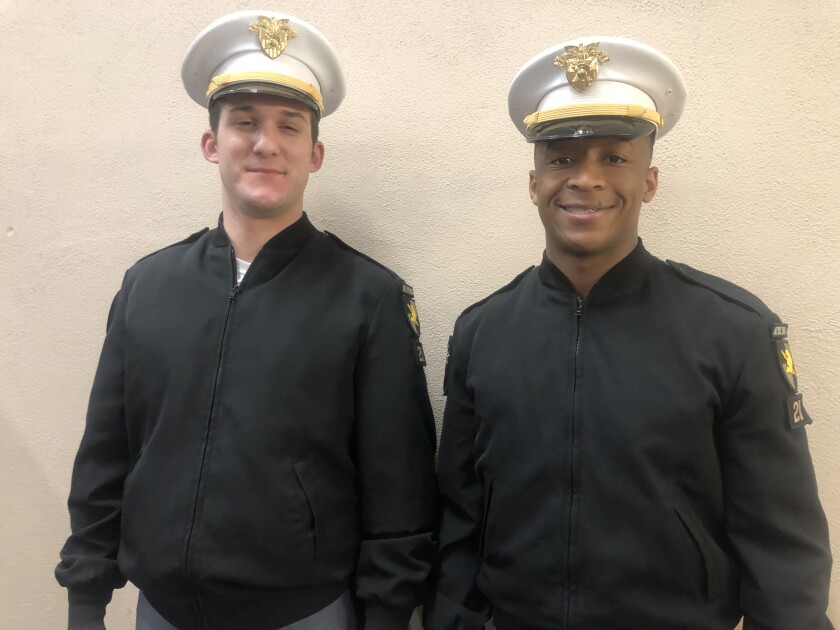 During a week in which the Houston Astros were punished for cheating and the impeachment trial of the 45th president of the United States moved to the Senate, two 20-year-old West Point cadets from the San Fernando Valley came to town to teach ethics and leadership skills to a group of Los Angeles Unified School District middle school and high school students.

Jordan Blackman and Nick Ghazarian played football at Panorama City St. Genevieve and Encino Crespi, respectively, and they seemed comfortable, confident and convincing in the message they wanted to preach last Friday to their young audience of boys and girls during a workshop at Stephen M. White Middle School in Carson.

“My definition of integrity is being the same person you are behind closed doors as you are in public,” Blackman said. “What that means is transparency, honesty. There’s always going to be ambiguous situations that challenge your ethical code. The purpose of [our visit] today is to build a foundation for you to encounter situations and know how to think through those and analyze the situation and overcome that and just still be true to yourself.”

Said Ghazarian: “We’re here to give them a foundation ... on how to make ethical decisions in really tough situations. The world isn’t black and white. It’s gray, as we all know. We want to give these kids an ability to navigate themselves through this gray, murky water of making decisions in life.”

Blackman was the student body president at St. Genevieve and a top defensive back who’s still playing football for Army. Ghazarian was a defensive end at Crespi who stopped playing football at Army after an injury. Both had grade-point averages well above 4.0 and faced the challenge of getting through their plebe year.

“That’s where we have to cup our hands, we have to walk in formation and we get yelled at a lot for messing up by upperclassmen,” Ghazarian said. “I will say ... sometimes I had thoughts maybe this isn’t right for me, but at the end of the day, I’m really happy I stuck with it. I love the institution and what it stands for.”

Said Blackman: “Day in, day out, we’re hit with a lot of different tasks, and we have to accomplish them. Our plebe year is all about adjustment and balancing everything. The curriculum is to put as much pressure on you as possible to see if you can endure and persevere.”

Each said football helped prepare them for the emotional and physical challenges they facing as cadets.

“The biggest thing football does for you is it teaches you how to improvise on the fly so you can still perform at a high level even though the things you did prepare for aren’t in front of you,” Blackman said.

Said Ghazarian: “I know in football, being under that high stress allows you to keep composure under pressure.”

They’re one year away from graduation and becoming second lieutenants. Blackman wants to go into military intelligence. Ghazarian wants to work in field artillery. They are examples of the best and brightest at a time when young people are wondering how to proceed in a world full of mixed messages.

“Honesty and transparency, that will always guide you in the right direction,” Blackman said. “We’re going to make mistakes, bad decisions. However, it’s how you learn from those mistakes and grow and continue to move forward and teach those around you how to be accountable for their actions as well.”