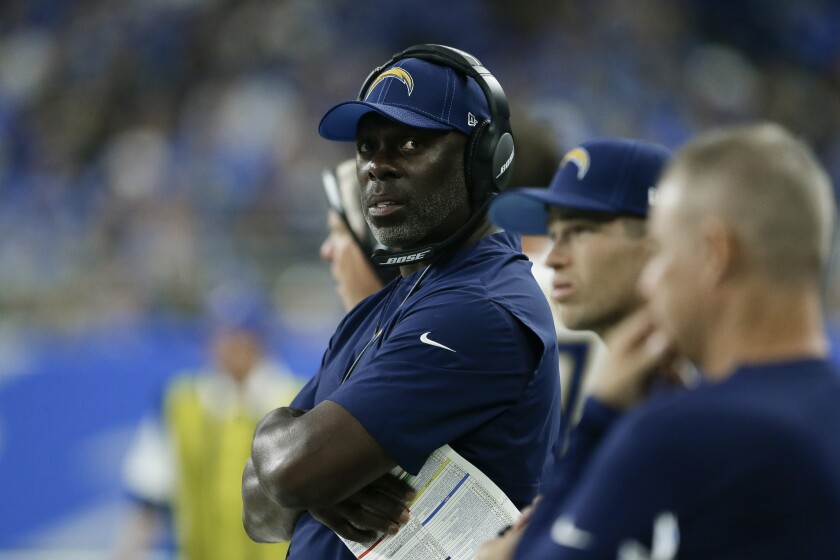 Column: With Philip Rivers gone, Anthony Lynn is the face of the Chargers

Anyone who has had the pleasure of assembling a piece of IKEA furniture is aware of two things: One, there are no shortcuts; and two: it can be incredibly frustrating.

If the instructions say “turn to the left two-and-a-half times” and you foolishly believe two twists are good enough, a chair leg might fall off. Twist it three times and the whole thing might explode. This is why having one of those stores in plain view of Los Angeles Chargers head coach Anthony Lynn’s office is the perfect metaphor.

Consider this: The team announced it was leaving San Diego within the same breath it named him head coach. Earlier this week the team announced Phillip Rivers is not coming back. Of its 22 losses since Lynn was hired in 2017, nine have been decided by three points or less, revealing an incredible inability to win close games.

No shortcuts for Lynn and company, but plenty of frustrations.

All this makes the Texas native the perfect handyman in this analogy, and why the team extended his contract.

“I’m not going to lie. There were times I wanted to pull my hair out, but I don’t have any so all I could do was work harder,” Lynn joked. “My first year we were missing field goals left and right but this team never gave up. We started 0-4 but went 9-7.

“Then we go to 12-4 the following year and get beat by the team that wins the Super Bowl. Yeah, we had a down year last season but we don’t flinch. We keep fighting. The team got tougher, played smarter and, like I said, more games are lost than won in this league, and we don’t make a habit of losing games.”

It’s statements such as these — about winning and losing — that reminds you of Denzel Washington from the movie, “Remember The Titans.” He’s inspirational without being syrupy. Confident but not cocky. A leader in every sense of the word except for one: he doesn’t like being in the spotlight.

That’s something he acknowledges is a tricky situation given that, for the time being at least, he’s the face of the franchise.

Tyrod Taylor is in the best position to be the new starting quarterback but he’s not a star in the league. Owner Dean Spanos can provide a saucy quote or two, but he’s not the sound bite machine the Dallas Cowboys’ Jerry Jones is nor is he as recognizable as the New England Patriots’ Robert Kraft.

So it is up to Lynn.

“The face of the franchise is someone that’s always out in front of the media representing the team in a positive way,” Lynn said. “But that can be a full-time job. For me, I’ve always just wanted to coach football. I also believe in helping people and serving others and being a blessing to others. Some of the things that I’ve done over the years have been put out there in the spotlight, but that’s not why I do them.

“I love giving back. I love helping my community where I live but at the same time, I’m a football coach. And I don’t look to do all this ... for publicity. That’s just the way I was raised, and I’m not going to be able to stop doing that — that’s just who I am.

“But my priority is to win football games and win a championship as a coach. I’ve won two as a player [in Denver], and I know what’s it’s like to be there. My goal is to get as many as I can as a coach, so this organization and these young men can experience that for themselves, as well. That’s my gift … I want to help win a damn Super Bowl.”

But there are no shortcuts.

The Chargers didn’t just come up short in close games, they turned snatching defeat from the jaws of victory into an art form. And that was when the Chargers had a quarterback who is Hall of Fame bound. Now Lynn must find a way to get a city that didn’t want his team to begin with to care while inhabiting a spotlight that makes him uncomfortable.

If the Chargers were to somehow land a free agent with brand recognition, for instance someone such as Tom Brady, that would certainly help. If they could pry Cam Newton from the Carolina Panthers, that would be a good football and marketing move as well. But the first black head coach in team history said he’s good with the talent they have.

Speaking of being black …

“Just because you have X number of black players, that doesn’t mean that a high percentage of those black players go into coaching,” he said, when asked about the controversy regarding the lack of minority head coaches. “I don’t think you need X amount of black coaches to go with X amount of black players. I just think you need the best man for the damn job. And I’ve been saying this for a long time and one of the reasons why I don’t like to do some of these interviews about the hiring process is people never really write what I say.”

I assure him I’m going to write exactly what he says.

“I think the criteria for how we go about hiring a head coach in the National Football League may be a little outdated. I mean, we’re changing six, seven, eight guys a year, right? I think being a coordinator has nothing to do with being a good head coach. I think a coordinator’s skill-set and a head coach’s skill-set are completely different. So if we open the interview process up to more assistant coaches, and not just coordinators, then I think there will be more opportunities for minorities to become head coaches.

“I was a position coach and assistant head coach all of my career. I become a coordinator for one year and then was hired as a head coach because I checked that box. But did that one year make me a better head coach? I don’t think so.”

Lynn said the current approach prevents many white assistant coaches from getting the opportunity to move up as well.

“The most important quality is being a leader, not being a play caller. You can hire someone to call plays.”

A smile crawls across his face as he sinks deeper into the couch. An hour has passed, but it feels like 10 minutes. Lynn is a great storyteller. His laugh fills a space but not in an intrusive way. No, it’s the kind of laugh that invites you to join in the fun.

He might not want to be the focal point but he’s damn good at it.