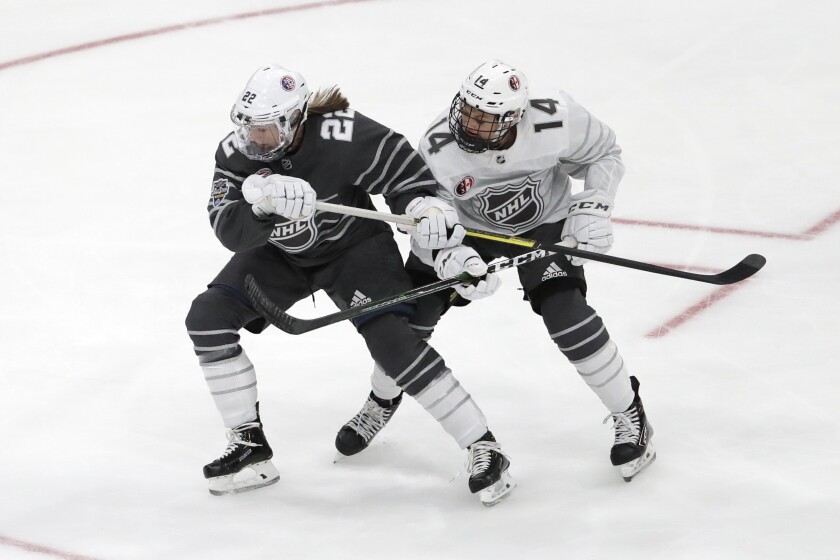 The NHL’s All-Star skills event managed to be frivolous yet significant, a lighthearted show that made a serious statement when it gave elite female hockey players a prominent role in celebrating the sport’s best.

There were the usual contests for the fastest skater, hardest shot, most accurate shooter and most consecutive saves by a goaltender. Happily for fans at Enterprise Center, Blues goalie Jordan Binnington won the save streak contest by stopping 10 straight breakaways. Tomas Hertl took a shot while wearing a Justin Bieber mask, and if players let Binnington have an easy time, there was no harm in that.

Many players had their children with them. Anze Kopitar, the lone representative of the two Southern California teams, had his daughter Neza and son Jakob close by. “It was pure joy,” Kopitar said with a smile rarely seen during the Kings’ difficult season.

One new wrinkle this year was the Shooting Stars contest, in which NHL and female players stood on platforms above the ice and shot at targets for points. Not really a hockey skill, but it became a fun moment when retired Blues forward Keith Tkachuk joined his sons Matthew (Calgary) and Brady (Ottawa). Chicago’s Patrick Kane won.

The three-on-three mini-game between elite female players from the United States and Canada stood above the gimmicks. The fact that Canada won 2-1 was less important than the women getting favorable attention.

“It’s awesome that they’re here and they get to experience this, but also to grow the game and understand that hockey is for everyone,” Dallas Stars forward Tyler Seguin said. “I have two little sisters that play hockey. I’ve been at many women’s hockey games. There’s a lot of skill out there.”

This was the third straight All-Star weekend the NHL has invited female players. After U.S. forward Kendall Coyne Schofield finished seventh last year in the fastest skater event, the NHL smartly took note of the positive reaction to her effort. The boost is powerful, whether the league decided women are an untapped market or it’s genuinely interested in helping the women’s game advance.

“The fact that we can shine, using our light, a brighter light on the women’s game is, I think, a positive for them, for the game and for the young girls watching and aspiring to do the same thing,” NHL commissioner Gary Bettman said.

It was too bad they played only two 10-minute periods of running time but they’ll play a full contest at Honda Center on Feb. 8 in the finale of their fierce rivalry series. For their participation here the NHL promised to split a $100,000 donation between USA Hockey and Hockey Canada. The U.S. goal was scored by Hilary Knight on a setup from Annie Pankowski of Laguna Hills.

“When you watch the women’s game there’s perceptions maybe it’s slower. It’s not as physical. They’re not as talented. They’re not as big. We’ve heard it all our whole life,” Coyne said. “I would say we’re equally as entertaining. ... There’s 20 of us here but a heck of a lot more incredible women who aren’t here this weekend.”

Coyne is among the top players who are sitting out the National Women’s Hockey League season in hopes they can build a stable league that will pay better salaries. “The NHL is helping us get the exposure that we need and I think the partnership is there,” said Canada forward Rebecca Johnston, who scored the first goal on Friday. “It’s not something you can just build overnight.”

Being seen on Friday could accelerate that plan. “Definitely they should come back next year and get them more involved,” Nashville Predators defenseman Roman Josi said.

The other winners on Friday were Montreal’s Shea Weber (hardest shot, 106.5 mph); Carolina’s Jaccob Slavin of Carolina (accuracy, five targets in 9.505 seconds); and the New York Islanders’ Mathew Barzal (fastest skater, 13.175 seconds). The league announced next year’s game will be hosted by the Panthers in Sunrise, Fla.

Bettman, speaking at a news conference before the skills events, praised the state of the league.

“Simply stated, it has never been better,” he said, calling the competitive balance “the best in all of sports.” He said arrangements are underway to establish a hotline that will allow players to anonymously report abusive behavior by coaches. The league also is determining the content of training programs it mandated for all coaches and personnel following the disclosure that former Calgary coach Bill Peters was verbally abusive toward former NHL player Akim Aliu.

Bettman also said he expected to “reengage shortly” with the NHL Players’ Assn. to discuss a new collective bargaining agreement. The league and the NHLPA agreed to keep the current agreement, which expires Sept. 15, 2022.

In addition, he downplayed an August deadline issued by Rene Fasel, president of the International Ice Hockey Federation, for the NHL to declare if it will send players to the 2022 Winter Olympics in Beijing.

“He also said last summer that he wanted an answer by December and he didn’t get one. So we’re going to have to see,” Bettman said. “We believe our experience both in going to five Olympics and not going to Pyeongchang [in 2018] tells us that going is extremely disruptive to the season. You’ve all heard me say it. We were very comfortable with not going.”

Female players have the Olympics to look forward to and the world championships but few other highly competitive events. Being included in the NHL All-Star events was a useful and welcome showcase for them, one that should continue to grow.