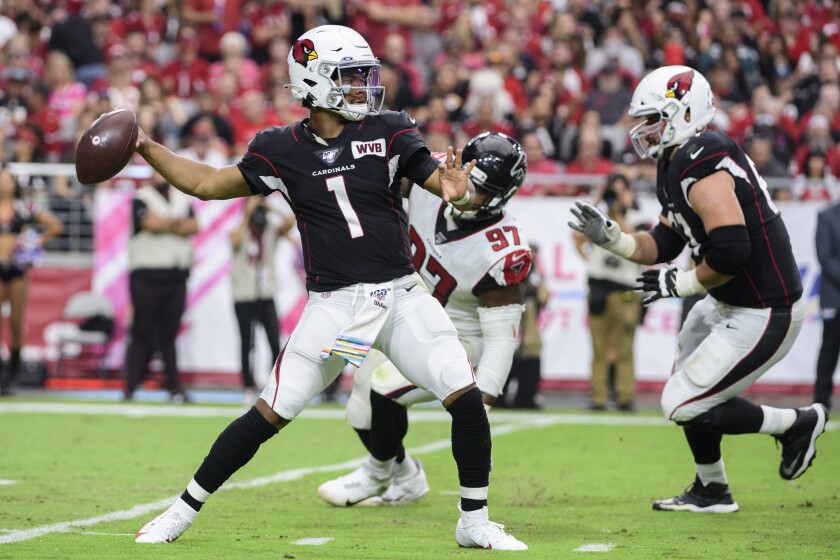 Column: Young quarterbacks are taking over the NFL. What’s fueling the phenomenon?

Suddenly, the most demanding position in sports looks like child’s play.

Kyler Murray, rookie quarterback for the Arizona Cardinals, throws for 340 yards and three touchdowns in a victory over Atlanta, earning NFC Player of the Week honors.

Gardner Minshew, a sixth-round pick for the Jacksonville Jaguars, gets off to the best start of any rookie quarterback in the 100-year history of the NFL. He had the highest completion percentage (73.8%) and passer rating (110.6) of any quarterback in his first three games.

Kyle Allen, who signed with the Panthers last year as an undrafted free agent, has nine touchdowns and no interceptions in five starts — all Carolina victories.

Devlin Hodges, an undrafted rookie and champion duck caller, comes across the country and leads the Pittsburgh Steelers to a victory over the Chargers.

With some occasional exceptions, it used to be that young NFL quarterbacks put on a ballcap, picked up a clipboard, and watched their more seasoned teammates from the sideline.

Not so anymore. Half the No. 1 quarterbacks in the league are in their third year or less as full-time starters. Sunday’s matchup between the Cardinals and New York Giants features No. 1 pick Murray on one side, and Daniel Jones, taken sixth by the Giants, on the other.

There have been 77 games this season featuring at least one starting quarterback age 26 or younger, the most at this point in NFL history. The 54 games started and won by quarterbacks in that age bracket is the most since at least the 1970 merger between the AFL and NFL.

So why are young quarterbacks, even unheralded ones, so prepared to launch these surgical strikes?

Is it superior training? Simplified playbooks? Handcuffed defenses? The influence of college football on the pros?

Maybe all of those factors.

“This isn’t a get-off-my-lawn situation, and I’m not saying the old days were better,” said Hall of Fame quarterback Steve Young, now a “Monday Night Football” analyst. “These are just the facts: I remember thinking when I was at BYU that everyone was open. No one was ever covered. You just throw the ball. Then I went pro, and no one’s open. I mean no one.

“I remember saying to my coach [Bill Walsh of the San Francisco 49ers], `Bill, no one’s open.’ He’s like, `Bro, no one is ever going to be open. You’ve got to figure it out.’

“I’m watching the Rams and the Chiefs, I go Monday nights and I watch every team. Yards are so much cheaper now. People are open.”

There are multiple reasons why. A big one is that rules put in place to protect the quarterback and defenseless receivers have changed the nature of defenses and made the middle of the field a safer place to operate. If there’s a headhunter lurking in that neighborhood now, there will be a FedEx envelope with a hefty fine waiting at his locker next week.

“On top of that, the protections that receivers and defenseless players have, they don’t have to be scared if it’s a jump ball.

“Those guys had to deal with the NFL when it was a man’s game. Now, guys can’t lay on you. Then, they could lay into you. There were no protections. There was roughing the passer if you got there late or it was egregious, but for the most part they had to take a beating and still go out there and execute.”

Of course, the league has good reasons to implement the safety rules. The collisions are increasingly violent as players get bigger and faster, and head injuries can have catastrophic effects. But the rules also have created a halo around offensive players.

“It’s making it almost impossible to play defense,” Sherman said. “Now, you just have to have defenders out on the field, doing the best that they can. But at any given time, and on any given play, the officials are going to get involved. Even on a play that looks like a clean one, there’s a penalty. That’s why guys are more open.”

Fox analyst Troy Aikman points to the influence of the college game on the NFL as a reason quarterbacks are able to transition to the pros so seamlessly.

“I thought there was a time when the NFL influenced what was happening in college,” said Aikman, who spent his Hall of Fame career with the Dallas Cowboys. “Now, it’s other way around. The college game is affecting and impacting what’s happening in the NFL.”

That includes run-pass options, or RPOs, when a quarterback makes the decision to either run or throw in a play designed with options for both. That came from college football, and every NFL team has a version of the concept.

“If you get a guy that has a pretty good offensive line and a good back, they can play fake and the first guy is open,” Young said. “Just like in college. In that way, the league has figured out a way to make the space available for a lot more quarterbacks to be good — and faster.

The NFL is filled with young offensive-minded head coaches who specialize in quarterbacks — among them Sean McVay (Rams), Kliff Kingsbury (Cardinals), Matt Nagy (Chicago), Matt LaFleur (Green Bay), and Zac Taylor (Cincinnati) — and that helps young players in making the transition. For instance, Kingsbury imported a lot of the same terms and playbook language Murray had in college.

“Coming from where he was at, Texas A&M and then Oklahoma where they give him that freedom, there’s a comfort level that he’s had with that,” Kingsbury said. “Coming from similar systems and having that attacking mindset, if you see a better play, get us into it. He’s been comfortable from day one. In the spring, he was checking plays that I don’t even think our guys knew. He’s just very confident in that approach.”

Murray chose the NFL over Major League Baseball. But there are a lot of quarterbacks these days who work year-round on one sport, and a singular discipline. It wasn’t always that way.

“These quarterbacks get a lot more reps leading into college, then throughout college, than I ever did,” Aikman said. “I equate it to when my girls were young they played soccer. Then in the winter, they played indoor soccer. The indoor soccer fields were smaller and there were fewer girls playing on a side, so everyone got more touches. And their foot skills and ball-control skills improved immensely.

“I think the same thing happens with quarterbacks. There’s a comfort level now.”

Before the Giants played on Thursday night last week, Aikman met with their rookie quarterback — nicknamed “Danny Dimes” for his accurate deep passes — and asked what were the toughest parts of making the move up.

“I said, ‘I know what it was like for me when I came into the league 30 years ago. Sometimes I didn’t even know what the hell I was looking at. You just drop back and act like you’re reading defenses, then you take off scrambling,’ ” said the former No. 1 overall pick from UCLA.

“He said, ‘Yeah, it’s a little different.’ But the biggest difference for him is he had never taken a snap from under center in high school or college. … Short of that, for the most part, it was not so foreign for him as it was for me.”

Under the previous collective bargaining agreement, coaches had much more time to work with their players during the season and offseason. The current CBA allows for more practice time for rookies than veterans, but there are still strict limits. By necessity, then, playbooks have to be simplified. That too eases the transition for inexperienced players.

“So coaches tend to capitulate. ‘Let’s put some things together. We’ll be really good at four things, and off we go.’ That’s exactly what college does. So the game has become more college-like.”

The game might be simpler now in some respects, but the expectations are absurdly high as are the pressures. Spend some time on Twitter and see.

“We try to draw conclusions, definitive statements on quarterbacks, two or three games into their careers,” Aikman said. “Forget a season, which was unheard of before.

“The scrutiny is unbelievable. Teams feel like they need to declare much sooner, ‘Is this our guy or not our guy? Because we’re building this whole thing about him. We can’t get this wrong.’ So there’s a lot of pressure on these guys. I do feel there needs to be a little bit of a grace period.”

Back in the 1990s, and as recently as a decade ago, there was a lot of hand wringing in league circles that there weren’t enough good quarterbacks to go around. That talk has largely dwindled as the wave of young players has swelled.

“This is the best news in the world for the league, because what the league desperately needed was quarterbacks,” Young said. “The game is being made for more good quarterbacks. There’s going to be 25 guys, 30 even. Maybe every team will have a decent quarterback.”

Nonetheless, there’s a long way from decent to great.

“The sophistication that’s needed to be great is still out there as a challenge,” Young said. “The entry level — because of safety, because no one’s patrolling the middle of the field, because the game’s more college-like, because players can’t spend time with coaches anymore — it’s allowed more entry-level guys.

“But I still believe to be great, it’s still an Everest climb. If you’re going to be in the handful of Hall of Fame guys, the rigor is still out there.”