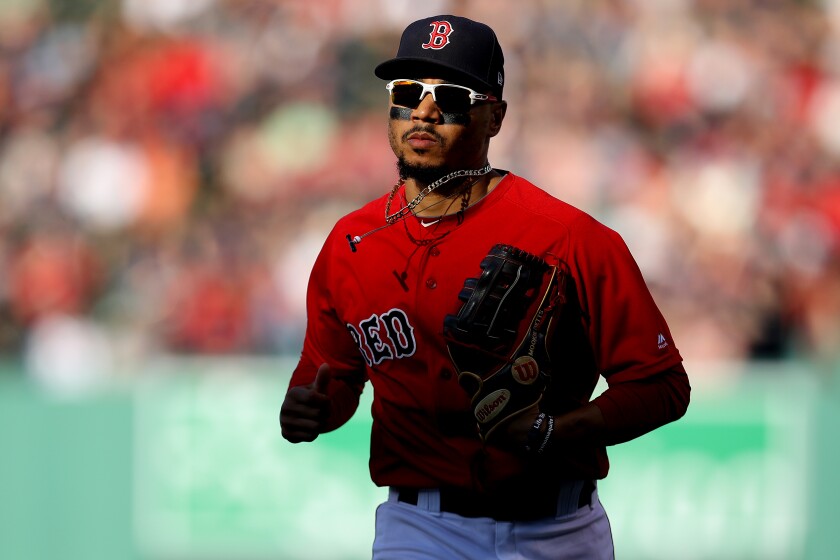 Commentary: Dodgers win the offseason with one swing by acquiring superstar Mookie Betts

This is for you, the Dodgers fan that cursed when your team shrugged at trading for Justin Verlander.

This is for you, the Dodgers fan that wailed when your team went shopping for an outfielder last offseason and came home with A.J. Pollock instead of Bryce Harper.

This is for you, the Dodgers fan that muttered at the sight of all those news conferences in other places this offseason: Gerrit Cole in New York, Stephen Strasburg in Washington, Anthony Rendon in Anaheim.

Yes, this is for you, a present in observance of Groundhog Day. You’re not getting six more weeks of winter, or six more lectures about financial flexibility, or six more seasons of luxury-tax avoidance.

You’re not getting the traditional offseason talking point from the Dodgers, the National League West champions for seven consecutive years. Why act now, they liked to say, when we can conserve our resources and acquire a player in the middle of the season?

Even as the do-nothing Dodgers, they were the overwhelming NL favorites. Before the trade, Las Vegas oddsmakers put the over-under on the Dodgers’ victories this year at 98½, with no other NL team above 91½. At Fangraphs, the projected team WAR rankings had the Houston Astros first, the Dodgers second and no other NL team in the top six.

But the best move the Dodgers could make to get better in October presented itself now, and the Dodgers swooped. With Betts and Cody Bellinger, the Dodgers have the two best outfielders in the major leagues not named Mike Trout or Christian Yelich.

And they gave up only second-year outfielder Alex Verdugo and pitcher Kenta Maeda. Both are solid players, but don’t have nearly the credentials of Betts and David Price, the veteran starting pitcher who is L.A.-bound as well. All of the Dodgers’ minor league prospects remain with the organization.

We should mention that this trade is an abject betrayal of the fans in Boston, who pay the highest ticket prices in the major leagues. The Red Sox are good enough to challenge for a playoff spot this year.

In explaining last month why the team might trade its best player before the season started rather than wait to see how the season played out, Ken Rosenthal wrote in the Athletic of the “risk” that “the Red Sox might get off to a hot start that would make it all but impossible for them to rationalize moving him.”

Betts is eligible for free agency after the season, and the Red Sox had not been able to sign him to a new contract. They believed it would be better to get players for him now, and lose his salary, rather than play out the season with him and get only a draft pick if he left. If the Red Sox weaken their chance at a postseason spot in 2020, well, that’s too bad for the Boston fans. Enjoy the clam chowder!

Chaim Bloom, the new head of baseball operations in Boston, was hired from the Tampa Bay Rays, where he had worked for Andrew Friedman, the Dodgers’ head of baseball operations. If Friedman schooled Bloom in one lesson, it is this: The low-budget Rays would not have been able to compete so effectively against the Red Sox and New York Yankees had the Red Sox and Yankees not cluttered their roster with veteran players with high salaries — financial inflexibility, if you will.

Maybe Verdugo, something of a surplus outfielder here, develops into a star in Boston. You never know.

In his first winter running the Dodgers, Friedman dumped the popular but expensive Matt Kemp, trading him to the San Diego Padres for a catcher coming off a .225 season. Yasmani Grandal worked out just fine.

Of the Dodgers’ top five starting pitchers last season, Walker Buehler was the only one under 30 years old. This season, the rotation could feature four pitchers under 30: Buehler, Julio Urias, Alex Wood and Dustin May.

Rich Hill did not do so last year, and neither did Maeda. Hill is 39, Maeda is 32, and now both pitch for the Minnesota Twins. Joc Pederson, 27, is one year from free agency, and for now he is an Angel in the outfield, alongside Trout, dealt to the Halos on Tuesday for infielder Luis Rengifo.

The goal is to take advantage of financial flexibility, not just to brag about having it. With this trade, Friedman took advantage of his.

And he traded for the best player available without compromising his guiding principles: Thou shalt not trade your very best prospects, and thou shalt not guarantee too many years and too many dollars to a player on the wrong side of 30.

If Bloom can win while trimming what the Boston owners consider a bloated payroll, more power to him. Friedman did it here, and last offseason the Dodgers cleared roster clutter and added two prospects in a trade with the Cincinnati Reds. In order to complete the deal, the Dodgers paid pitcher Homer Bailey $23 million not to play for them last year.

By that standard, paying Betts $27 million to play for them this year is an absolute steal. And, because he is not signed beyond this year, Friedman keeps his streak alive. Since he joined the Dodgers in 2014, they never have committed $100 million or more to one player.

With Betts, maybe they will. He’s 27. They could offer him an extension, although the opening bid might be $350 million.

But the Dodgers also would be quite happy if Betts does this year what Rendon did last year: help his team win a World Series, wave heartily in the championship parade, then sign for hundreds of millions somewhere else.