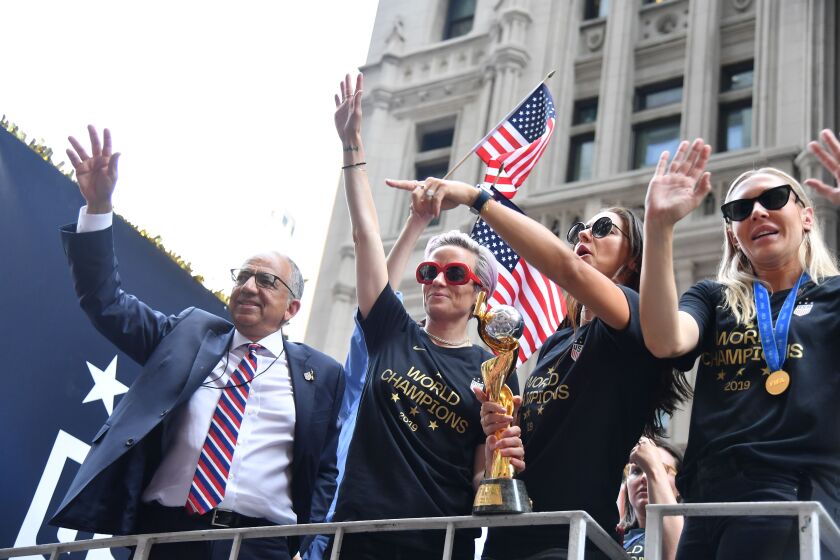 The organization is without a CEO or full-time coaches for 13 of its 14 age-group national teams and has an operational deficit that is expected to top $20 million for the 2020 fiscal year thanks to a half-dozen high-profile lawsuits. It is also entering a second year without a labor contract for its men’s national team, and inside the federation’s Chicago headquarters, the work environment had grown so toxic that a consulting firm was hired to catalog all the complaints.

“It’s been a tough time to be associated with U.S. Soccer,” said Carlos Bocanegra, a member of the U.S. Soccer board.

The situation saddens, but doesn’t surprise, Kyle Martino, a former national team midfielder who ran an unsuccessful campaign to be the federation’s president two years ago.

“We’re in a worrying situation,” he said. “I feel, as others feel, we’re only getting bad news.”

There’s been plenty of that.

The men’s national team, which failed to qualify for the last World Cup in 2018, struggled in its first year under coach Gregg Berhalter, losing to Canada for the first time since 1985. And while the U-20 national team reached the quarterfinals of its World Cup, the U-17 team didn’t win a game and scored only one goal in its tournament.

The women’s national team made history with an undefeated run to its second consecutive world championship last summer in France, but for much of that World Cup run the focus was on the players’ pay-equity lawsuit against the federation. That suit, scheduled to go to trial in May, is one of six major legal challenges U.S. Soccer is facing, among them a discrimination suit brought by former player Hope Solo and antitrust claims from the North American Soccer League and soccer promoter Relevent Sports.

The distractions are something U.S. Soccer can ill afford heading into what should be a pivotal year.

Later this month, the women’s team will open qualifying for the 2020 Tokyo Olympics, where it can become the first team to win World Cup and Olympics titles in consecutive years. Berhalter’s team, still trying to find its footing, will gather Sunday in Qatar for training camp as it prepares to enter qualifying in the fall for the 2022 World Cup.

Between now and then is the men’s qualifying tournament for the Olympic Games, a tournament the U.S. has played in just once since 2000.

Carlos Cordeiro, the federation’s president, defended the organization during a meeting of its board of directors last month, saying he thought it was “unfair to characterize us as being leaderless and in crisis.”

Five months after being elected in 2018, Cordeiro led a successful campaign to bring the World Cup back to North America in 2026, when it will be co-hosted by the U.S., Mexico and Canada. And despite the projected deficit in spending in the current fiscal year, the federation’s budget estimates a year-end surplus of $139.9 million.

Martino, a soccer analyst for NBC, doesn’t blame Cordeiro for all of U.S. Soccer’s woes. “If I take a step back, I do see signs of genuine interest and the requisite humility to admit where U.S. Soccer is broken and [to] try to fix it,” Martino said. But, he added, “there are decisions that are being made that are worrying.”

One example: the decision to form a Youth Soccer Task Force, then expand it to 59 members, only one of whom — Cordeiro, who was born in India to a Colombian mother — is Latino. This in a country where about 25% of those 18 or younger are Latino and in a federation where 40% of the players in the boys’ youth national teams program are Latino.

The culture in and around the federation clearly has to change.

Too many important resolutions have been made without input from the people directly affected or advice from the most knowledgeable people on the topic. Too much emphasis has been put on the senior national teams and not enough on the developmental foundation that supports them. Too much time has been spent explaining or excusing problems rather than solving them.

“It’s the lack of transparency and the lack of cogent and intelligent explanation for decisions that seem baffling,” Martino said.

Whether Cordeiro ultimately succeeds or fails could hinge on who he chooses to fill the vacant CEO position, a decision that has been looming since the fall of 2018 when Dan Flynn, 64, announced his intention to retire after 19 years in the job.

Among the candidates is Jay Berhalter, the federation’s longtime chief commercial officer and brother of the national team coach.

“We don’t want to rush an appointment and then find out it’s the wrong appointment,” Cordeiro said.

Yet, time is not a luxury that U.S. Soccer enjoys, since preparation for the lawsuits is already well underway and talks for a new collective bargaining agreement with the men’s team are also in progress.

Although the sides appear far apart on a work agreement, success there could lead to breakthrough in the wage dispute between the USSF and the women’s team.

The federation must also untangle itself from the baffling decision of Earnie Stewart, U.S. Soccer’s sporting director, to require all full-time national team coaches to live in the Chicago area.

That demand led many youth coaches to allow their contracts with the federation to expire rather than relocate. When Tab Ramos, the youth teams’ technical director, left to take over the MLS Houston Dynamo in October, the U-20 team was forced to sit out the fall international window; U-17 coach Raphael Wicky followed him just after Christmas, quitting to join the Chicago Fire.

Cordeiro’s priorities for 2020 must include an effort to stabilize the organization’s developmental leadership. Any hope for future recovery starts there.