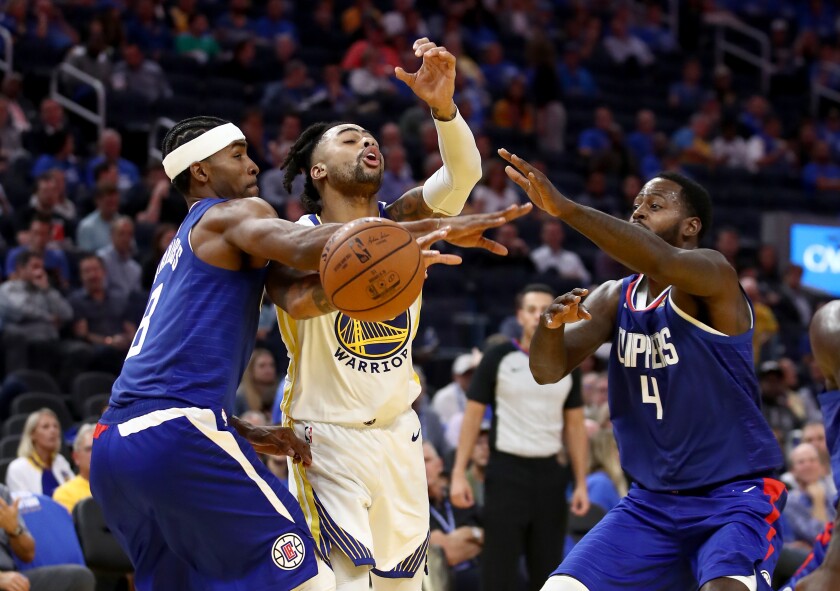 Teams in all professional sports express a desire in having a clear-cut identity, the baseline of what a team is all about and the foundation on which all things can be built.

Last season, the Clippers overflowed with it — an underdog team that fought like it was being held under water, flailing and swinging for every breath with an unmatched intensity and desperation.

It was clearest in their first-round playoff series last spring with the Golden State Warriors — the massive favorite and the top seed in the Western Conference. In that six-game series, the Clippers were the ultimate nuisance.

The Golden State Warriors that come to Staples Center on Friday are completely different — Kevin Durant gone, Stephen Curry and Klay Thompson shelved with injures — just like the Clippers.

It’s the second time the teams have met this season. The first time, in Golden State’s season opener, the Clippers led by more than 30 points. The expectations won’t be much different Friday.

Not with Kawhi Leonard and Paul George added to the group of overachievers from a season ago. Rivers is getting sick of talking about it.

For as much as last year’s Clippers team defined how the organization views and markets itself — as hard-working, gritty, without glitz and flashiness — Rivers and the Clippers know that they’ve graduated with upgraded talent.

It’s a long-held belief for Rivers that even if the roster is exactly the same, each team is new and the challenges that come with it are different.

If the Clippers need proof of how quickly things can change, Friday should be a good reminder.

Golden State has the worst record in the Western Conference after falling short in last season’s NBA Finals, the embers of any Clippers-Warriors rivalry extinguished until Curry and Thompson get back on the floor.

The Clippers have navigated the first half of the season with an eye toward the playoffs, while the Warriors have the top of the 2020 NBA draft in their sight, not that it’ll spark any sympathy inside the Clippers’ locker room.

“It’s the cards and how they’re dealt this year,” Patrick Beverley said. “ … When other teams were hurt and they were preparing for teams, they didn’t really give a [care]. They were coming in here and taking care of business. That’s our mind-set also.

"… You ask anyone in my household, I prepare every game like I’m going against Steph Curry, Kevin Durant, Michael Jordan, Karl Malone and Shaquille O’Neal. That’s my mind-set when I’m going into battle against a team.”

Held up against the mirror of last season’s team and playoff run, it’s not hard to imagine everyone in a Clippers’ uniform operating that way out of necessity. It would take that kind of focus, that kind of intensity and energy to survive.

That’s not the case this season, and it’s not Rivers’ biggest concern. The team is trying to create as much continuity as possible with a limited amount of practice time and a roster that has only played a few games together. Execution, schemes, late-second defense — that’s the stuff the team needs to improve.

Mentality? Rivers just isn’t buying it. Because when his team has been locked in — which they’ll certainly be when the games mean the most — the Clippers have delivered.

Update: The Warriors (9-30), owners of the second-worst record in the NBA, have lost six in a row since beating the Phoenix Suns on Dec. 27 for a season-high four-game winning streak. Former Laker D’Angelo Russell is questionable because of a shoulder injury. He has missed the last five games and 17 overall this season with injuries. Draymond Green (ankle), who played in a 107-98 loss to Milwaukee on Wednesday, is listed at day to day and expected to play.