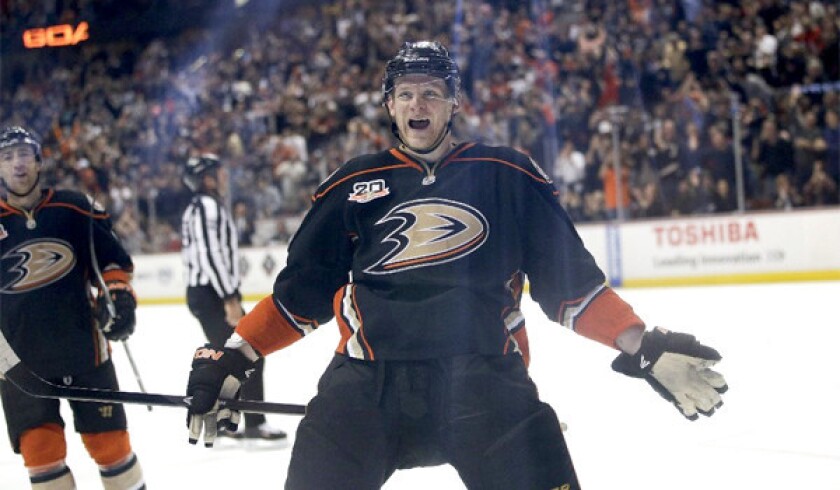 Corey Perry has a knack for getting under people’s skin, be it via jab, poke, check or a bit of trash talk.

But this time, as a visitor to Anaheim for the first in over 14 years, it was the Ducks who got to him.

Perry, who had the last two years of his contract bought out by the Ducks in June, was surprised before Thursday’s game between the Dallas Stars and Ducks at Honda Center by Anaheim’s brass, former teammates and 50 children from the Ducks’ Learn To Play hockey program, the team posted on Twitter with highlights from the reception.

Corey Perry got emotional as he was surprised prior to tonight's game by a gathering of former Ducks teammates, executives and 50 kids from the Learn to Play program co-sponsored by Perry and Ryan Getzlaf, as they honored his distinguished career in Anaheim and 1,000 NHL games. pic.twitter.com/QUv0PPPT1n

He was presented with a Hublot watch and longtime teammate Ryan Getzlaf handed him a large bottle of wine.

“Obviously, you’re going to be in Anaheim forever in our hearts and we want you to enjoy that at some party bud,” Getzlaf said of Perry, who recently appeared in his 1,000th regular-season game — 922 of which came as a member of the Ducks.

Perry recorded 751 points (359 goals and 392 assists) for the Ducks, which included a 50-goal season in 2010-11 when he led the league in scoring and received the Hart Trophy, given to the NHL’s most valuable player.

Said an emotional Perry in remarks just brief enough to hold back his tears: “I just want to thank everybody here, guys ... thank you.”

Perry didn’t play in Wednesday’s victory for the Stars 3-0 over the Ducks because of a five-game suspension for elbowing Nashville Predators defenseman Ryan Ellis during the first few minutes of the NHL Winter Classic at the Cotton Bowl on Jan. 1.

Perry has already appeared in more games this season for Dallas (34) than he did last season with the Ducks (31), when his season was cut short by a knee injury which required surgery.

Jakob Silfverberg will not be making his first appearance in the NHL All-Star game on Jan. 25 in St. Louis.

The Ducks announced Friday that Silfverberg had withdrawn from the showcase event because of the expected birth of his second child.

“It is an amazing honor to be selected for the All-Star game, and I’m very grateful to have been named,” Silfverberg said in a release from the Ducks. “The timing is such that my wife and I are expecting our second child in late January, and I feel it’s most important to be with my family at that time. Thank you to the NHL and the Ducks organization for their support and understanding.”

Because of the nature of his withdrawal, Silfverberg will not be suspended for one game, unlike Washington Capitals left wing Alex Ovechkin, who will be assessed a one-game suspension either prior to or immediately following the All-Star game, because of his decision to sit out of the game to rest a lower-body injury.

Max Pacioretty of the Vegas Golden Knights was selected to replace Silfverberg. Tomas Hertl of the San Jose Sharks will replace San Jose teammate Logan Couture, who broke his ankle on Tuesday.