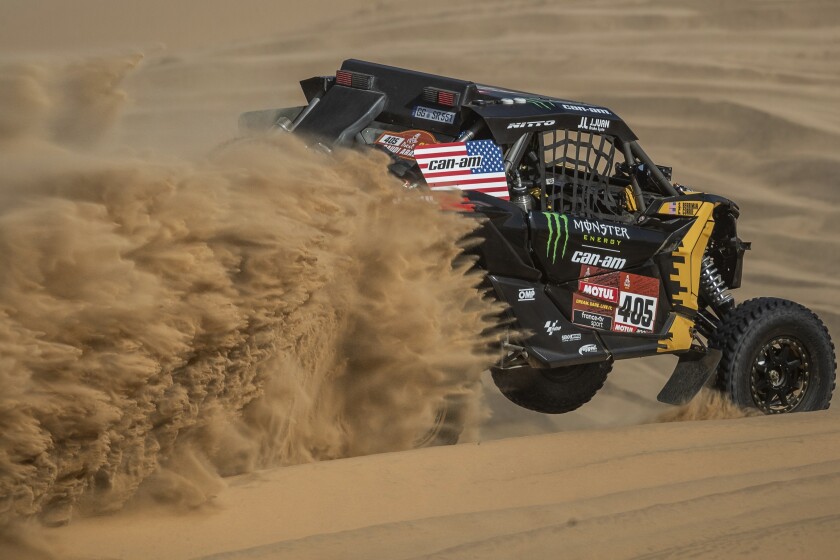 On an otherwise somber Monday at the Dakar Rally — racers mourning the death of a motorcyclist — Casey Currie navigated a dune-filled stretch of Saudi Arabia to finish with a 15-minute lead in the side-by-side vehicle class.

Currie, an off-road racer from Corona, is trying to become the first American to win in any class at the Dakar.

The 12-day “rally raid,” which also includes cars and trucks, ranks among the toughest events in all of motor sports. It is now two-thirds complete after the eighth stage, a 445-mile loop that began and ended in Wadi Al-Dawasir.

Currie and his co-driver, Sean Berriman, lost time replacing a broken axle and, later, an engine belt on the course. They still maintain a lead over teams from Chile and Russia.

Second-place driver Francisco “Chaleco” Lopez of Chile said: “The top three positions are very close. Every day if I can avoid having too many problems or anything broken on my car then I think it’s possible to win.”

The motorcycle and quad portion of Monday’s stage was canceled in honor of Paulo Goncalves, a Portuguese rider who crashed on the course Sunday. Medical personnel were flown by helicopter to the site of the accident and found the 40-year-old unconscious.

“Following resuscitation efforts in situ, the competitor was taken by helicopter to Layla Hospital, where he was sadly pronounced dead,” race officials said.

The Dakar Rally has a long, controversial history of fatalities, with dozens of racers killed in crashes and spectators struck on the roadside.

The event now moves to a 550-mile stage the stretches through oil-rich territory to the village of Haradh.