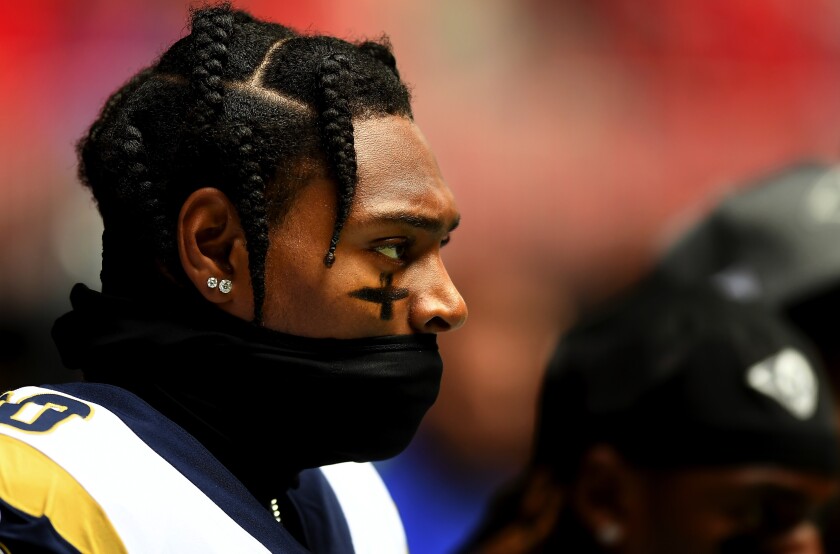 As a lockdown cornerback, Jalen Ramsey has impressed new Rams teammates with his skills and actions on the field.

He also regaled them with his words — especially those directed at opposing receivers.

On Monday, several players reveled in recounting Ramsey’s running commentary with Atlanta Falcons star Julio Jones during Sunday’s 37-10 Rams victory, which ended a three-game losing streak and improved the Rams’ record to 4-3 going into Sunday’s game against the Cincinnati Bengals in London.

Ramsey and Jones were “going at it,” linebacker Cory Littleton said.

“It was a good show for the fans and for myself, whenever I got a chance to look back,” Littleton, chuckling, told reporters at the team hotel. “He’s a great addition to this team, and he did his job.”

The Rams traded for Ramsey last week, giving the Jacksonville Jaguars two first-round draft picks and a fourth-round pick for a player regarded as one of the best players — and trash-talkers — at his position.

Jones caught six passes for 93 yards — one of them a 39-yarder — but some receptions came after Ramsey was out of the game.

“He’s always been talking trash and stuff — it’s part of what he does,” said Rams edge rusher Dante Fowler, who played with Ramsey for two-plus seasons with the Jaguars.

Fowler referenced Ramsey’s willingness as a rookie in 2016 to challenge then-veteran Baltimore Ravens receiver Steve Smith, a noted trash-talker himself.

“He’s a guy that don’t back down at all,” Fowler said of Ramsey.

“I love it when anybody’s jawing during the game,” he said. “It’s football. It makes it fun.”

Rams receiver Robert Woods played against Ramsey in 2017, but Woods said last week that he did not have any notable memories of verbal exchanges. On Monday, he noted that talk by cornerbacks can be antagonizing.

“You just got to be tough-skinned,” Woods said. “Jalen is definitely one who goes at you all game, about your socks, your cleats, whatever it is he’s got a problem with.

“If you take it personal, and really like feed into it, I think he’ll definitely keep going and he’ll go all game.”

Defensive tackle Aaron Donald said that he could not remember details that precipitated the incident.

Donald, however, could not escape memes and endlessly-looped video that showed him picking up and carrying Falcons running back Devonta Freeman.

The incident occurred after Littleton intercepted a tipped pass in the third quarter.

“Just barking back and forth, and one thing led to another and then he grabbed my facemask and I’m like, ‘All right,’ ” Donald said. “I just wanted to get him off my facemask.”

The 6-foot-1, 280-pound Donald placed his hands under Freeman’s shoulder pads and carried him a few yards as the 5-8, 208-pound Freeman helplessly moved his legs and feet as if riding a bicycle.

Donald was in position to possibly throw Freeman to the ground, but he opted to set him down.

“Once I picked him up, I was like, ‘I can’t,’ ” Donald said. “I didn’t want to throw no punches and get myself kicked out of the game and hurt my team.

“I’ve been through there before and made dumb mistakes. I wasn’t going to let that happen again.”

Both players were penalized for unnecessary roughness. Freeman was ejected for throwing a punch.

Donald went on to record a fourth-quarter sack. He also forced a fumble on the play, and quarterback Matt Ryan was knocked out of the game because of an ankle injury.

The Rams “came away clean” without significant injuries, coach Sean McVay said. ... McVay praised safeties Taylor Rapp and Marqui Christian for the job they did filling the void left by injured John Johnson. ... Woods said running back Todd Gurley’s over-the-shoulder touchdown reception was an “amazing” catch. “One, the catch, and then just how close he was to the sideline to still get his feet in,” Woods said. “And he’s a running back.” Woods noted that Gurley had previously expressed reservations about running that play, which the Rams have practiced for several years. “We finally got to it, and it came up big for us,” Woods said. ... The Rams are off Tuesday. They will practice Wednesday and Thursday at Georgia Tech before departing for London.