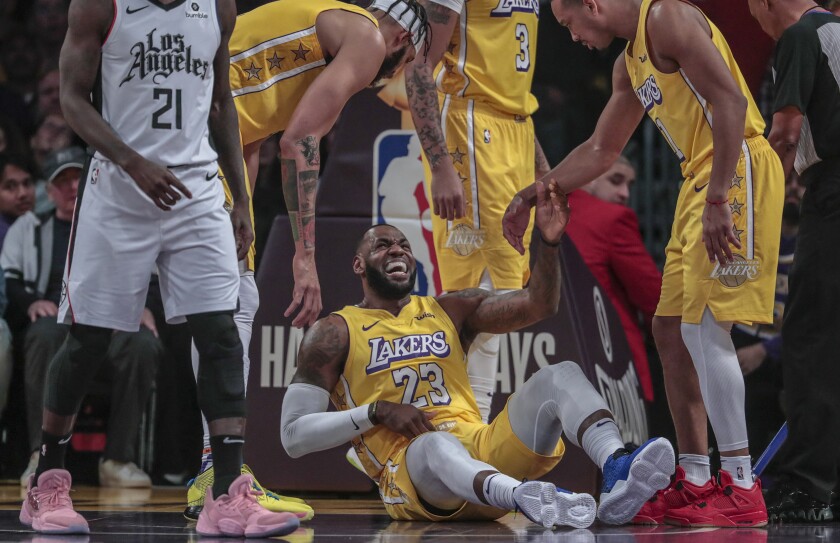 Could LeBron James’ nagging injuries be a warning for Lakers?

With five days off between games, LeBron James was feeling pretty good physically heading into Wednesday night’s game against the Clippers.

Then in the first quarter, Clippers guard Patrick Beverley kneed James in the groin as they collided, leaving the Lakers star crumpled on the court.

“I got kneed in the groin taking a charge from Pat Bev, and it kinda set me right back to where I was five days ago,” James said.

The Lakers have had good luck with injuries so far this season, but might be hitting a rough patch now. Anthony Davis and James have missed games recently, and James is apparently dealing with two injuries.

The Lakers have him listed on the injury report as having a strain in his back’s thoracic muscle. James also said postgame that he has been dealing with a groin injury, which is different from the torn left groin he sustained last year on Christmas. Last year’s injury kept him out for five weeks, and James later said he didn’t feel truly recovered from it until the offseason. His latest groin injury is on the other side of his body, and it’s unclear how it will affect his availability.

James plans to travel with the team to Portland on Friday, according to a person familiar with his plans. But adding to James’ medical consideration is that the Lakers have back-to-back games this weekend. They’ll play in Portland on Saturday and at home against Dallas on Sunday.

Kyle Kuzma had his best scoring output of the season on Wednesday, when he led the team with 25 points. It’s the third time this season Kuzma scored more than 20 points.

“This is what I look like when I’m healthy and I’m confident [with] my body,” Kuzma said. “Like I said I’ve been hurt all year, and this is the best I’ve felt, and my play in the past two games reflects it.”

Kuzma made eight of 17 shots from the field and four of nine three-pointers. He scored 15 points in the first quarter. It was Kuzma’s second game back since missing five because of a sprained ankle. In all he has missed nine games this season with lower left leg injuries.

To close the Lakers’ loss against the Clippers, coach Frank Vogel went to a lineup that included Rajon Rondo, Danny Green, James, Davis and Kuzma.

That lineup shifted a little because of Green’s foul trouble, and the Lakers struggled offensively against a tenacious Clippers team. For the final 4:37 of the game, the Lakers managed just three points. Two came off a jumper by Davis and one came through from a free throw by James.

“Well, we didn’t get enough from any lineup down the stretch because we didn’t win, but the same way I always do,” Vogel said when asked how he chose that group. “We have the same guys that we’re typically gonna close a game with. If we have a need for ballhandling, an extra ballhandler out there, we put Rondo in there. Kuz had been playing well, so we decided to play Kuz. We typically decide to go small late.”

Vogel was asked to explain the benefit of having Rondo in the game late.

“Well if [LeBron] is bringing it up every time against pressure, you got a team that can wear him down,” Vogel said. “So just have a second ballhandler out there, alleviate some of that pressure.”