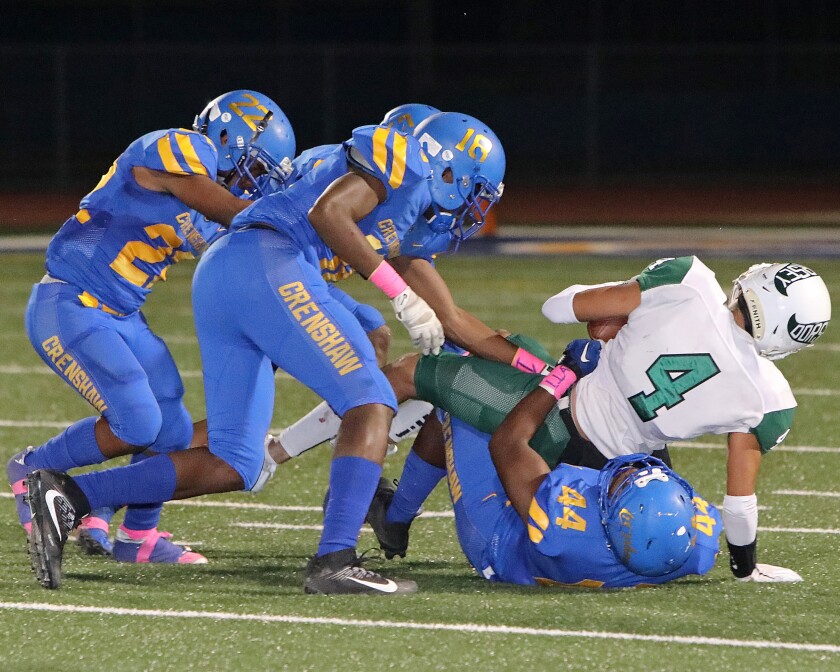 Crenshaw routs Dorsey in a challenging time for rivals

They’re down to a roster of 26 players, most of whom are playing both ways. Practices are more about having walk-throughs and rehabilitating injuries than conditioning and drills. Yet the Crenshaw Cougars have a 6-2 record and have outscored their four Coliseum League opponents 239-27.

Crenshaw players keep finding ways to excel, from quarterback Davontae Haulcy to running back James Logan to linebacker Da’Shawn Hightower. But make no mistake about it, veteran coach Robert Garrett is worried about the situation, particularly the upcoming playoffs.

Crenshaw could be headed to the eight-team City Section Open Division playoffs that’s based on competitive equity, not school enrollment.

“Because of safety matters in football, those things need to be considered,” he said of postseason seeding.

Garrett said his school is surrounded by charter schools that have siphoned athletes from the public schools. Football is no longer the sport that brings people together on Friday nights.

On Friday night, Crenshaw defeated rival Dorsey 51-0, inflicting one of the worst defeats in the rivalry series. Garrett took no satisfaction in the Dons’ troubles. “I’ve never seen Dorsey so down in all my days,” he said.

Here comes Serra: Injuries have plagued Gardena Serra (5-4), but the Cavaliers had all their starters on offense healthy for the first time since the opening week and came away with a 32-25 win over Mission Hills Bishop Alemany.

Serra is headed to the Division 2 playoffs, so beware. The last three seasons in Division 1, the Cavaliers have faced Bellflower St. John Bosco, Corona Centennial and Santa Margarita in first-round playoff games.