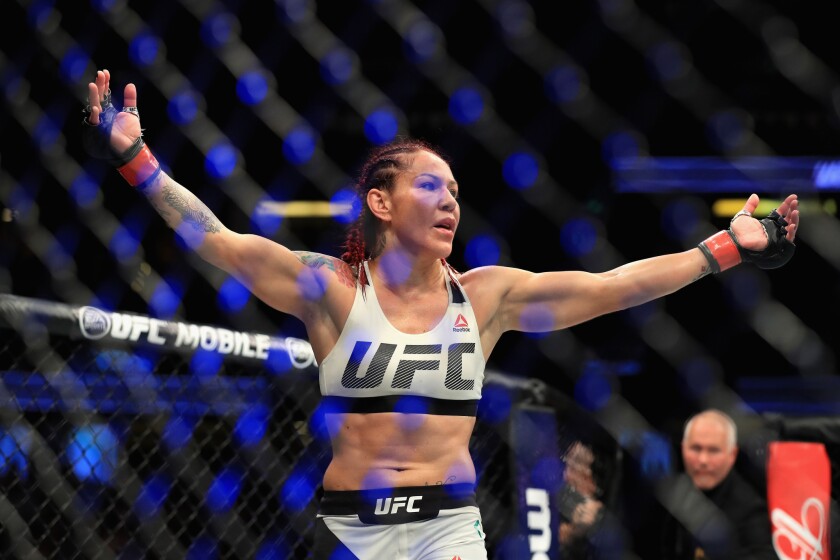 After her unceremonious release from the UFC, Cris Cyborg will make her Bellator debut Saturday at the Forum in Inglewood when she takes on Julia Budd for the fight promotion’s women’s featherweight title.

The 34-year-old Cyborg’s seven-fight UFC career came to an ugly end last year when she butted heads with president Dana White over contract negotiations. The women’s MMA pioneer felt she was being bullied and disrespected by her former boss, going as far as posting an edited video misrepresenting a conversation they had. White finally had enough, and cut her.

In stepped Bellator boss Scott Coker, who has a history of signing stars from the UFC over to his Viacom-owned company. Coker and the Huntington Beach-trained Cyborg (21-2) agreed to a multi-year, multi-fight deal that could make her the highest paid women’s fighter of all time.

“I’m back in the cage with Bellator and in a new chapter of my career,” Cyborg said Thursday from the Paramount Pictures lot. “Scott knows my value. The first important thing for me is respect. The fighters make the events happen. You want a promoter to advance a fighter and not damage your brand.”

Coker said Cyborg, whose real name is Cristiane Justino, will be heavily incentivized in her contract, and that her bonuses will be compounded by a series of victories.

“Cyborg is a big star of the sport. What other fighter can be recognized by one name?” said Coker. “She has brand power and moves the needle. She’s had a great career, and it will only be a continuation of that … I don’t think she was respected over there [at UFC].”

Cyborg is previously a titleholder in the UFC, Strikeforce and Invicta promotions. The 145-pound fighter’s only blemish in the UFC cage came against Amanda Nunes in an all-Brazilian showdown in 2018 when Cyborg was beaten in just 51 seconds. Her only other loss came in her pro debut, and the mystique around her grew immensely when she reeled off 20 consecutive wins, mostly by knockout. In 2011, she tested positive for steroids.

“I’m happy and blessed,” Cyborg said. “I’m going to do my best. Fighting is what I love to do. Every fight I always improve my game. I always learn. I’m getting better in every camp. I feel great.”

Cyborg will have her hands full with the 36-year-old Budd (13-2), a Canadian kickboxer who hasn’t lost since 2011, with her only career defeats coming to Nunes and Ronda Rousey.

“The legacy is nice, but I want to show my fans my faith, and that I never quit no matter what struggles I’ve had in my career. I’ve had a lot of ups and downs,” Cyborg said. “I want to be the champion of people’s hearts, and not just the cage.”

Bellator 238 will stream on DAZN and feature a slew of talent from Southern California.

The co-feature pits Darion Caldwell (14-3), fighting out of Redlands, against Adam Borics (14-0) in the featherweight grand prix quarterfinals. The eventual tournament and title winner will also score a $1-million prize.

Previously touted prospect Aaron Pico (4-3), of Whittier, will look to pick up the pieces after back-to-back losses when he faces Daniel Carey (7-3).