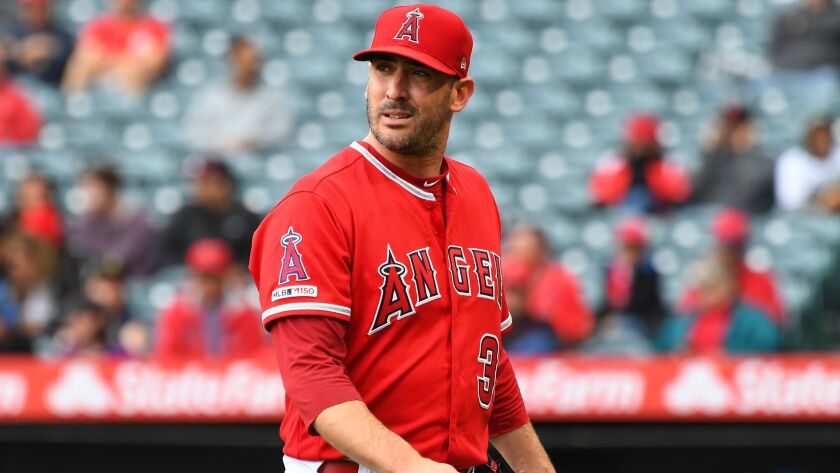 Federal agents have interviewed at least six current and former Angels players as part of their investigation into the drug-related death of pitcher Tyler Skaggs, according to a person with knowledge of the interviews who is not authorized to speak publicly about them.

A representative for pitcher Trevor Cahill confirmed that his client was questioned by U.S. Drug Enforcement Administration agents in Texas in September.

Pitchers Andrew Heaney, Noe Ramirez and Matt Harvey -- who was released by the team July 21 -- also were questioned, according to the person familiar with the investigation. The names of the other two players questioned are not known.

People familiar with the interviews said the players weren’t targeted for any specific reason or suspected of using opiates or implicated in any potential crime.

Federal agents, according to the sources, hoped the players might be able to shed light on whether the use of opiates was prevalent in the clubhouse, if they ever saw players using illegal narcotics on team flights and if they knew how Skaggs procured drugs.

“Trevor was friends with Tyler,” agent John Boggs said, referring to Cahill, “but all this other craziness that happened over the weekend was news to everybody.”

Skaggs, 27, had the opioids fentanyl and oxycodone in his system along with alcohol when he was found dead in his Southlake, Texas, hotel room July 1, the day after the team flew from Orange County to Texas to begin a series against the Rangers.

ESPN reported Saturday that Eric Kay, who has worked for the team in media relations for 24 years, told federal agents that he provided opioids to Skaggs and that he abused drugs with the pitcher for several years. Kay said he was in the Texas hotel room when Skaggs snorted three lines of crushed opioids in front of him.

Kay, 45, is in outpatient treatment for his opioid addiction. His attorney acknowledged in a radio interview Tuesday that Kay opted to cooperate with DEA officials in hopes of a more lenient sentence if he is charged with a crime.

“I felt it was prudent to get ahead of this and to cooperate,” Newport Beach criminal defense attorney Michael Molfetta told AM 570. “In the federal system . . . you get deductions along the sentencing guidelines for early acceptance of responsibility and cooperation, so that’s what the strategy was from a legal perspective.”

Lance Williams, a retired special agent who worked in the Baltimore and Los Angeles DEA offices, said federal agents will scour phone records and text messages between Kay and Skaggs going back several years in an effort to uncover evidence.

Text messages and e-mails between team employees and other family members could also be part of the investigation, Williams said.

“They’re going to pull all the text messages to see if there are common numbers that jibe with the existing investigation, to see if a [team employee] might have texted someone in the front office to say Tyler may have a problem, to see who might have known what,” Williams said. “The lesson from this should be, in this day and age, nothing is going to stay hidden.”

Molfetta said he didn’t believe that Kay or the Angels could be criminally liable for the death, but tens of millions of dollars could be at stake in a potential wrongful-death lawsuit if attorneys can prove a party besides Skaggs might be at least partially responsible for his death.

Kay told federal investigators that he knew of five players who he believed used opiates while they were Angels and that two team officials — Tim Mead, the team’s former vice president of communications, and Tom Taylor, the team’s traveling secretary — were told about Skaggs’ drug use long before his death.

Under Major League Baseball’s Joint Drug Agreement, any team employee who has evidence or reason to believe that a player has used, possessed or distributed any substance prohibited by MLB is obligated to inform the commissioner’s office.

According to ESPN, federal agents learned about the oxycodone transactions between Kay and Skaggs after reviewing text messages between the two.

Molfetta said he has not been told whether Kay is a subject, witness or target of the investigation. Typically, the federal government is more likely to prosecute drug dealers than users.