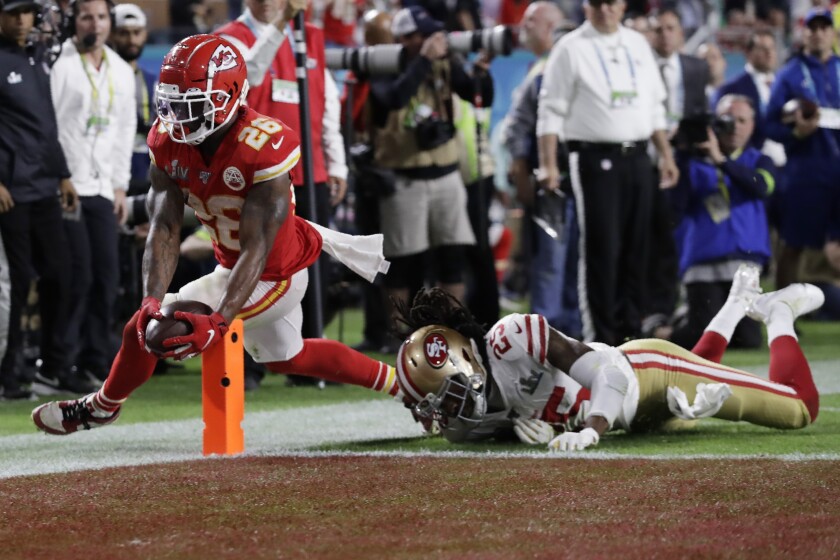 The San Francisco 49ers ran over the Minnesota Vikings and then over the Green Bay Packers to reach Super Bowl LIV.

The effort was eye-catching, the 49ers rushing 89 times for 471 yards, an average of 5.3 yards per attempt.

“They’re a great team,” he said of the 49ers. “I’m not taking anything from them. Their run game … to not hear your name or anything … and just how we do things on the ground, I pay attention.”

Williams responded by gaining a game-high 104 yards in 17 carries Sunday in the Chiefs’ 31-20 victory at Hard Rock Stadium.

He capped the scoring with a 38-yard touchdown run in the final two minutes.

“He runs so angry,” Chiefs safety Tyrann Mathieu said. “He gives our offense this edge. We believe in him a lot. He’s the attitude on offense. We’re just happy he’s continued to perform well.”

Williams also scored the go-ahead touchdown on a five-yard reception with 2:44 left. He tucked the ball just inside the front end-zone pylon before stepping out of bounds.

Williams finished with four catches for 29 yards, bolstering a receiving corps that was led by Tyreek Hill’s nine receptions for 105 yards.

While the 49ers rushed for 141 yards, Kansas City was nearly as good, accumulating 129 yards. The Chiefs ran the ball 29 times compared to 22 for the 49ers.

“Damien Williams … feed that man,” tight end Travis Kelce said. “Super Bowl champ Damien Williams. Two-six is one of the hardest-working guys in the business. Doesn’t complain. He comes into work and puts in the work.”

Williams, 27, who was born in San Diego, was undrafted out of Oklahoma. He spent four years with Miami before joining the Chiefs before the 2018 season.

He finished the regular season with 498 yards in 111 carries, both career highs. He also scored seven total touchdowns, also a career best.

“I got into the league undrafted, had to fight my way in,” Williams said. “And coming here, the organization told me, ‘We like you. But you’re going to have to work to make this team.’

“Hearing that, and just always hearing the doubt and then knowing the type of person I am, yeah, that’s why I bring a lot of attitude to this game.”

He brought the attitude Sunday, in the biggest game of his life and from his opening carry.

“You could tell from his very first run,” fullback Anthony Sherman said. “He wasn’t going to be running out of bounds. He was coming at these guys. That’s what we needed tonight.”

In a game that featured two of the NFL’s best tight ends, Kelce of the Chiefs finished on top.

Kelce caught six passes for 43 yards, including a touchdown in the fourth quarter that pulled the Chiefs to within three points.

George Kittle of the 49ers caught four passes for 36 yards.

Near the end of the first half, quarterback Jimmy Garoppolo completed a long pass to Kittle that might have set up a scoring opportunity. But Kittle was penalized for pass interference.

Finally, Chiefs punter Dustin Colquitt is in the family club. He now has a Super Bowl victory to his name, just like his brother and his father.

His younger brother, Britton, was the punter for the Denver Broncos when they won it all four years ago, and the boys’ father, Craig, won two rings as Pittsburgh’s punter.

“It’s unbelievable,” said Britton, who watched his brother from the stands. “Dad actually took a picture of a screen in pregame that said we’re the only family that had a father and two sons in the Super Bowl. And that’s without both sons winning it. So maybe that will stand for a little while.”

Quarterbacks Peyton and Eli Manning won two Super Bowls each, but their father, Archie, who was also an NFL quarterback, never got to a Super Bowl.

Said Britton, who now punts for Minnesota: “It was the first time I’ve watched a game in 10 years, because unless the Chiefs went to the playoffs or the Super Bowl, I’m not going to go.”

Chiefs receiver Sammy Watkins said this week that he felt hurt when his former Rams teammates advanced to the Super Bowl last season.

Watkins caught five passes for 98 yards against the 49ers. He beat 49ers cornerback Richard Sherman for a 38-yard gain to set up the Chiefs’ go-ahead touchdown.

Watkins will wear a Super Bowl ring after overcoming injuries that plagued him during three seasons with the Buffalo Bills and being traded to the Rams. Watkins has said he learned how to take care of his body and how to be a better teammate during the 2017 season with the Rams.

“I faced a lot of trials and tribulations to get me here,” he said. “I can just say now I am blessed and thankful for my family. I am thankful for everyone who has supported me.”

Vernon Davis, a two-time Pro Bowl tight end with the 49ers, announced his retirement in a commercial with Rob Gronkowski and James Harrison.

In the commercial, Davis and Harrison make up Gronkowski’s “retirement crew.” The commercial is supposed to pay homage to the sitcom “Golden Girls.”

Davis caught a game-winning touchdown against New Orleans in the divisional round in 2011 that was later dubbed “The Catch III.” He finished his career with 583 catches for 7,562 yards and 63 touchdowns. He was also a member of the 2015 Denver Broncos that won Super Bowl 50.

Wire services contributed to this report.