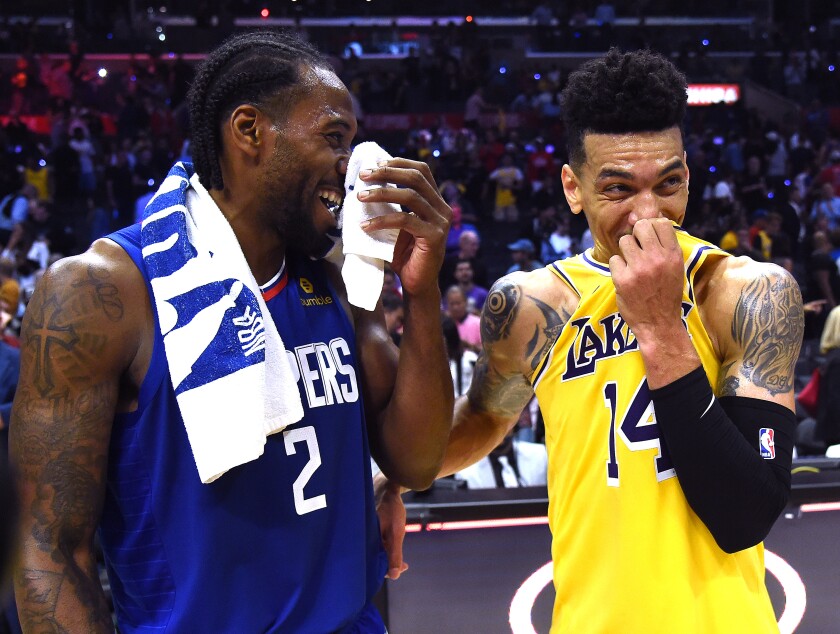 Danny Green gives Lakers a glimpse of his shooting prowess

Danny Green came to the Lakers to compete for another championship, and the Lakers brought him into the fold in part to solve a very specific problem — their shooting.

During Tuesday’s season-opening loss to the Clippers, Green gave the Lakers a glimpse of what he could do.

Green finished the game with a team-high 28 points and seven rebounds, after scoring only three points in the first half. He started for the Lakers alongside Anthony Davis, LeBron James, JaVale McGee and Avery Bradley.

“Teammates did a great job of finding me,” Green said. “Got into a nice little rhythm. Made a couple lucky ones but that’s not my concern. Offensive end of the floor, it’s the defense is our end. My job is to get us going, get us talking, communicating and making sure we’re on the same page. Did my job decently on the defensive end but I didn’t play the way I should have ... we gotta do a better job of containing Lou [Williams] and Kawhi [Leonard].”

Playing shorthanded, the Lakers needed it. They were without wing Kyle Kuzma, who is recovering from a stress reaction in his left ankle, and point guard Rajon Rondo, who was out with a sore calf. That meant a significant dropoff for the Lakers when James and Davis left the game and even more when the other starters took their rest.

The Lakers had 19 points off their bench, while the Clippers got 60 points from their reserves. On the other hand, the Clippers had only one starter score in double figures — Leonard, who had 30 points. The Lakers had three — Davis scored 25 with 10 rebounds and James scored 18 with eight assists and nine rebounds.

From Green, though, the Lakers got their most efficient shooting. He made more three-pointers than the rest of his team combined, making seven of nine attempts.

“With the talent around him he’s going to get a lot of open looks but he was also very aggressive in his actions,” Lakers coach Frank Vogel said. “We’re not just using him to spot up in the corner. We’re bringing him off screens. He was very aggressive in transition and using screens like we talked about. And he had a terrific night.”

With the Lakers trailing by double digits early in the third quarter, Green scored 18 points during that period. That included five three-pointers and an and-one play, which helped the Lakers tie the score at 85 heading into the fourth quarter.

With the Lakers trailing by 11 late in the fourth, Green grabbed the ball away from Montrezl Harrell and turned his steal into another layup.

The Lakers went on a 15-3 run to close the third quarter and tie the game at 85 heading into the fourth.

“I was just trying to play basketball,” Green said. “Trying to win the game. It wasn’t like it was creating a spark, just get back into the game, get into a rhythm. We were very much in distance of still being in the game or winning the game.”

Green has been getting comfortable with the Lakers throughout the preseason. He’s not used to some of the open looks he’s been getting and knows how rare they can be.

Green knew Tuesday’s game would have its odd aspects. It was his first time playing against his old teammate Leonard, defending him at times.

“I’ve done it before,” Green said. “We had a couple practices where I had to guard him. A little strange doing it live in front of 20,000 fans. It was a lot of fun. Little weird at first. We had some good battles in practice and today was a weird one.”

He and Leonard have in common a championship they won together in Toronto last season and one in San Antonio in 2014. That, too, is part of the benefit Green gives to the Lakers.