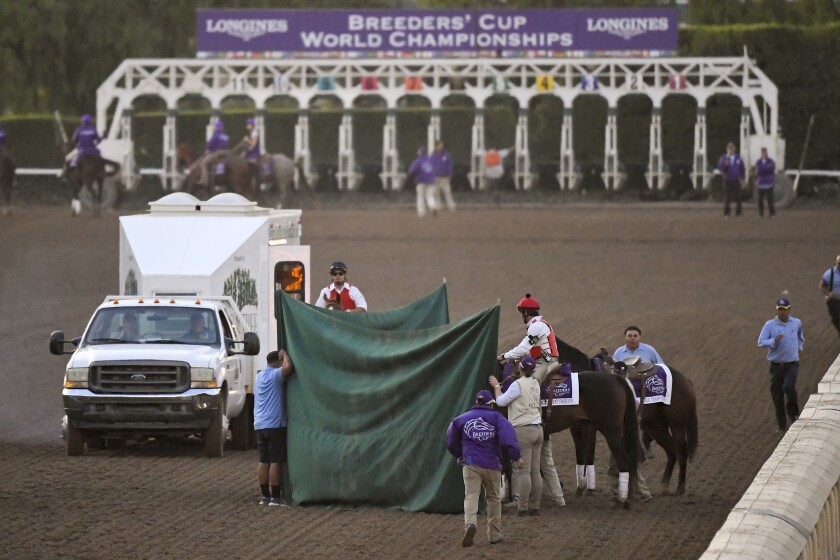 Death of Mongolian Groom in Breeders’ Cup could have been prevented

The death of Mongolian Groom in the $6-million Breeders’ Cup Classic at Santa Anita on Nov. 2 could have been prevented, according to a report released Wednesday by the Breeders’ Cup.

The report said that 253 horses were evaluated several times and that 24 horses were scratched either in the Breeders’ Cup races or on the undercard of the two-day event out of concern that they weren’t in safe racing condition.

“The examining veterinarians made the right call on 252 horses,” the report said. “That is a 99.6% accuracy rate. The decision was wrong on only one horse: Mongolian Groom.”

The 25-page report was headed by Dr. Larry Bramlage, a nationally known and respected veterinarian at the Rood and Riddle Equine Hospital in Lexington, Ky.

The 4-year-old gelding was competitive during most of the race, sitting just off the lead. When he entered the stretch, jockey Abel Cedillo pulled him up. The horse was vanned off and euthanized. For horsemen, the Breeders’ Cup Classic is the most important race of the year and can lead to horse-of-the-year honors. The Kentucky Derby is the biggest race for the general public, but is restricted to 3-year-olds.

Mongolian Groom was not scheduled to be in the Classic until he pulled an upset in the Awesome Again Stakes at Santa Anita.

He was on an informal “watch list” for added observation. Veterinarian comments were entered on four other unidentified horses in the Classic.

“These were the best horses from the racing season in 2019,” the report said. “They had earned some soreness and it is a tough assessment as to whether a horse is actually lame or just had routine soreness from a long season.”

No veterinarians were named in the investigation, which also exonerated the Santa Anita track surface as playing any role in Mongolian Groom’s death. It was also said that pre- and post-race toxicology showed no prohibitive substances or medication overages.

According to the report, part of the problem was that Mongolian Groom had preexisting conditions in both hind legs, which makes it more difficult to diagnose because the horse isn’t favoring one of its legs.

“Many important lesions such as those in Mongolian Groom’s hind cannon bones are not easy to find,” according to the report. “They can be missed if exactly the right radiograph projection is not acquired.”

Santa Anita recently acquired a PET (Positron Emission Tomography) machine for $500,000 that will allow scans on horses while they are standing. Still, the report, without citing Santa Anita specifically, did not think that alone was the answer.

“The new PET images are also promising, but without combining them with something like a CAT scan localization of lesions is still not perfected,” the report said.

A high field MRI exam is a very effective tool but needs to be used with general anesthesia making it impractical for routine screening.

The report concluded that “there were opportunities to remove Mongolian Groom from competition that were missed due to time constraints or process deficiencies that could be made more prominent.”

-- Identify horses that have a history of problems before they arrive at the track and make regulatory veterinarians aware of their presence.

-- Concentrate the examinations in the hands of fewer veterinarians allowing for more consistency throughout the series of examinations.

-- Concentrate on-track observations more to the trot, where problems can be more easily spotted, rather than walking, galloping or breezing.

-- Create an area in the barn area where “extra scrutiny” horses can be observed jogging in a circle in both directions. This is even more effective than the trot when seeing problems.

-- Look at all video footage available for “extra scrutiny” horses.

The added attention for horse safety was in reaction to 37 deaths either racing or training at Santa Anita during last year’s racing season. Mongolian Groom was No. 37. This racing season, which started Dec. 26, has had two deaths, one training and one racing. At this point last year, there were five.

The Breeders’ Cup report was in contrast to an investigation by the Los Angeles District Attorney’s office, which found no factors responsible for the deaths. It offered up several recommendations, almost all of which had been previously discussed or proposed by the California Horse Racing Board.

The CHRB will also be issuing a report, starting with a summary by the end of the month and individual necropsy reports to follow sometime next month. It’s expected to have similar conclusions that most breakdowns occur from preexisting conditions, many of which there is not equipment to detect.