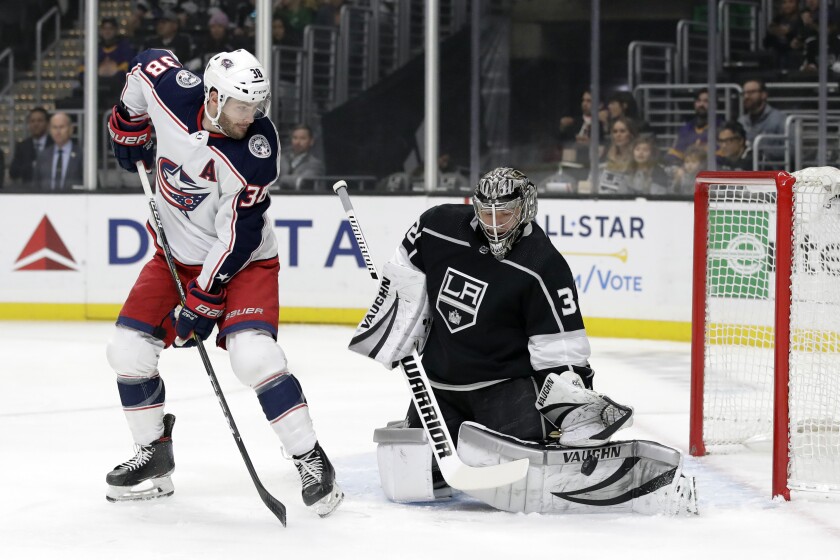 Anze Kopitar looked around, seemingly confused. Ben Hutton fished the puck out of his own net. Jonathan Quick slowly climbed back to his feet.

The Kings were barely past the midway point of their 4-2 loss to the Columbus Blue Jackets at Staples Center on Monday, yet it was already apparent that another long night was setting in.

Monday’s game started brightly for the Kings. They led in shots, and for long stretches felt like they were controlling play. They scored on their second shift — a close-range finish from Alex Iafallo, who extended his point streak to seven games — and mounted a furious late comeback effort after a goal by Sean Walker in the third period trimmed their deficit to one.

In between, they didn’t exactly play poorly, either. But two second-period defensive-zone breakdowns in a matter of minutes cost them.

The first came at the 6:53 mark, when Blue Jackets forward Nathan Gerbe found open space in the high slot and slapped a one-timer past a partially screened Quick. Less than four minutes later, Blue Jackets defenseman Scott Harrington snuck toward the net unchecked and buried a backdoor pass that left Kopitar, Hutton, Quick and the rest of the Kings in a confused state.

An early third-period goal from Blue Jackets forward Kevin Stenlund ultimately put the game out of reach, ensuring the Kings will do no better than .500 on a four-game homestand that offered an opportunity for a midseason winning streak. Instead, the Kings skated off home ice wondering how they let another winnable game slip away.

Early in the season, inconsistent goaltending and lapses in the neutral zone sunk the Kings to a 4-9-0 start. Later, sorrowful special teams — the power-play and penalty kill units statistically have been among the league’s worst all season — and an 11-game road losing streak kept the team stuck near the bottom of the standings. Lately, a lack of scoring and lapses on defensive-zone faceoffs had been the group’s biggest problems.

On Monday, there were new problems, putting coach Todd McLellan through another round of coaching whack-a-mole. Every time the first-year bench boss seems to address one issue, a new one pops up.

McLellan had hoped the returns of veterans Dustin Brown (who missed the past four games with pneumonia), Trevor Lewis (out since Dec. 23 with a lower-body injury) and Derek Forbort (who made his long-awaited season debut after an offseason back injury) would bring stability to a team that had won only two of its previous seven and was coming off one of its most listless losses of the season.

“Brownie’s an abrasive player when he’s playing well, and he has the finish,” McLellan said. “Lewie’s a brain — I call him a brain. He can maneuver around the rink and play different situations, he’s a good penalty killer. And Forby, obviously, with his penalty kill and his presence in and around the blue paint. That’s what you miss with those three players.”

But their presence mattered little against the Blue Jackets, who added an empty-netter in the final minute to seal the win.