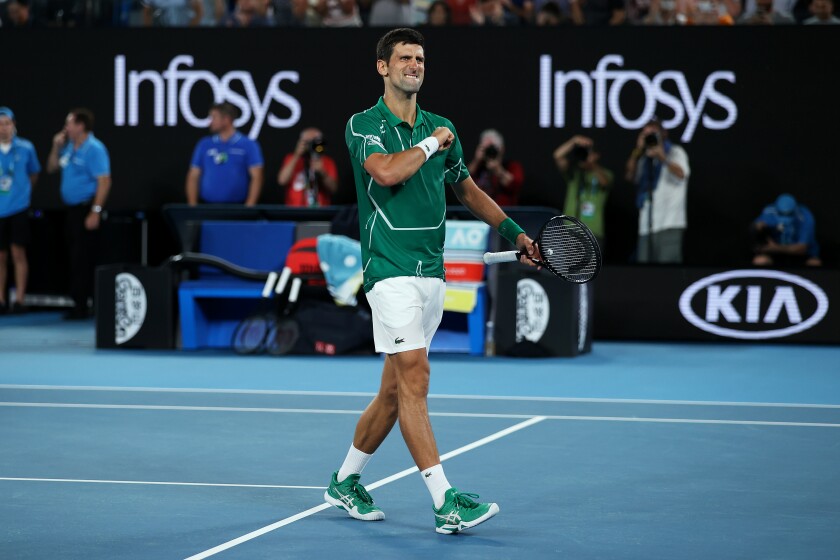 Novak Djokovic was wondering, right along with everyone else, what sort of shape Roger Federer would be in for their Australian Open semifinal.

So Djokovic was watching closely.

At age 38, despite dealing with a painful groin muscle and coming off a draining five-setter, Federer came out just fine, it seemed, and soon was up 4-1 and love-40, holding a trio of break chances as Djokovic served.

Casting aside a bit of a poor start during the rivals’ 50th meeting, Djokovic stretched his Grand Slam winning streak against Federer to six in a row with a 7-6 (1), 6-4, 6-3 victory Thursday night that earned the defending champion a record eighth trip to the final at Melbourne Park.

“Well, it could have definitely gone a different way, if he used those break points. He started off really well. I was pretty nervous at the beginning,” said Djokovic, who now leads their head-to-head series 27-23, including 11-6 at majors.

“I just want to say respect to Roger for coming out tonight. He was obviously hurt,” Djokovic said. “Wasn’t at his best.”

The No. 2-seeded Djokovic will try to collect a record-extending eighth Australian Open title in Sunday’s final against No. 5 Dominic Thiem or No. 7 Alexander Zverev.

Djokovic also can claim a 17th major trophy overall to move closer to Federer’s record of 20.

Clearly, for Djokovic vs. Federer, everything hinged on the first hour or so.

“I managed to dig my way back,” Djokovic said. “It was very important to win that first set. Mentally relaxed after that. Could swing through the ball a bit more.”

After being a point from 5-1, Federer still got within two points of taking that set on five occasions.

But he could not get the deal done.

Djokovic put up too much resistance, much like during their epic Wimbledon final last July, when he thwarted two championship points for Federer and wound up winning in a fifth-set tiebreaker.

This semifinal began on a muggy, sweltering evening, with the temperature in the high 90s and no breeze to offer respite.

Almost from the moment his wild quarterfinal ended Tuesday after he’d saved seven match points and eked past Tennys Sandgren in five sets, speculation swirled about how well Federer would recover. Might the muscle issue force him to pull out of the tournament? Did he practice Wednesday? If not, why not?

As it happens, Federer showed up, of course. And gave what he could until the end.

He’s never handed an opponent a walkover across more than 400 Grand Slam matches, never retired from any of his more than 1,500 career tour-level matches.

Indeed, Federer appeared to be managing just fine at the outset.

The proceedings began with a jolt of a 14-point game as a fugue of “Let’s go, Roger!” and “No-le! No-le!” provided the soundtrack, prompting chair umpire Nico Helwerth to passively aggressively admonish spectators: “Please. Thank you.”

There was an exchange of 17 strokes. Another of 15. There were two break points for Djokovic, nullified with the help of formidable serves. Of most consequence, likely, to anyone attempting to gauge Federer’s fitness — a group that included not only Djokovic, but also fans and media members, not to mention Federer himself — was how well he served.

If his three aces and six total winners didn’t provide a suitable answer, maybe his break in the next game to lead 2-0 did.

Soon it was nearly 5-1 in Federer’s favor. Close doesn’t count, though.

After Djokovic got out of that love-40 hole to hold, he found himself in a similar spot. Federer was up 5-2 and love-30 on Djokovic’s serve — two points from owning the set — yet got tripped up again.

Djokovic picked up 10 consecutive points to not only hold there but also break at love in the following game as Federer, one of the most effective servers ever, served for the set. At love! Imagine that.

In the eventual tiebreaker, Djokovic did what Djokovic does: No mistakes and four pure winners, including a down-the-line backhand return to end it.

At the break, Federer took a medical timeout and went off court with a trainer, like he did against Sandgren, while Djokovic stayed on the sideline while he, too, got checked out.

When play resumed, Federer did not look as spry or confident as in the first set. He tried shortcuts such as pushing forward on returns or less-than-ideal drop shots. He couldn’t generate so much as one break chance.

Djokovic took the set with a final-game break and the last two points were spectacular.

First, he followed up a stinging return by heading far to his left for a sprinting, sliding, stretching cross-court backhand passing shot; he probably shouldn’t even have put his racket on the ball, let alone managed to win the point.

Then he reacted to a short shot by Federer by running all-out to flip a cross-court forehand pass that made it two sets to none. Djokovic threw an uppercut and bellowed, “Come on!”

They played for another half-hour or so but all that was left to decide was the score, not who would win.