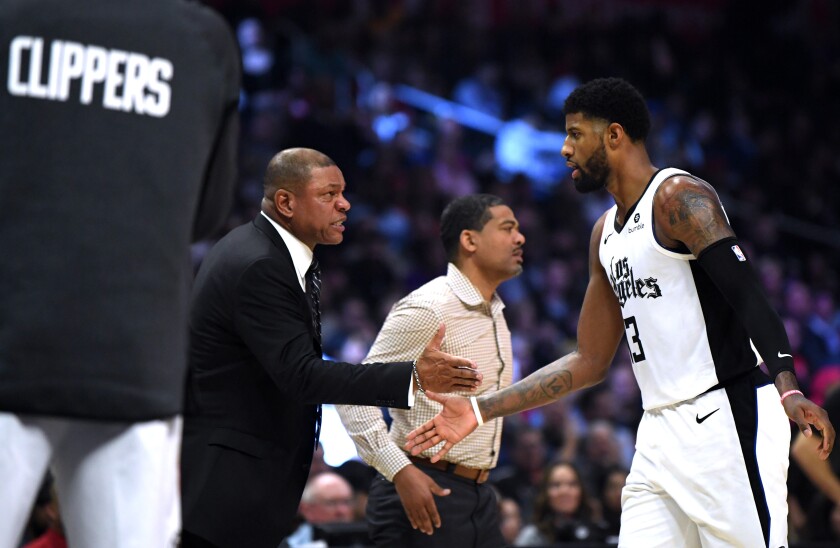 Doc Rivers makes sure the Clippers know their roles, and it pays off

On a drizzly day in Canada, hours before their final preseason game Oct. 22, Clippers players and coaches gathered in downtown Vancouver’s Shangri-La Hotel and waited for Doc Rivers to speak.

The coach went around the room, one player at a time, asking a question: What is your role?

Rivers then added his own definition of each player’s role.

“Guys all say the right thing,” Rivers said, “but then they have to hear mine too.”

By adding Kawhi Leonard and Paul George to the team this summer, the Clippers instantly assumed the role of championship contenders, and in the weeks and months that followed, teammates spent ample time getting to know one another, whether in Miami’s clubs or on Honolulu’s courts. And yet, several later called their meeting in Vancouver hotel’s conference room the preseason’s most important get-together.

“This group came together to win, so we got that out early,” George said. “We defined who we are as individuals, we saw the goal of who we want to be as a group, and we hashed it to start the season.

“At this point you got a veteran group with a Hall of Fame coach. We know what time it is and we know what we got to do.”

Out-in-the-open meetings are staples of Rivers’ coaching, but players who were around last season couldn’t recall one. Perhaps because, as center Johnathan Motley and guard Jerome Robinson theorized, a roster devoid of All-Stars needed everyone to do a little of everything to earn the Western Conference’s eighth and final playoff berth.

In contrast, the options and star power afforded by the current roster required a different approach, a division of labor the Clippers hope will be the blueprint for a deep postseason run. Guard Derrick Walton Jr. left the meeting with “clarity.”

“Winning trumps everything,” Walton said. “When you decide you want to win, a lot of stuff goes into that, with sacrifices and overall commitment. Once you decide that, there’s no turning back.”

During Patrick Patterson’s 10 years in the league, the forward often met with coaches individually to learn his role. One even placed in his locker a card on which his job was literally spelled out. But if such meetings are routine, what resonated was hearing roles talked through out loud.

“If someone messes up and if someone isn’t doing their role, well, each person knows what each role is,” Patterson said.

Nearing the regular season’s midway point, injuries and preventative rest have left Los Angeles rarely at full strength, leading Clippers to repeatedly refer to themselves as a “work in progress.” Guard Patrick Beverley called the lack of continuity “definitely a challenge.”

After a 28-point Clippers loss to Milwaukee in December, Leonard noted that “some of us don’t know the plays coming down, and it’s hard to get in our sets.” And after giving up 272 combined points to Memphis and New York last weekend, the team pinned many breakdowns on miscommunication.

Players admitted that there can be a natural temptation to fill the rotation’s voids by overcompensating. Staying within roles “never holds up 100% with any team,” Rivers said. “Some guys can’t do their role, and some guys move past their role, which is the guy you like.”

The Clippers’ role players “have done a pretty damn good job” sticking to the plan, Rivers said. He also acknowledged some roles — such as using secondary ballhandlers to initiate most of the offense because of the void at point guard — had put players in a difficult position.

“There’s guys that I’ve been unfair to, putting him at the point guard,” said Rivers, pointing to shooting guard Landry Shamet. “That’s tough for him. But right now we have so many guys out, you have to put him there and hope he can figure it out.”

Shamet entered this season expecting his role to change from primarily a spot-up shooter to a facilitator, even before the Clippers traded point guard Shai Gilgeous-Alexander as part of the package that landed George in a trade.

Short-handed lineups won’t be the only challenge faced by the rotation. When the Clippers return to full strength, minutes will be doled out differently. That can lead to uncomfortable conversations between a coach and players whose roles shrink as the postseason nears.

Rivers and multiple Clippers said they do not foresee problems ahead, citing the frank talk already shared in Vancouver.

“Sometimes really good teams, when they have the options we have, everybody wants to be ‘the guy,’” Shamet said. “From day one, I think we’ve all understood that and been in a good place about it. It makes things a whole lot easier.”

Update: This is the first of three meetings between Denver and the Clippers is a one-game trip for the Clippers. The Nuggets will be playing their second game in as many days after hosting Cleveland on Saturday. Denver owns the league’s top offensive rating in January, scoring 122.2 points per 100 possessions, and also its worst defensive rating (allowing 120.8).