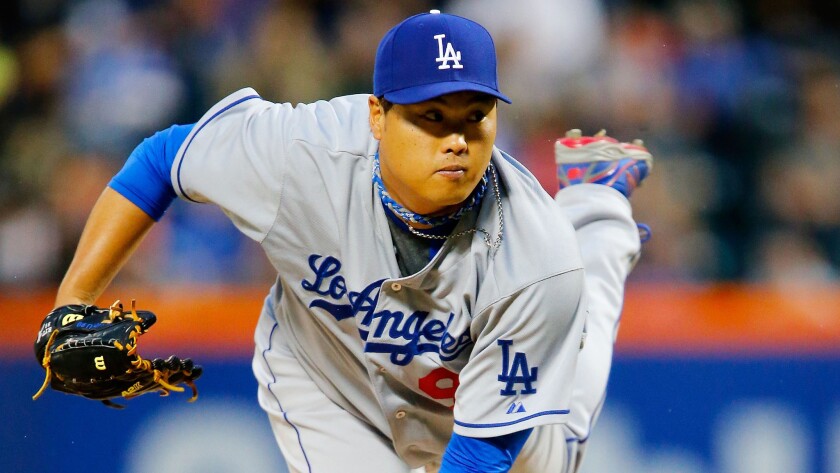 Clayton Kershaw, the last Dodger to claim the award in 2014, finished eighth in the voting. Dodgers right-hander Walker Buehler was ninth.

DeGrom took 29 of the 30 first-place votes — the other one went to Ryu. He is the 20th pitcher in history to win the award twice and the seventh National League pitcher to win it in consecutive years. The 31-year-old right-hander led the National League with 255 strikeouts in 204 innings. He finished second in the majors in ERA (2.43) to Ryu (2.32) and second in the NL to Scherzer in fielding independent pitching (2.67).

Ryu, 32, was the newcomer among the three finalists in perhaps his final season as a Dodger. He issued a league-low 1.18 walks per nine innings and logged 187 2/3 innings between 29 starts during the regular season and one in the playoffs. It was his best season since coming from South Korea to begin his major league career in 2013.

He peaked in 18 starts between April 26 and Aug. 11, compiling a 1.18 ERA to become the Cy Young favorite until his candidacy plunged over his next four outings. He started the All-Star Game for the National League along the way. But he had a 9.95 ERA his next four games, prompting the Dodgers shut him down for 10 days. The respite put Ryu back on track; he gave up three runs across 21 innings in his three final regular-season starts.

Ryu surrendered two runs in five innings in the Dodgers’ win in Game 3 of the NL Division Series against the Nationals. It could’ve been his final appearance in a Dodgers uniform. Last year, he took a chance on himself by taking the Dodgers’ one-year, $17.9-million qualifying offer over entering free agency. He had posted a 1.97 ERA over 15 starts in 2018, but missed three months with a groin injury. Durability questions remained.

The decision paid off, however. Ryu enters the open market this offseason as one of the top pitchers available. He will attract significant interest — maybe enough to drive his price beyond the Dodgers’ comfort zone. But Ryu has enjoyed playing in Los Angeles, perhaps giving the Dodgers an edge in his pursuit and a chance to retain him at a discount. The Dodgers were expected to meet with Scott Boras, Ryu’s agent, Wednesday night.

“There are always discussions,” Dodgers president of baseball operations Andrew Friedman said Wednesday at the general managers meetings. “I think with all talented players available in the marketplace, it’s our job to have conversations. So I think it’s safe to assume there are conversations [regarding Ryu] — and just the amount of respect we have for him.”

Rich Hill is another member of the Dodgers’ 2019 starting rotation that has hit free agency, leaving Los Angeles with two spots to fill. Friedman reiterated Wednesday that the team plans on having Julio Urias in the rotation next season. Urias pitched out of the bullpen for most of 2019 in a hybrid role the Dodgers created to ensure he did not suffer any setbacks two years removed from major shoulder surgery.

Urias, as it stands, would join Buehler, Kershaw, and Kenta Maeda in the rotation. Friedman said Ross Stripling, who bounced between the rotation and bullpen in 2019, would have a chance to compete for a rotation spot. Prospects Dustin May and Tony Gonsolin are also in the mix.

The plans are subject to change depending on how the Dodgers’ offseason unfolds. They could bring back Ryu or Hill. They could re-sign both or neither. They could drop huge money on Cole or Stephen Strasburg. They could sign a free-agent pitcher from the next tier such as Zack Wheeler or Jake Odorizzi or acquire a starter via trade.

Friedman insisted the Dodgers will not seek to plug specific holes, but bolstering the rotation is likely. Whether they do it by retaining one of their own coming off a season worthy of Cy Young consideration remains to be seen.

Last month, Friedman said he would sign his contract to remain as the Dodgers’ president of baseball operations “in a couple of days.” He explained finishing the deal was a mere formality and he was definitely returning.

But it has taken longer than that. Friedman arrived at the general managers meetings this week still without a contract. He maintained nothing has changed and he isn’t going anywhere. But he wouldn’t elaborate on the reason for the long delay.

“There’s an understanding,” Friedman said. “We just haven’t gotten there yet because of everything else going on.”

Friedman’s five-year contract expired at the end of the season. The Dodgers have won five straight National League West titles and advanced to two World Series under his watch.