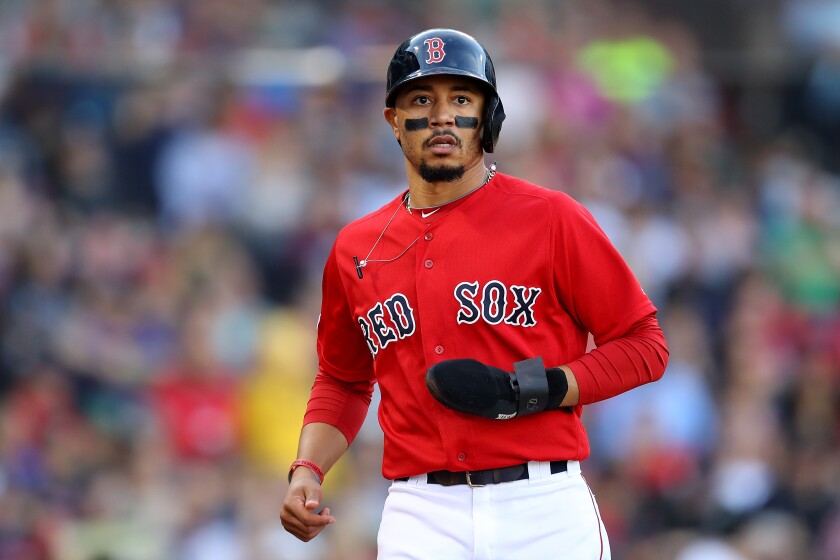 At the winter meetings in December, Dodgers manager Dave Roberts said he expected more roster turnover this offseason than in any of his previous years at the helm. It was a low bar and the Dodgers still have not surpassed it. With two weeks remaining until pitchers and catchers report for spring training, the Dodgers’ offseason has gone quieter than even they anticipated.

The club missed out on the top free agent targets, starting with Gerrit Cole and ending with Josh Donaldson, and have signed to one-year contracts with three pitchers coming off poor seasons or significant injuries: Blake Treinen, Alex Wood and Jimmy Nelson. They are low-risk, high-reward transactions. None are guaranteed to move the needle.

But the Dodgers might not be done. The club remains interested in trading for an All-Star player and have been engaged in trade talks with the Boston Red Sox about acquiring outfielder Mookie Betts, according to a person with knowledge of the situation.

Also, Chicago Cubs third baseman Kris Bryant on Wednesday lost his service-time grievance battle with Major League Baseball and now will be under team control through 2021. Trade talks for Bryant were in a holding pattern before the decision, which makes the slugger more appealing to teams like the Dodgers but likely will mean the Cubs’ asking price would be steep. Bryant will make $18.6 million this season and now will be arbitration-eligible instead of a free agent in 2021.

Trade talks for Cleveland Indians shortstop Francisco Lindor and starting pitcher Mike Clevinger reportedly have cooled in recent weeks, although the possibility remains that the Dodgers could acquire one or both of them — perhaps in a three-team deal.

Speaking at the team’s FanFest last weekend, Dodgers president of baseball operations Andrew Friedman was asked if he expected to continue dialogue on the trade market.

“I definitely see it,” Friedman said. “For sure.”

The Dodgers don’t need to acquire premier talent to contend. They are already favorites to win the National League West title for the eighth season in a row and advance to the World Series for the third time in four years. Vegas set their over-under win total at 98.5 after they won a franchise-record 106 games last season. They could stand pat, wait until the July trade deadline to try to patch holes, and compete for a championship.

But adding Betts, 27, would give them a supreme talent for October, when roster depth matters less and stars shine. He is one of the few players in baseball who can come close to competing with the Angels’ Mike Trout for the best-player-in-the-world title.

So why would Boston trade Betts in his prime? The Red Sox are reportedly intent on reducing payroll to move under the competitive balance tax threshold after paying a luxury tax the last two seasons. Moving Betts is an option for two reasons: He will make $27 million this season after the two sides agreed on a deal to avoid arbitration and he has indicated he is not willing to sign a long-term extension with the club before entering free agency next winter.

Betts’ impending free agency adds a layer to the trade discussions. The Dodgers would prefer having a window to discuss a long-term contract with Betts before executing a trade. The Red Sox don’t have to grant them one, but it would surely help them if Betts informs the Dodgers he is willing to sign a deal for beyond this season.

That scenario would give Boston the leverage to ask for a better package in return from the Dodgers, who have avoided trading top prospects during Friedman’s tenure. Los Angeles has refused to trade its two top prospects — infielder Gavin Lux and right-handed pitcher Dustin May — but boasts a deep farm system with seven prospects in Baseball America’s top 100 to entice Boston. In addition to young assets, the Dodgers could pluck from their depth at the major league level to improve a package.

The Dodgers could also take left-handed starter David Price from the Red Sox for further salary relief. Price, 34, is due $96 million over the next three seasons. Boston could pay a portion of the salary and still save substantial money.

Price has battled injuries since signing a seven-year, $217-million contract before the 2016 season. He’s averaged 147 innings and 25 starts while compiling a 3.84 earned-run average the last four years for Boston.

There’s familiarity between the two sides. Friedman worked in the Tampa Bay Rays’ organization when the team drafted Price in the first round of the 2004 draft. Six years later, Friedman, knowing the Rays couldn’t afford to re-sign Price once he hit free agency, traded him to the Detroit Tigers. Friedman also hired Red Sox head of baseball operations Chaim Bloom to work for the Rays after Bloom graduated from Yale in 2004.