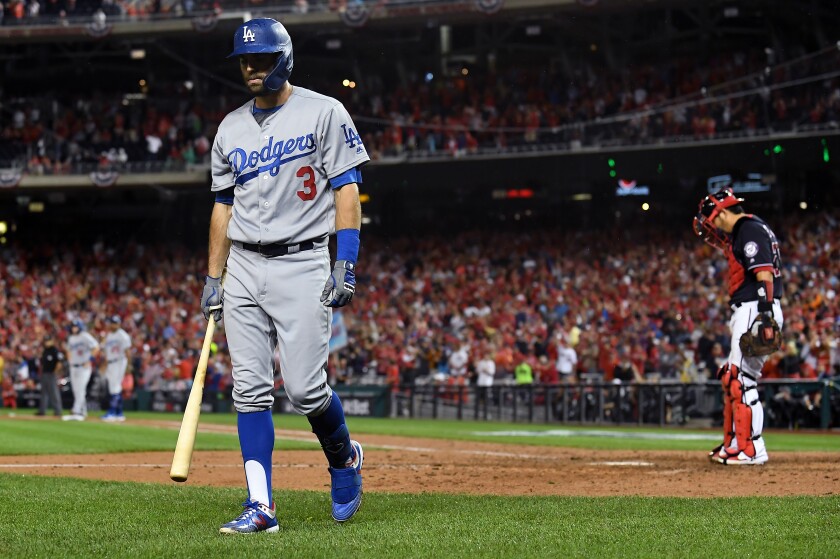 One of the Dodgers’ priorities last offseason, following another World Series disappointment, was to improve their approach to hitting. Robert Van Scoyoc, a new-wave instructor whose playing career ended in junior college, was hired to replace Turner Ward, a former major league player, as hitting coach to head the department with hitting strategist Brant Brown. Their objective was to better prepare hitters for the postseason when elite pitching would undoubtedly stand between them and winning a championship.

They implemented ideas with traditional and data-driven methods. The results during the regular season were promising. Throughout the summer, players spoke glowingly about the execution. The Dodgers set a National League record for home runs and scored the most runs in the NL while striking out less frequently and producing in clutch situations more often than in recent years. They were confident they were prepared to counter premier pitching and score more runs in the playoffs.

In the end, they didn’t. The Dodgers confronted the Washington Nationals’ stout starting rotation and did not score enough to avoid losing in five games in the NL Championship Series. While Clayton Kershaw’s latest collapse and Dave Roberts’ latest round of questionable bullpen usage in Game 5 attracted the scorn, the offense failed to provide much of a safety net.

The Dodgers scored 22 runs in the five games against the Nationals. Ten were produced in Game 3, which included a seven-run sixth inning. They scored two runs in Game 2 and one run in Game 4. They didn’t score over the final eight innings of Game 5 after getting three runs against Stephen Strasburg in the first two innings.

“Obviously, we were facing great pitching,” Dodgers president of baseball operations Andrew Friedman said this week. “I don’t think there’s enough credit given to how difficult hitting in the major leagues is, especially against the elite pitching.

“But it definitely fell short of my hopes in terms of how as a team the offense would kind of adapt and tackle the difficulties of October pitching. And I think hopefully it’s another one of those areas that we can focus on this offseason and continue to refine and make better as we go into next year.”

The Dodgers’ optimism during the regular season stemmed largely from making more contact. In 2018, their 22.6% strikeout rate ranked 17th in the majors. In 2019, the Dodgers ranked in the top five for most of the season and finished ninth at 21.6%. Their contact rate on pitches in the strike zone also improved from 28th to 10th. The formula was promising.

But the Dodgers reverted to their previous October struggles once the games mattered again. Of the 135 outs they made in the five games against the Nationals, 64 were strikeouts. Cody Bellinger, the likely National League MVP, went four for 19 with seven strikeouts. Corey Seager went three for 20 with eight strikeouts. A.J. Pollock went 0 for 13 with 11 strikeouts, losing his starting spot along the way. Justin Turner and Max Muncy were the only players with double-digit plate appearances to accrue fewer than five strikeouts.

The Nationals’ starting rotation — consisting of Strasburg, Max Scherzer, Patrick Corbin and Anibal Sanchez — is undoubtedly elite, but the Dodgers were going to have to topple that level of pitching at some point to win the World Series. They knew it, and Friedman believes they didn’t make the proper adjustments.

“I think it’s on all of us,” Friedman said. “But I think human nature is to want to be the hero, which I totally understand. But it’s that in October, I think pitchers feed off that. And they throw less fastballs, they throw less pitches in the zone and I think it’s just that awareness and that second-level thinking and team-wide approach that I think put us in a better position.

“It’s a hard thing to counteract because, again, what they’re doing is the most difficult thing to do in all of sports in my opinion. You have that human instinct, which is, ‘I want to be the hero.’ So it’s a difficult thing to appreciate. Each time before that next pitch, you’re like ‘Here is where he’s going to throw the fastball. This is the one that’s going to be in the zone.’ And in October, it’s not nearly as often as it is in the regular season.”

The Dodgers’ offensive struggles would have been disregarded if Will Smith’s fly ball to right field in the ninth inning of Game 5 went over the wall. Smith believed he had a hit a walk-off home run. He leaped in the air, anticipating the ball would carry as it did for him and countless others during the regular season when balls were flying into the stands every night. Friedman, watching from his suite, thought so too.

But the ball died at the warning track for the inning’s second out. Friedman declined to comment when asked if he believed MLB changed the composition of the baseball for the postseason and whether that altered the Dodgers’ fortunes. But he thought Smith’s ball was a home run.

It had been running in his head in the few days since. But it wasn’t a home run. And, in the end, the Dodgers didn’t score enough.