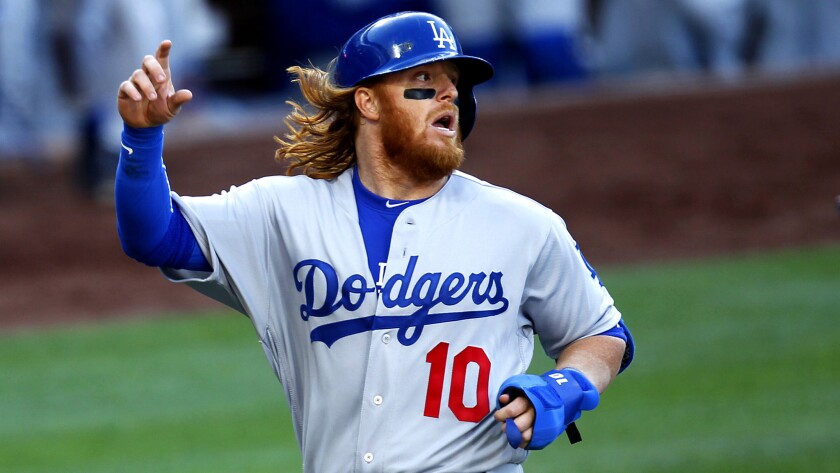 Dodgers Dugout: Baseball is back ... sort of

Hi, and welcome to another edition of Dodgers Dugout. My name is Houston Mitchell and we’re about a month away from the Dodgers returning for real games.

Before we begin, my apologies for being away the last couple of weeks. I had double pneumonia and asthma, which is not a fun combination. I also got tested for COVID-19 twice, and while the nasal swab test isn’t as bad as it appears on video, it’s not something that will make you say “Hey! That was fun!”

But enough about me. Let’s get to the season.

Do you bleed blue?

You may occasionally receive promotional content from the Los Angeles Times.

So, what is this season going to look like? A lot different from any season we have ever experienced. From new rules to expanded rosters, the game is going to be a lot different.

Your support helps us deliver the news that matters most. Become a Los Angeles Times subscriber.

--Teams will report to training camps at their home stadiums by July 1 in preparation for a regular season of 60 games.

--No fans in the stadium, at least at the start.

--The postseason will remain at 10 teams.

--There will be a designated hitter in the National League.

--Teams will play 40 games within their division and 20 interleague games against teams from the opposite division (NL West vs. AL West, etc.). This is to minimize travel. So, yes, we will get to see the Dodgers take on the Astros.

--All extra-inning games will start with a runner on second base beginning in the 10th inning to prevent long games that lead to more contact among people.

--The three-batter rule for pitchers will be in effect.

--Spitting and sunflower seeds are prohibited. Chewing gum is allowed.

--Players who are considered high risk for COVID-19 will have the option to not play and still receive their salary.

--Players will be tested for the virus every other day during the regular season.

--Everyone who enters a stadium must fill out a questionnaire and have their temperatures checked.

--Everyone must wear a face covering at stadiums and facilities unless they’re playing, practicing or working out.

--No high-fives, fist bumps or hugs.

--No lineup card exchange between the managers before the game.

--Pitchers will be allowed to carry a wet rag to avoid licking their fingers for moisture.

--Pitchers must have their own rosin bag.

--Players must use their own pine tar rags, bat donuts, and other equipment in the on-deck circle.

--Players must retrieve their own hats, gloves, sunglasses, etc. from the dugout to take on to the field even if they end the inning on base or at the plate.

--Players are “strongly discouraged” from throwing the ball around the infield after an out.

--Mascots are allowed in stadiums, but not on the field. (Although with no fans, what is the point of a mascot?)

--Teams can carry a taxi squad of up to three players on the road. One must be a catcher.

--Taxi squad members will get paid their minor league salaries, but receive the standard MLB allowance of $108.50 per day.

--Teams can have up to 20 players stationed at an alternate training site. MLB requires the site be close enough to travel to and from without flying commercial.

--Players must be on rosters by Sept. 15 to be eligible for the postseason.

The Dodgers on Sunday named 51 players to their initial 2020 season player pool. The 60-man player pools were created just for this year’s shortened season.

Will you be allowed to go to Dodger Stadium to watch a game this season? Unlikely, but it’s possible some teams will let their fans in at some point. MLB has said that “clubs may permit fan attendance at games with the approval of MLB and relevant local authorities.”

Dodgers President Stan Kasten said he doesn’t expect fans will be allowed at Dodger Stadium in the near future.

“It is not on the table any time soon,” Kasten said. “Obviously, when it is safe for fans to show up, we’d love for that to happen, even if it’s a small number to begin. But I think we’re going away from even thinking about that.”

No one on the Dodgers has opted out of the season yet, but some players on other teams announced they would sit out the season. Arizona pitcher Mike Leake was the first to say so, and he was followed by Washington infielder Ryan Zimmerman and pitcher Joe Ross. Also, Minnesota informed bullpen coach Bob McClure, 68, and major league coach Bill Evers, 66, that they will not be working games this year because of health and safety concerns.

It’s not official yet, but it looks as if there will be no All-Star game this season. Dodger Stadium was going to host the game on July 14, but it seems highly unlikely you can have an All-Star game in such a compressed season, especially with COVID-19 still running rampant.

We will discuss Andrew Toles’ situation on Thursday. In the meantime, watch Toles hit a go-ahead grand slam in the ninth inning. Watch it here.