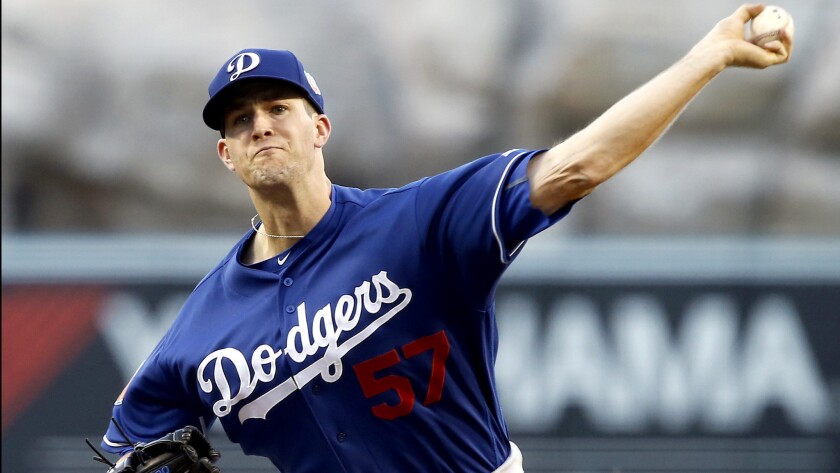 Dodgers Dugout: Looking at the offseason moves so far

Hi, and welcome to another edition of Dodgers Dugout. My name is Houston Mitchell and it’s time to move on from 2017 and 2018 and look forward to next season.

Those of you hoping for more outrage over the 2017 World Series and the cheating by the Astros, sorry, but it’s time to move on. We can hope MLB increases its penalty, and see what it does to Alex Cora and the 2018 Red Sox, but we can rant and rave from now until the cows come home and it won’t change the fact that the Astros got to celebrate at Dodger Stadium, the Dodgers and the fans didn’t, and no amount of complaining will erase that. Unless one of us can find an Infinity Gauntlet and go back in time, we may as well move on to 2020.

All Dodgers, all the time. Delivered at the start of each series.

And if you are as mad as I am that the Astros are showing absolutely no remorse, then read this column by Bill Plaschke.

What offseason improvements did the Dodgers make for 2020? Let’s take a look:

--Signed LHP Alex Wood to a one-year, $4-million deal that could reach $10 million with incentives.

Wood was a Dodger from 2015-18 and went 16-3 with a 2.72 ERA in 2017. He was traded, along with Yasiel Puig and Matt Kemp, to Cincinnati after the 2018 season for minor leaguers Jeter Downs, Josiah Gray and Homer Bailey. Considering the Reds no longer have Wood, Puig or Kemp, and Gray (No. 4) and Downs (No. 5) are top-10 prospects for the Dodgers, I’d have to consider that trade a big win for L.A.

Wood went 1-3 with a 5.80 ERA in seven starts with the Reds last season. He was hampered by a back injury for much of the season.

--Signed RHP Jimmy Nelson to a one-year $1.25-million deal that could reach $3 million with incentives.

--Signed RHP Blake Treinen to a one-year, $10-million contract. Treinen is a reliever and was one of the best in the game… two seasons ago. In 2018, he had a 0.78 ERA, 1.82 FIP (fielding independent pitching), and 0.83 WHIP (walks and hits per innings pitched). He struck out 11.2 batters per nine innings, posted 38 saves, and made the American League All-Star team as the Athletics’ closer.

Last season he had a 4.91 ERA and 16 saves. So which pitcher is the real Treinen? The truth is probably somewhere in between.

The Dodgers also acquired... wait, there must be something wrong here. That’s it? That’s all they got so far?

Meanwhile, they lost Hyun-Jin Ryu to Toronto and Rich Hill to Minnesota. They will also be without David Freese, who retired, and Russell Martin, who is still a free agent.

They also lost out on signing Gerrit Cole, Anthony Rendon, Dallas Keuchel, Josh Donaldson and any other prominent free agent on the market. They made a serious run at Cole, apparently offering him eight years, $300 million. Rendon didn’t want to play for the Dodgers, Keuchel went elsewhere and Donaldson really isn’t worth the four-year, $90 million he got from the Twins.

So why would a team that has come up short in the playoffs time and time again not really improve the team in the off-season? In fact, you could argue they are worse with the loss of Ryu and Hill. Blame the NL West. The Dodgers are prohibitive favorites to win the NL West again in 2020. Sportsbooks have set their over/under for Dodger wins this season at 98.5. The next-highest NL West team? San Diego at 83.5.

But really, if you have been paying attention the last few seasons, the fact the Dodgers did not make a big free-agent signing should not come as a surprise. The current regime does not do that. They believe in tweaking the team around the trade deadline, like they did in 2018 by acquiring Manny Machado, and in 2019 by acquiring Jedd Gyorko and Adam Kolarek.

The frustrating part of this for me isn’t that they didn’t acquire anyone. That’s not a surprise. It’s that they have set up the same narrative they have had for a few seasons now. Every time they slump, fans (rightfully so) will complain about the lack of new faces. It will be a season-long grind, just waiting for the playoffs to begin while having that sense of dread in your stomach that they will again fail when they get there. It’s like watching the same movie over and over. The first time it’s thrilling, but by the seventh time, you know what’s going to happen: The hero dies at the end. And the movie becomes depressing.

Of course, there’s still time to make a trade, but I wouldn’t hold my breath. The Dodgers will go into spring training with basically this 40-man roster.

Something new this season. We didn’t do enough fun stuff last season, so I wanted to change that and dip into the rich history of the Dodgers. I am going to run a 32-team tournament featuring the 32 best Dodger teams of all time (since 1901). I will seed them from 1-32 and match them up, March Madness style, with each round being a best-of-seven series. I will be using the Strat-O-Matic game engine. Each week, I will give you updates with who won each series. And you may be wondering, “What does this prove?” Answer: Absolutely nothing. But it will be fun and give us a chance to explore Dodger history. Remember when baseball was fun? Let’s bring that back.

I need your help selecting the teams. Here’s what I have so far:

Teams that won the World Series

Teams that lost in the World Series

Teams with winning percentage above .600 not already in

I need seven more teams. I could pick them myself, but I’d rather you all choose. Which team would you like to see in the tournament? Just email me at [email protected] and let me know.

An aerial tour of the Dodger Stadium renovations. Watch it here.