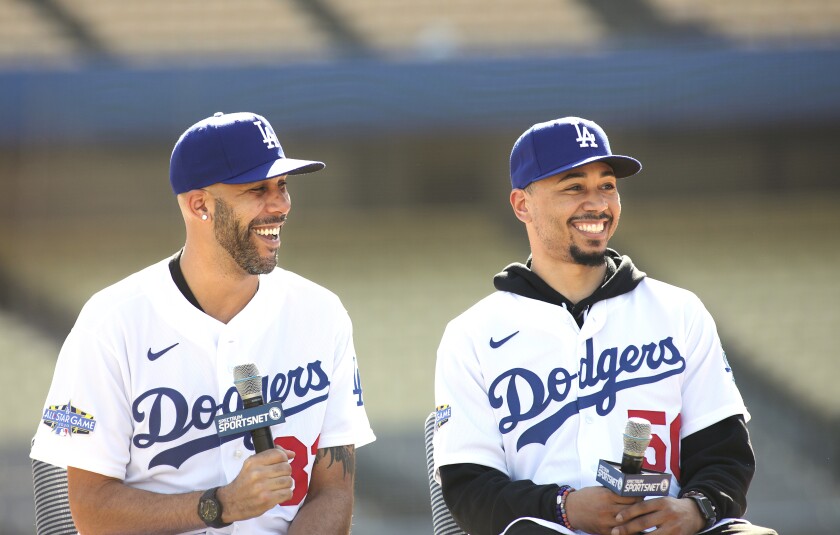 Hi, and welcome to another edition of Dodgers Dugout. My name is Houston Mitchell and it certainly has been an interesting week since last we spoke.

The Mookie Betts trade fell apart when Boston didn’t like the medical report on Minnesota pitcher Brusdar Graterol. He had Tommy John surgery in 2015, which the Red Sox knew about, and it’s not clear what about his medical report they didn’t like. (Conspiracy theorists will tell you that they actually got cold feet because the Dodgers fleeced them in the original trade and they felt embarrassed).

So, the trade was put on hold until it could be reworked. Which it was. Here’s the new deal:

To the DodgersOF Mookie BettsP David Price$48 million to cover half of the remaining $96 million on Price’s contract.

The trade isn’t quite as brilliant as the original one, but it is still a win for the Dodgers. They get one of the five best players in the game. David Price will fill Rich Hill’s spot. Yes, they are giving up quality in Verdugo, Downs and Wong, but you don’t get a great player in return for nothing.

Downs was acquired before last season as part of the trade that send Yasiel Puig, Matt Kemp and Alex Wood to Cincinnati. He is 21 and hit .276/.362/.526 last season at Class A Rancho Cucamonga and double-A Tulsa. He had 24 homers and 35 doubles with 24 steals. He was considered a top 10 Dodgers prospect but was stuck behind Corey Seager and Gavin Lux at the major-league level (which he probably won’t be ready for until late 2021 at the earliest). And with a farm system as deep as the Dodgers, this still leaves them with top 30 prospects Michael Busch, Devin Mann and Omar Estevez at middle infield.

Wong is 23 and also split last season between Rancho and Tulsa, where he combined to hit .281/.336/.541 with 24 homers and 11 steals. However, he was considered only the No. 4 catching prospect for the Dodgers, behind Will Smith, Keibert Ruiz and Diego Cartaya.

In a separate trade, the Dodgers sent Kenta Maeda to Minnesota for Graterol. I liked Maeda. He’s a solid middle-of-the-rotation guy who keeps his team in games. Graterol will head to the bullpen. He throws 100-mph, so you can see why the Dodgers like him.

So, here’s the Dodgers rotation for next season as of now:

Dustin May or Tony Gonsolin or Jimmy Nelson or Alex Wood, or a combination of all of them.

The last fallout from the trade was this: The Joc Pederson and Ross Stripling to the Angels for Luis Rengifo was called off by the Angels. They got tired of waiting and canceled the trade. Foolish, since it was a really good trade for them. The Dodgers are believed to still have Pederson on the market.

Betts is wearing No. 50. Key Dodger to wear No. 50 in the past: Jay Howell. It was last worn by Jaime Schultz last season.

Price is wearing No. 33. Key Dodgers to wear No. 33 in the past: Scott Van Slyke, Blake DeWitt, Brian Jordan, Eddie Murray, Eric Davis, Jeff Hamilton and Vic Davalillo. It was last worn by Breyvic Valera in 2018.

Graterol is wearing No. 48. Key Dodgers to wear No. 48 in the past: Ramon Martinez, Dave Stewart, Karl Spooner. It was last worn by Gavin Lux last season.

I get an email a day from readers wondering where Russell Martin is. He’s still a free agent, waiting to be signed.

For those wondering what is going on with the renovations at Dodger Stadium, Helene Elliott wrote a brilliant column about it here. Here’s an excerpt:

“A planned $100-million offseason renovation of Dodger Stadium that focused on adding five elevators and four escalators, creating a “front door” and sprucing up the outfield pavilions is expected to be ready for opening day against the San Francisco Giants on March 26 but won’t be done in time for exhibitions against the Angels on March 23 and 24. That’s cutting it close.

“Janet Marie Smith, the Dodgers’ senior vice president of planning and development, said the team will be able to ‘use the entirety of the stadium between the foul poles’ in the main seating areas from home plate outward during those preseason games but the work in center field won’t be done by then. ‘We’ll give our contractors a few more days in the outfield,’ Smith said.

“They apparently will need every minute. Bridges that will connect the pavilions to the rest of the stadium and allow fans to walk freely around the park appeared Wednesday to be in the early stages of construction, and piles of dirt covered unfinished projects behind the pavilions. The sound of hammering and other construction noise provided the backdrop for the news conference until workers were given a break. Many of them put down their tools and watched the proceedings.’

You can read the whole thing by clicking here.

Starting next week, this newsletter will be sent from a slightly different email address. To ensure you keep getting it, please add [email protected] to your contacts or safe senders list. And if you still don’t see it in your inbox next week, please check spam and mark it “not spam.”

Any issues, questions or other thoughts? Please email me the old way at [email protected]

This info is repeated below, but if you’re like me, you scroll past anything that resembles an ad.

There are some new rules this season for the game. Here’s a quick rundown:

Relievers must face three batters or pitch to the end of an inning: This will mainly impact left-handed specialists, who often come in to face just one batter.

26-man rosters: Active rosters increase from 25 to 26 players for the regular season (through Aug. 31) and during the playoffs. Teams can’t carry more than 13 pitchers.

No more 40-man September rosters: Teams will be limited to 28 players in September, with a maximum of 14 pitchers.

The 27th man: Teams can call up an extra player in special circumstances -- mainly for a doubleheader. That includes a 14th pitcher if need be.

Challenge rules: Managers now only have 20 seconds to decide to challenge a play instead of 30.

Mookie Betts and David Price are introduced as Dodgers. Watch it here.