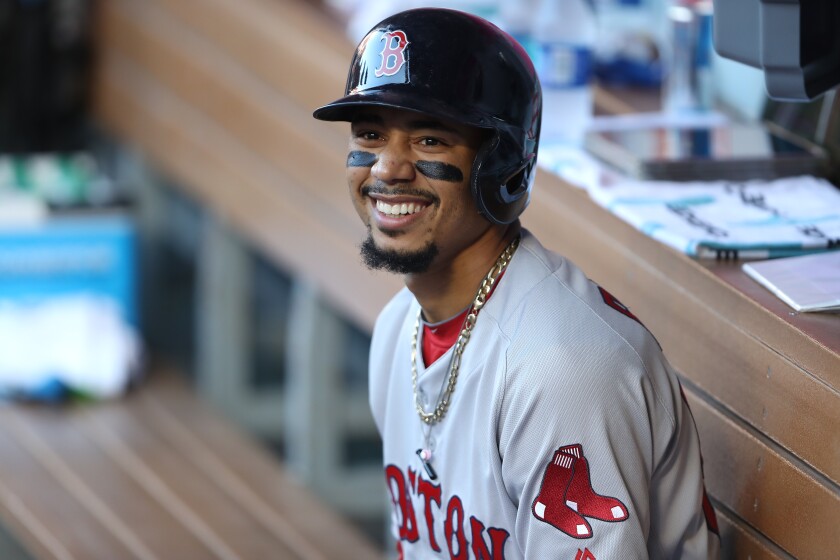 Hi, and welcome to another edition of Dodgers Dugout. My name is Houston Mitchell.

Well, if you are one of the Dodgers fans who complain that the front office never makes the big move to push this team over the top, then you can’t complain anymore.

If you missed it, the Dodgers acquired outfielder Mookie Betts and pitcher David Price from the Boston Red Sox. We’ll get to the exact details of the trades in a minute, but they effectively acquired those two players in exchange for Alex Verdugo and Kenta Maeda, with Verdugo going to Boston and Maeda going to Minnesota, which sent a pitching prospect to Boston.

In short, this is a brilliant trade. The Dodgers get Betts, who is one of the five best players in the game and got him without having to give up Gavin Lux, Will Smith, Keibert Ruiz or Dustin May. They also get a left-handed pitcher in Price, who can slot into the Rich Hill role as the “oft-injured left-hander who will give you 20 starts a year” role. Plus, Boston is rumored to be paying about half the remaining $96 million on Price’s contract.

If you’ve subscribed to this newsletter since the beginning, you know I am not shy about calling out the Dodgers on mistakes they make. And I have racked my brains trying to see a downside to this deal. But there isn’t one. OK, sure, it’s possible Betts gets hurt in his first game and never plays for the Dodgers. But realistically, the Dodgers would have been fools to turn this deal down.

Betts plays right field, was the 2018 AL MVP and has won a Gold Glove the last four seasons. Let’s take a look at his stats since his first full season in 2015:

If you are a fan of the Wins Above Replacement stat, then take a look at where Betts ranks among players in career WAR after their first six seasons:

Any time you find yourself on a list in between Joe DiMaggio and Mickey Mantle, you know you are in pretty good company.

Giving up Verdugo is not easy. I like him a lot. He’s going to be a good player. But he’s not going to be a Mookie Betts. Plus, Verdugo is already struggling with back issues, which is never a good sign in a young player. Those can be chronic.

I like Maeda too. But we all know what Maeda is: A good pitcher who eats up innings and gets shuttled to the bullpen in the postseason, where he pitches well.

You have to give up some quality to get quality, but the Dodgers received far more than they gave up.

Of course, you can juggle those bottom four, but I like that R-L-R-L lineup, especially with the new rule that relievers have to face three batters in an inning.

It is true that Betts is a free agent after this season. So, the Dodgers may have him for only one year. Still worth it. And if Dodgers fans rally behind Betts and he helps the team finally win another World Series, then you never know what will happen in free agency. He could be a one-year guy, he could be here longer. Great trade either way.

Does this guarantee the Dodgers will win the World Series? Of course not. They still have some concerns in the bullpen, particularly with Kenley Jansen. And their starting rotation right now is:

The question with trades should be this: Does this make the Dodgers a better team? The answer is a clear yes. I tip my cap to Andrew Friedman, something that is rarely done in this newsletter. But he has more than earned it with this deal.

Some people have written to ask how the Dodgers can welcome a guy who was on a team that cheated against them in the 2018 World Series. It’s pretty simple. Here’s how they do it: “Mookie, one of the five best players in the game. Welcome to the Dodgers.”

Read more about the trade

In an apparent second trade Tuesday, the Dodgers sent outfielder Joc Pederson, pitcher Ross Stripling and outfield prospect Andy Pages to the Angels for infielder Luis Rengifo and two minor leaguers whose identities are unknown at the time I am writing this. In fact, the whole trade seems shrouded in mystery despite the fact it has been reported multiple places online. Perhaps it will be finalized by the time you read this.

Although it wasn’t officially part of the Betts deal, it’s unlikely this trade would have been made without the other one happening first. It seems to be a straight salary dump, with Pederson scheduled to earn either $7.75 million or $9.5 million this season, depending on what happens in his arbitration case.

Pederson had the best season of his career last year, hitting .249/.339/.538/127 OPS+, with 36 homers. His biggest drawbacks are his streakiness (batting average each month last season: .239, .323, .186, .200, .237, .344) and his continued inability to hit left-handers. With Bellinger and Betts manning two spots in the outfield, Pederson would have split playing time with AJ Pollock, Matt Beaty and Chris Taylor in left. His rising salary leaves him the odd man out in that scenario and he should fit nicely into the Angels lineup. I will really miss his extremely boring and cliche-filled postgame interviews with Alanna Rizzo.

Pages is 19 and hit 19 homers for Rookie League Ogden last season. He has 29 homers in 401 minor-league at bats.

In return, the Dodgers get Rengifo, who is a middle infielder and a line-drive hitter. He will give them depth in the infield and it wouldn’t be surprising to see him sent back and forth between the Dodgers and the minors throughout the season.

A look at the players involved in Tuesday’s deals involving the Dodgers, Red Sox, Twins and Angels.

Mookie Betts, 27, OF : Betts was named AL MVP in 2018 and is considered by most to be one of the top five players in the game. He is eligible for free agency after the season. He hit .295 with 40 doubles, 29 homers and scored 135 runs last season.

Going from Dodgers to Red Sox

Alex Verdugo, 23, OF: Considered one of the team’s top prospects, Verdugo hit .294 with 12 homers and 44 RBIs in 106 games before he was sidelined by a back injury.

Brusdar Graterol, 21, RHP: Graterol is the Twins’ No. 3 prospect and has a 100-mph fastball. The Dodgers acquired him from Minnesota on Tuesday for Kenta Maeda and immediately flipped him to Boston as part of the Betts trade.

Going from Dodgers to Twins

Kenta Maeda, 31, RHP: Maeda went 47-35 with a 3.87 ERA in four seasons with the Dodgers, including 10-8 and 4.04 last season. He pitched effectively out of the bullpen in the last three postseasons. He has four years remaining on a contract that features heavy incentives.

Going from Dodgers to Angels

Joc Pederson, 27, OF: He had arguably his best season last year, hitting .249 with 36 homers and 74 RBIs. Never was able to hit left-handers though, hitting .188 against them in his career. He is eligible for arbitration, with the team offering $7.75 million and Pederson asking for $9.5 million.

Andy Pages, 19, OF: Pages hit 19 homers for Rookie League Ogden last season. He has 29 homers in 401 minor-league at bats. It is way too soon to know what kind of player he will be or even if he will make the majors.

Going from Angels to Dodgers

Luis Rengifo, 22, IF: Regifo played second and short for the Angels last season, hitting .238 with seven homers in 108 games. He had a good batting eye in the minors but struck out 93 times in 357 at-bats last season.

Something new this season. We didn’t do enough fun stuff last season, so I wanted to change that and dip into the rich history of the Dodgers. I am going to run a 32-team tournament featuring the 32 best Dodger teams of all time (since 1901). I will seed them from 1-32 and match them up, March Madness style, with each round being a best-of-seven series. I will be using the Strat-O-Matic game engine. Each week when the season begins, I will give you updates with who won each series. And you may be wondering, “What does this prove?” Answer: Absolutely nothing. But it will be fun and give us a chance to explore Dodger history. Remember when baseball was fun? Let’s bring that back.

I asked your help in selecting the remaining seven teams on the list. You responded beautifully, thank you. So here’s the final list (seedings will be announced later).

Teams that won the World Series

Teams that lost in the World Series

Teams with winning percentage above .600 not already in