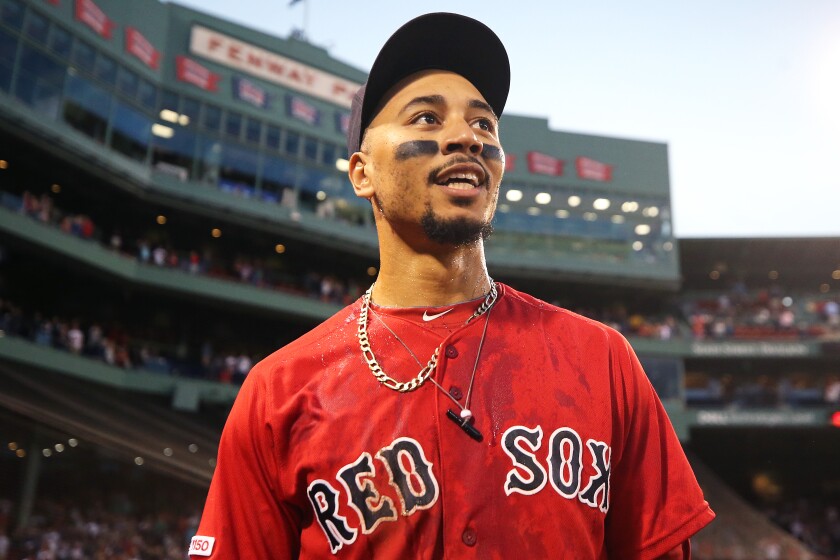 The Dodgers jostled a sleepy offseason awake with a blockbuster three-team trade Tuesday that will bring 2018 American League most valuable player Mookie Betts and 2012 AL Cy Young Award winner David Price to Los Angeles from Boston, according to two people with knowledge of the transaction.

The Red Sox, in search of salary relief after carrying baseball’s highest payroll for the past two seasons, dealt the star right fielder and veteran left-hander to the Dodgers, who sent second-year outfielder Alex Verdugo to the Red Sox and right-handed pitcher Kenta Maeda to the Minnesota Twins. The Twins reportedly shipped minor league pitcher Brusdar Graterol to the Red Sox.

In a separate deal, the Dodgers reportedly traded outfielder Joc Pederson to the Angels for middle infielder Luis Rengifo, who batted .238 with seven home runs in 357 at-bats as a rookie last season, a move that will bring some payroll relief to the Dodgers. Pederson hit a career-high 36 home runs last season and will make either $9.5 million or $7.75 million in his last year of arbitration, depending on an arbitrator’s decision.

All the trades are contingent on players passing medical examinations. And none of the players the Dodgers dealt are minor league prospects, let alone top prospects Gavin Lux and Dustin May.

Betts, 27, will team with third baseman Justin Turner to give the Dodgers two right-handed sluggers to complement their array of premier left-handed batters that includes Cody Bellinger — the reigning National League MVP — Max Muncy and Corey Seager. Price, 34, will help offset the loss of free-agent starters Hyun-Jin Ryu to Toronto and Rich Hill to Minnesota.

Betts, who will make $27 million in his final year of arbitration this season, will be eligible for free agency after 2020, and he could command a multi-year deal in excess of $300 million next winter. The Red Sox would not grant the Dodgers a window to negotiate an extension with Betts, but he probably wouldn’t have engaged with them anyway because he wants to become a free agent after this season. Price has three years and $96 million left on the seven-year, $217-million contract he signed as a free agent with Boston before 2016.

Betts batted leadoff nearly 70% of the time with Boston. He likely will bat leadoff for the Dodgers, who for years have struggled to find a consistent leadoff batter who combines the ability to reach base with power and speed. Betts has batted .302 with a .910 OPS from the leadoff spot in his career.

Price won his Cy Young Award in 2012 when he went 20-5 with a 2.56 ERA, striking out 205 and walking 59 in 211 innings, for Tampa Bay. He spent the first six years of a 12-year career with the Rays under then-general manager Andrew Friedman, who is now the president of baseball operations for the Dodgers.

Price was slowed by a left-wrist injury in 2019, going 7-5 with a 4.28 ERA in 22 starts and undergoing surgery to remove a cyst from the wrist in late-September. He also missed time in 2018 because of carpal tunnel syndrome and circulatory issues in the same wrist.

Verdugo batted .294 in 343 at-bats as a rookie last season but missed the last two months with an oblique strain and a back injury. Verdugo played all three outfield positions. Betts will play right field. Maeda was a valuable arm in the starting rotation and bullpen since coming over from Japan four years ago.

Until this trade, the Dodgers’ only significant moves this winter had been the signing of free-agent reliever Blake Treinen to a one-year, $10-million deal. The Dodgers were outbid for ace Gerrit Cole and were told by top-tier free-agent third baseman Anthony Rendon that he didn’t want to play for them. The Dodgers also signed two starting pitchers coming off injuries — Alex Wood and Jimmy Nelson — to one-year deals.

The trade would make it more likely that the Dodgers would pay a luxury tax for exceeding the $208-million competitive balance tax threshold for the first time in three years unless the Red Sox take on a significant portion of Price’s contract. However, it’s not certain because the tax is assessed on payroll at the end of the season, not the beginning.

The Dodgers and Red Sox are no strangers to blockbuster deals involving high-priced players. The Dodgers acquired first baseman Adrian Gonzalez, outfielder Carl Crawford and pitcher Josh Beckett in a 2012 deal in which roughly $250 million in salary obligations moved from Boston to Los Angeles.

And Friedman is no stranger to Red Sox rookie general manager Chaim Bloom. Friedman hired Bloom to work for the Rays after Bloom graduated from Yale in 2004.