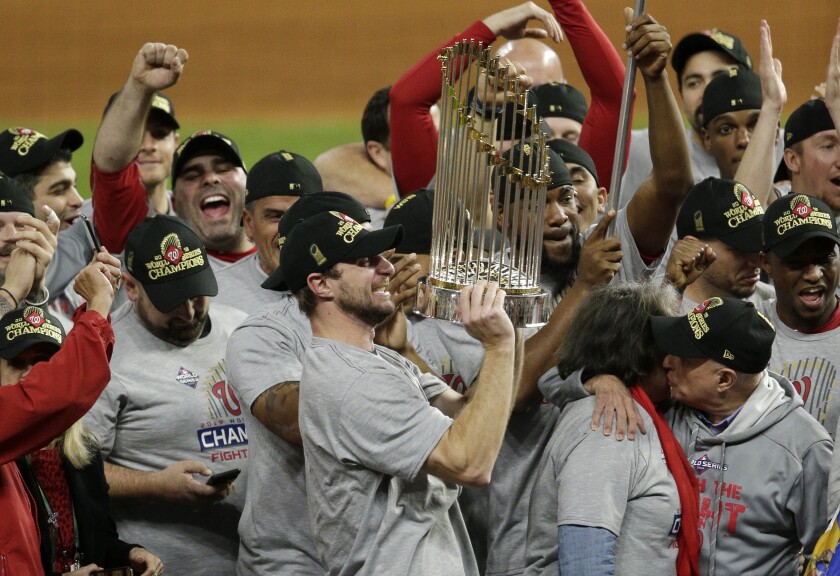 The Dodgers may not have advanced to the World Series for a third consecutive year in 2019, but they played a role in the Washington Nationals’ seven-game triumph over the Houston Astros.

According to a Washington Post report, several Dodgers reached out to Nationals second baseman and former Dodger Brian Dozier with information about the Astros’ sign-stealing scheme that might have cost Los Angeles the 2017 World Series, which they lost to Houston in seven games.

The Nationals took extra precautions ahead of the 2019 World Series, according to the Post:

The pitchers met on the Friday before the World Series started. They assigned each pitcher five sets of signs, all of which could be affixed to the inside of their caps. They outfitted catchers Yan Gomes and Kurt Suzuki with wristbands with all those signs, much like a quarterback who wears plays on his forearm. Although traditional sign-stealing requires a runner on second base who can see the catcher put down his fingers, the Nationals instructed their catchers to put down multiple signs even when there was only a runner on first or there was no one on base.

The idea was to cleanse the pitchers’ minds of any idea that Houston had an unfair advantage.

Concerns about the Astros’ methods had spread throughout baseball, affecting the way teams scouted and prepared for Houston. According to players, clubhouse staff members, scouts and executives interviewed by the Post, the notion that the Astros broke rules to steal signs was openly discussed.

“It was a big open secret, really big,” a veteran scout from another team whose coverage included the Astros told the Post. “Throughout baseball, throughout the scouting community, for several years, not just starting in 2017. I would say probably 2016, maybe earlier, through [2019], things were going on that were blatantly against the rules.”

Executives from several teams told the Post they complained to Major League Baseball, which did not take action until former Astros pitcher Mike Fiers went public last November with sign-stealing accusations. MLB launched an investigation and in January issued a report the detailed the illegal activity. Astros manager A.J. Hinch and general manager Jeff Luhnow were suspended for one year and subsequently were fired by Houston owner Jim Crane. No players were punished.

The Astros and Nationals share a spring training facility in West Palm Beach, Fla. Position players report over the weekend and the two teams open Grapefruit League play against each other Feb. 22.