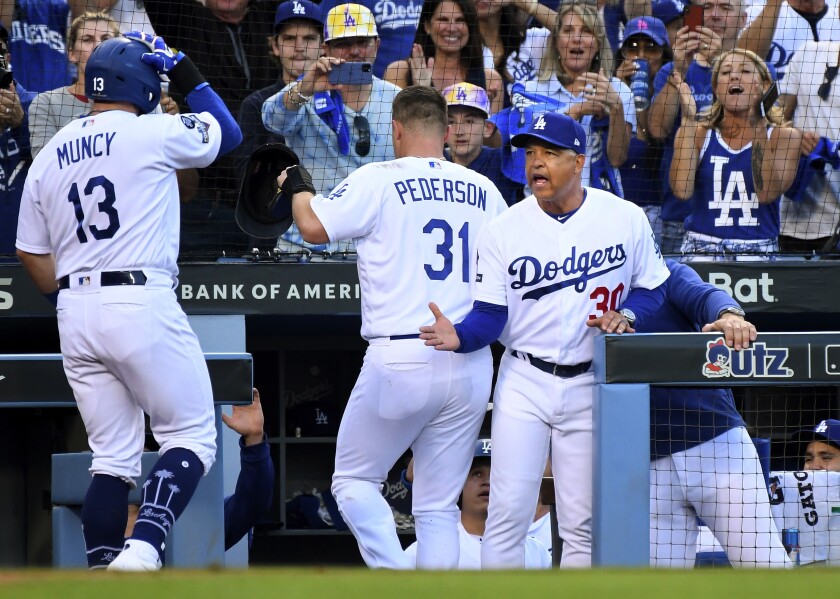 There aren’t many ways to significantly improve a 106-win team during an offseason, but the Dodgers pulled it off this week by acquiring Mookie Betts and David Price from the Boston Red Sox days before spring training.

The move, though not executed as smoothly the Dodgers hoped, was a booming conclusion to what had been a slow winter. It excited Los Angeles, riled up New England, and resonated in Las Vegas. Already the favorites to claim their third National League pennant in four years before the swap, they are now the overwhelming frontrunners. Not winning an eighth straight National League West title would qualify as a disaster. The gulf between them and their divisional opponents is not small.

While this is probably the best team Andrew Friedman has assembled since he took over as the Dodgers’ president of baseball operations in October 2014, the start of spring training does not equal the end of a club’s ability to improve its roster. The Dodgers have until the July 31 trade deadline to make substantial changes. They have often patched holes or upgraded spots during the summer for their playoff push.

But the start of the postseason is nearly nine months away. There will be traps to evade and attrition to avoid during the slog. Games are not won on paper, and every club has questions heading into a season. The Dodgers are no different. They have several, and a few surfaced over the last week as they put the finishing touches on their offseason more publicly than they had hoped.

How will the Dodgers proceed with Joc Pederson and Ross Stripling?

Last week, word leaked that the Dodgers had agreed to trade Pederson and Stripling to the Angels. The agreement was contingent on the first variation of the deal the Dodgers struck with the Red Sox to acquire Betts and Price, which was all but done. Until it wasn’t.

The deal fell through over the weekend as the Dodgers and Red Sox agreed to another trade, leaving an awkward situation for the Dodgers to clean up. Pederson and Stripling, unsure of their futures last week, are still Dodgers and were at the team’s spring training facility Thursday.

Friedman and manager Dave Roberts have maintained both players are happy and will help the Dodgers in 2020. Roberts said Pederson will play left field against right-handed pitchers. Stripling is expected to compete for a spot in the starting rotation. It’s a messy episode the Dodgers want to leave behind.

“I felt for the players, guys that we had, guys that we didn’t have, how it played out,” Roberts said. “But the good thing was I knew that these guys wanted ultimately to be here. So there really isn’t any damage control per se.”

Where does Brusdar Graterol fit?

Graterol’s first day in camp with the Dodgers did not last long; the right-hander was sent home Thursday with a fever after reporting to the team’s facility. But a fever wasn’t the health scare that raised Graterol’s profile last week.

Boston’s concerns with the 21-year-old prospect’s right arm stopped the organization from completing a three-team trade with the Dodgers and Minnesota Twins, igniting a debacle that was resolved when the Dodgers agreed to separate trades with Boston and Minnesota. Instead of going to Boston, Graterol went from Minnesota to Los Angeles as part of a trade that included Kenta Maeda going to the Twins.

Graterol underwent Tommy John surgery in 2016 and missed two months with a shoulder impingement last season. Concerns about his short-term arm health are real, but his fastball reaches triple digits and the Dodgers can afford to take the risk on his potential.

Roberts said Graterol is pegged as a reliever to begin the spring, though he has potential to start games in the future. They will closely manage his workload. If he emerges — and stays — healthy, he could be an asset at the back end of the bullpen this season.

Who will round out the starting rotation after Price’s addition?

Price this week joined Clayton Kershaw and Walker Buehler as the pitchers locked into a rotation spot on the opening day roster. It gets murky after that.

The Dodgers lost Maeda, Hyun-Jin Ryu and Rich Hill, and began the offseason by missing out on free agent Gerrit Cole, whom they envisioned partnering with Buehler atop the rotation. However, they still boast rotation depth.

The final spots will be occupied by a combination of Julio Urías, Alex Wood, Jimmy Nelson, Stripling, Dustin May, and Tony Gonsolin. Dodgers brass has insisted they view Urías as a starter in 2020. If so, that leaves five candidates for one spot.

While May might have the highest ceiling, he’s 22 years old and the Dodgers could justify sending him to the minors to begin the season. Nelson has made three starts over the last two years because of injuries and Wood returned to Los Angeles after an injury-riddled season with the Cincinnati Reds.

Stripling has proven capable of the role — he made the All-Star team as a starter in 2018 — but the Dodgers just tried trading him. Gonsolin has impressed since becoming a starter in 2018, but struggled with inconsistency in the minors last season.

In all likelihood, most, if not all, six pitchers competing for the final two spots will start games for the Dodgers this season. Injuries happen and the Dodgers don’t shy away from skipping starts or giving pitchers extra rest to improve the chances of being healthy for the playoffs. They’ll play the entire season with an eye on October.