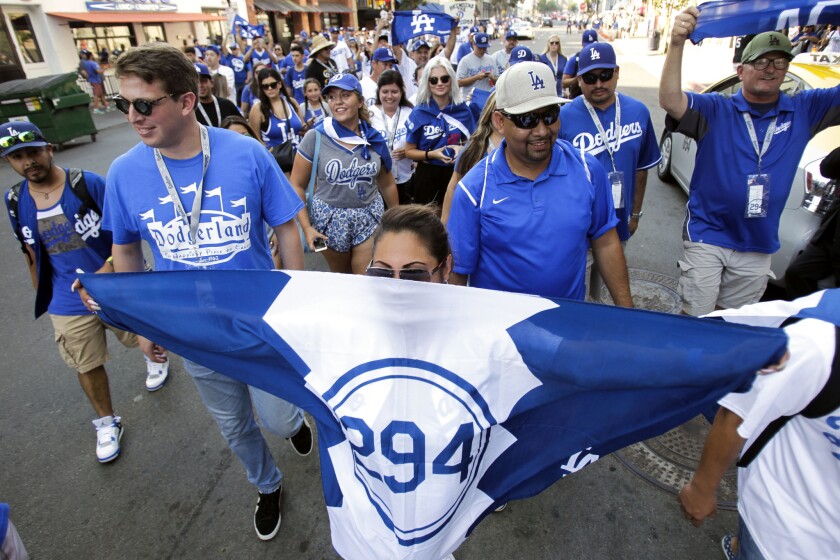 The Dodgers are not scheduled to play the Houston Astros next season. That would seem to spare the Astros the in-person wrath of Dodgers fans.

Unless, of course, Dodgers fans bring their wrath to the Astros. And the baseball gods have teed this one up for Dodgers fans: The Astros play their first weekend road series this year at Angel Stadium.

So we checked with Pantone 294, the Dodgers fan group that has delivered as many as 2,200 diehards to a Dodgers road game. And, yeah, Pantone 294 is thinking about chartering a fleet of buses, packing them with a thousand or more Dodgers fans, and forming a caravan down Interstate 5 to greet the Astros in Anaheim.

“It would be a really cool idea to do,” co-owner Desiree Garcia said.

On Monday, Commissioner Rob Manfred issued a report detailing how the Astros illegally used technology to steal signs during the 2017 season, when the Astros beat the Dodgers in the World Series. Manfred fined the Astros $5 million and suspended manager A.J. Hinch and general manager Jeff Luhnow for this season.

None of that discipline eases the sting for Dodgers fans. The cries for justice have manifested themselves in emotional ways: calls for a 2017 championship parade that would not interest the players; threats of a lawsuit against the Astros for fraud that surely would be laughed out of court; a pending Los Angeles City Council vote on a purely symbolic resolution that would ask Major League Baseball to strip the Astros of their title and award it to the Dodgers. (MLB won’t do that.)

“It was getting ridiculous,” Garcia said.

Nine innings of Pantone 294 would seem to be an appropriate fan punishment for the Astros: sustained booing, an assortment of Dodgers T-shirts and clever slogans, and the unveiling of the traditional Dodgers flag that covers an entire section.

But Garcia said the Pantone 294 owners need to respect the Angels too. She said the group plans to buy 1,200 tickets from the Angels when the Dodgers play in Anaheim in July, and she said she would consult with the Angels before trying to buy a block of tickets for Dodgers fans to boo the Astros.

“As Dodger fans, we definitely feel like we’ve been cheated out of something,” she said. “We don’t know if we’re willing to take that business risk and bring a bunch of angry people to Angel Stadium.”

Once the initial wave of raw emotion dies down, Garcia said Pantone 294 would be in a better position to decide whether the trip to Anaheim -- to boo the Astros in a game the Dodgers would not be playing -- would be worth pursuing.

All she knows for sure right now is what would have happened had the Dodgers played in Houston this year.

“We would already have arranged flights,” she said.