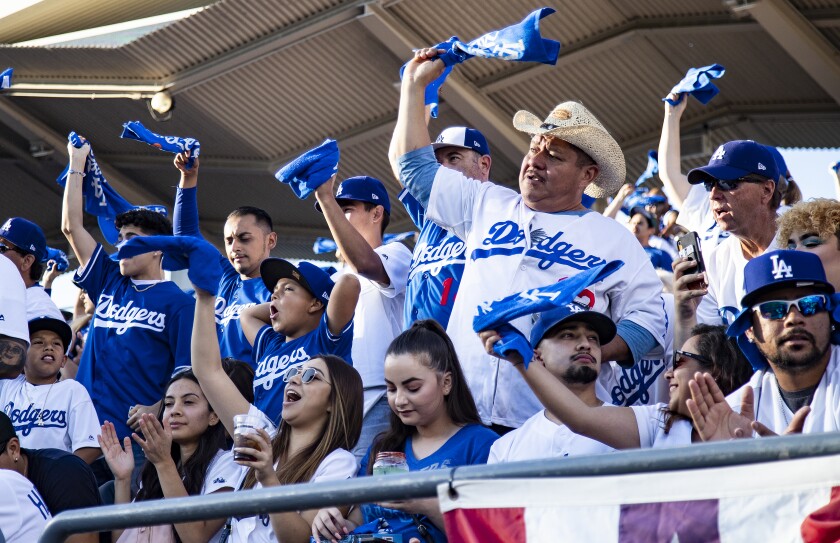 Pitcher Ross Stripling was onstage at the Dodgers’ fan festival Saturday, waiting to talk with team broadcaster Nomar Garciaparra. Stripling had to wait longer than he had anticipated, he said, because Garciaparra said something about the Houston Astros, and the crowd erupted into 30 solid seconds of boos.

To those fans that believe the Dodgers came within one game and one cheating opponent of the first World Series parade in Los Angeles since 1988, the pain had not subsided 12 days after Major League Baseball sanctioned the Astros for cheating.

The Astros were fined $5 million, and their owner fired the manager and general manager. But the league did not strip the Astros of the World Series championship they won in 2017, when they beat the Dodgers in seven games, and that has left some Dodgers fans feeling powerless.

“I like it,” Stripling said. “The Dodger fans are fired up. If they want to do their part, and they think that is what it is, then kudos to them. Go do it.

“I know that they’re passionate, and they wanted a championship as much as we did. Obviously, they have still got some fire in their belly to go fight for us.”

The Angels have agreed to sell the group a block of as many as 800 tickets, Pantone 294 co-owner Desiree Garcia said — in the view level, high above the first-base line.

The group regularly arranges trips for Dodgers games in Anaheim. After The Times wrote about the group’s interest in bringing Dodgers fans to jeer the Astros in Anaheim, she said, the Angels reached out and invited Pantone 294.

Chodzko said all fans are asked to comply with a code of conduct. Garcia said she did not anticipate any issues with her group but said the Angel Stadium outing could help resolve fan frustration over a World Series in which the team sanctioned by the league for cheating was not stripped of its championship.

“A lot of fans are upset,” Garcia said. “This will give them an outlet to voice their opinion.”

Garcia said she was sensitive to the perception that the trip is all about Dodgers fans booing the Astros. The group is advertising the event this way: “Let’s go and support the team that’s playing the game we all know and love the right way!” Yet that web page also features a picture of the Astros hoisting the championship trophy, with the word “VOID” superimposed over it.

Of course, the Astros might not be the only target of jeers. The Angels’ third baseman, Anthony Rendon, famously cited “the Hollywood lifestyle” in explaining why he spurned the Dodgers in free agency. Could Rendon draw a few boos too?