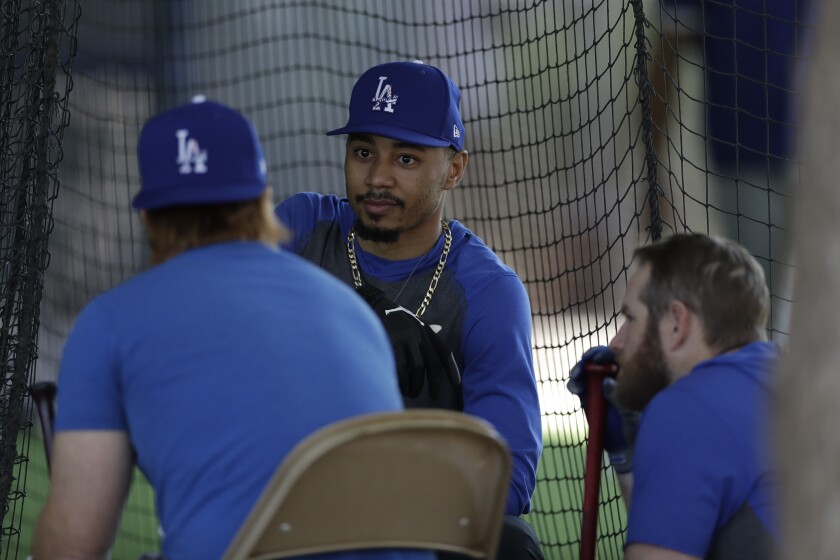 The Dodgers clubhouse was a bustling scene. Players shuttled in and out. Some carried bats to the cage. Some were sweaty from workouts. Most had an arm wrapped after having blood drawn.

It felt like a typical spring training morning. But in the midst of the activity, reporters encircled Clayton Kershaw as a reminder of just how abnormal this spring training has been. For the third time in five days, Kershaw was asked about the Houston Astros’ cheating scandal.

He declined to offer his opinion on commissioner Rob Manfred’s recent controversial comments, but acknowledged that Mike Trout, the consensus best player in baseball, saying he lost respect for the scheme’s participants “hurts.” Kershaw then tried to change the subject.

“The only thing I will say now is we’ve got a great season coming up,” he said. “Everybody is really excited about baseball. Baseball is in a great spot. We’ve got a lot of incredible players. I love baseball. I’m excited about it.”

It was an attempt to shift the narrative to normalcy, to the upcoming season. It was nearly a week into spring training and the same questions kept coming.

It was also wishful thinking. The scandal isn’t over. Its cloud will hang over the season across the majors, with each stop the Astros make around the country. Tension will rise every time the Astros hear jeers on the road and boil over every time a player catches a fastball in the ribs.

The fervor has extended beyond sports. On Wednesday, Rep. Bobby Rush (D-Ill.) followed up on his request for a Congressional Oversight hearing into the scandal in a letter to leadership of the House Committee on Energy and Commerce.

“It is now clear that Major League Baseball organization’s sanctions against specific individuals was not an adequate response,” Rush wrote. “It is my opinion that MLB has failed to appreciate the severity of the scandal and, therefore, has failed to react appropriately.”

The Dodgers aren’t scheduled to face the Astros this season — the only time an Astros player is slated to appear at Dodger Stadium this summer is at the All-Star game — but their loss to Houston in the 2017 World Series binds them to the controversy. They remain livid — not just about the cheating but with the Astros’ response to the backlash and Manfred’s handling of the case. It has been open season on the commissioner, with third baseman Justin Turner fronting the charge.

The situation might soon take an awkward turn when MLB releases the results of its investigation into illicit activities by the 2018 Boston Red Sox, expected by the end of the month. Mookie Betts and David Price, the Dodgers’ two high-profile acquisitions during the offseason, were on that Red Sox team that beat the Dodgers in the World Series. What happens if MLB’s report outlines an illegal operation that influenced that result?

“If it comes out, I think we’ll cross that bridge if we get to it,” Dodgers manager Dave Roberts said. “I just really don’t feel the value in even entertaining that right now.”

Roberts did not intend on having anyone from the front office speak to the team as a whole about the scandal when he arrived at camp. But the fiery discourse from his players changed the plans.

Team president Stan Kasten broached the topic when addressing the players Tuesday morning. His message was to try to move forward. The first full-squad workout was, in a way, a start to the season, a chance to turn the page. But that won’t be as easy.

“We haven’t heard one thing about the Washington Nationals winning the World Series, the run that they had and who they beat, things like that,” Kershaw said. “I hope at some point we can get to that.”

Right-handers Jimmy Nelson (back) and Dustin May (side) are “days away” from throwing off a mound, Roberts said. The two have participated in workouts and played catch, but neither has thrown a bullpen recently. … Clayton and Ellen Kershaw will hold their eighth annual Ping Pong 4 Purpose on May 7 at Dodger Stadium. The event benefits their charity, Kershaw’s Challenge, which granted over $2 million to various beneficiaries in 2019.