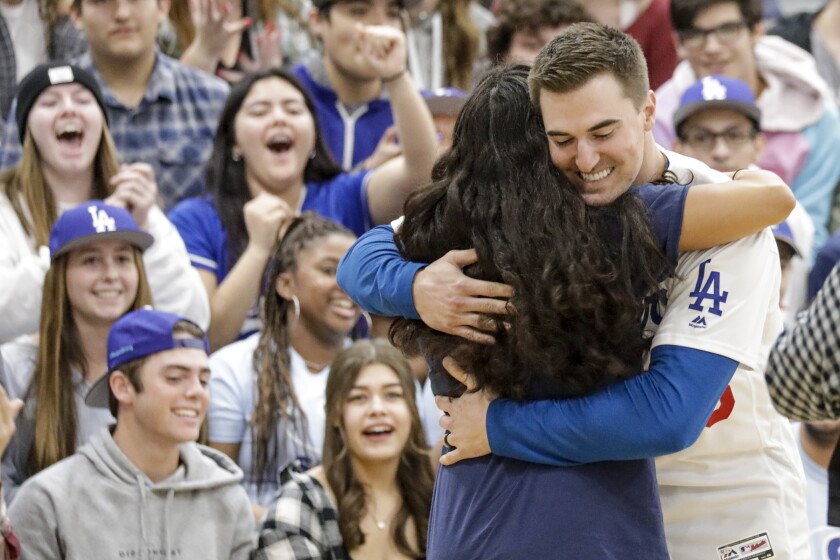 The 21 players were introduced one by one to the stuffed gymnasium Friday. The Saugus High School students, packing the bleachers on both sides, screamed with each name. The teenagers wore Dodgers jerseys and caps. They held phones out to record the pep rally. Two months after tragedy struck, they had something to celebrate together.

The Dodgers continued their annual community outreach tour at Saugus, where a student opened fire in November, killing two students and wounding three others before killing himself. Last year, members of the Dodgers participated in a luncheon with people affected by the massacre at the Borderline Bar and Grill in Thousand Oaks that claimed 12 lives.

“Unfortunately, this is the second year in a row we’ve done an event like this for the community tour, coming after the Borderline shooting,” third baseman Justin Turner said. “Although the reason for being here is not something we want, it has made for a couple really good events. For us to get out in this community tour, visit kids, visit families . . . it’s been a really good experience.”

At Friday’s pep rally, players were divided into four groups, representing each class year, and played games. Pitcher Ross Stripling and a senior finished lyrics from a Britney Spears song to win the first contest. Turner and another senior, wearing Turner’s jersey, won a relay race sliding across the hardwood on a rug. The event ended with the players taking group pictures with freshmen, sophomores, juniors and seniors.

“It was fun to be out here,” Turner said, “and to hopefully create a memory and an experience for these kids to talk about for a long time and take their minds off what happened two months ago.”

After the pep rally, the players rode a bus to the Santa Clarita Sheriff’s Department for lunch with first responders to the shooting. They ate barbecue. Players signed caps and jerseys. It was a more subdued event after the morning’s raucous gathering for a community still grieving.

“We’re definitely appreciative of the Dodgers coming out into this community,” L.A. County Sheriff Alex Villanueva said. “It was hit, obviously, pretty hard by the tragedy. Nothing like some Dodger blue to lift up spirits. Astros be damned.”