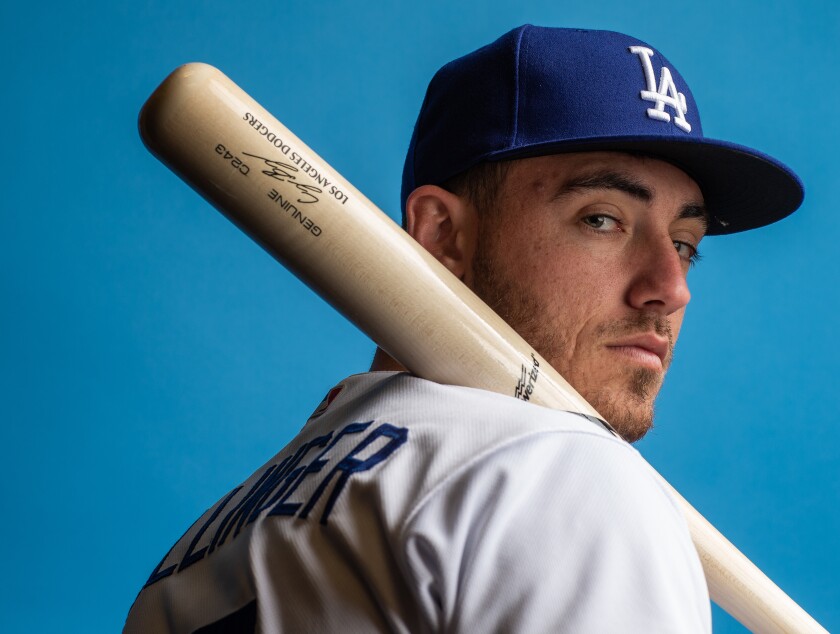 A year ago, Cody Bellinger was embarrassed and angry. He had tumbled from the Dodgers’ freshest rookie sensation in 2017 to a platoon role by the end of the next season. He struggled against left-handed pitchers and couldn’t find answers.

“It was a very humbling experience for personal reasons,” Bellinger said, “and I knew that wasn’t the player that I wanted to be.”

On Thursday, different feelings enveloped the slugger once he was announced as the winner of the National League Most Valuable Player Award surrounded by family and friends. There was elation. There was satisfaction. And when he hugged his father, Clay, there were tears.

“It’s just a dream come true, man,” Bellinger said. “You play the game as a kid, you dream of it, but you literally never think that it’s going to be you in this position.”

Bellinger, 24, became the 12th Dodger to win the MVP award. He is the Dodgers’ first MVP since Clayton Kershaw in 2014 and their first position player to win the award since Kirk Gibson in 1988.

Bellinger made his case for the honor from opening day. He was hearing the MVP chants by the end of his historic April and they continued through the summer’s conclusion. He received them at Dodger Stadium and on the road throughout the country. They were loud and constant, an echoing sound to the season as the Dodgers plowed their way to a franchise record 106 wins with Bellinger as a dynamic force in the middle of their lineup.

The two-time All-Star batted .305 with 47 home runs, 115 runs batted in, 15 stolen bases, and a 1.035 on-base-plus-slugging percentage in 156 games. He was issued a league-leading 21 intentional walks and provided elite defense at three positions — right field, center field, and first base. He also won a Gold Glove as a right fielder and a Silver Slugger Award. He is the fourth player to win MVP, Rookie of the Year, and a Gold Glove before the age of 25, joining Johnny Bench, Fred Lynn and Dustin Pedroia.

“There wasn’t one part of his game he didn’t dominate,” Dodgers manager Dave Roberts said in a statement.

The season did not come without struggles. Bellinger was batting over.400 until May 21, but was a .263 hitter in his final 109 regular-season games as opponents adjusted and pitched around him more frequently though he still posted an All-Star-level .935 OPS. He went four for 19 with seven strikeouts and two walks in the Dodgers’ five playoff games.

“The decision-making in plate discipline got away from him a little bit,” Dodgers president of baseball operations Andrew Friedman said. “And it’s difficult to maintain that discipline when guys are starting to pitch around you even more just nibbling.”

Bellinger cooling off opened the door for Yelich to potentially win the MVP award for the second straight season.

While Yelich was coming off an MVP campaign, simply improving enough to warrant playing every day for the entire year was Bellinger’s focus from the start of last offseason. He worked with Dodgers hitting coaches Robert Van Scoyoc and Brant Brown to rediscover his 2017 form. He pored over video from that season. He was motivated.

“I just needed to find a way to be more consistent with myself,” Bellinger said.

In the end, the work produced baseball’s highest individual honor for a season and some unusual emotions Thursday. Bellinger said he hadn’t cried in years, since his golden retriever, Angel, died. He explained he couldn’t hold it together once he saw his father, a former big leaguer who guided his son to the professional ranks, tear up. It was all so different from just a year ago. He had rediscovered the player he wants to become.

“This award, man, makes me so much hungrier to keep performing,” Bellinger said. “The feeling that you have, why would you ever want to not feel this?”