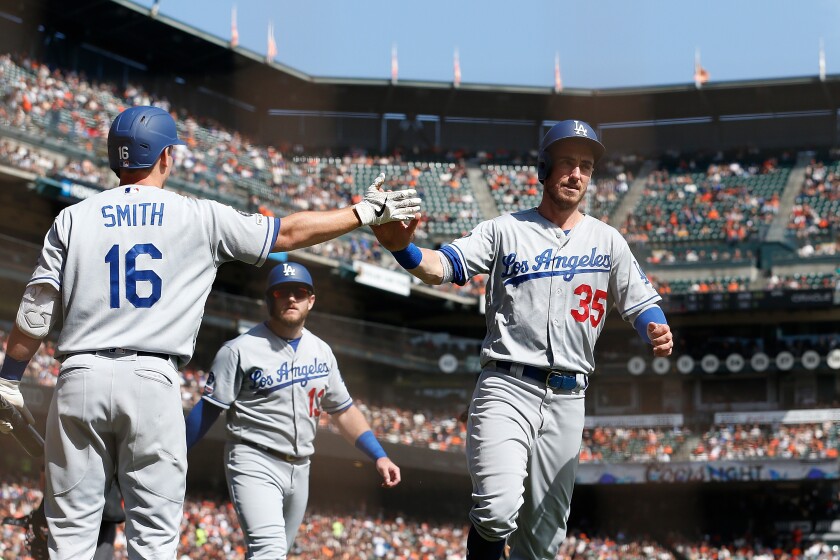 Bellinger, the 2019 National League most valuable player, is expected to seek a salary that would break Chicago Cubs third baseman Kris Bryant’s record for first-year arbitration of $10.85 million, set in 2018.

Muncy is in his first year of arbitration after two standout seasons with the Dodgers in which he hit .256 with a .927 on-base-plus-slugging percentage, 70 homers and 177 RBIs.

The Dodgers have not gone to an arbitration hearing in five years under Andrew Friedman, who took over as president of baseball operations in October 2014. Friedman has used the salary exchange deadline as an arbitrary cutoff for negotiations, a “file-and-trial” approach that has been adopted by most general managers and is intended to secure contract agreements and avoid arbitration.

An arbitration hearing would have no bearing on Bellinger’s status with the Dodgers; under baseball’s collective bargaining agreement, which expires after 2021, Bellinger remains under club control for three more seasons.

But arbitration hearings are adversarial in nature, with players arguing why they deserve a higher salary and teams picking apart the performances of players to prove they’re not worth as much as they’re asking for. The process can leave a sour taste that for some players can linger into free agency.

Bellinger and the Dodgers couldn’t reach agreement on a 2019 deal, and the team renewed the slugger’s contract for $605,000. The left-handed-hitting Bellinger and his agent, Scott Boras, will have plenty of ammunition if they go to an arbitration hearing next month.

Bellinger had a monster first half in 2019, hitting .336 with a 1.124 OPS, 30 homers and 71 RBIs in 88 games. He played superb defense at three positions — right field, center field and first base — and won a Gold Glove Award as an outfielder.

He made what was arguably the best throw of the 2019 season, a majestic 275-foot heave from deep right field to third base to nail Carlos Gomez with the bases to complete a rally killing double play in a 9-5 win over the New York Mets on May 27.

The Dodgers would likely point to a noticeable dip in second-half production, when Bellinger hit .263 with a .917 OPS, 17 homers and 44 RBIs in 66 games, and a quiet postseason, when he hit .211 with zero homers, zero RBIs, three strikeouts and two walks in a five-game NL division series loss to the Washington Nationals.