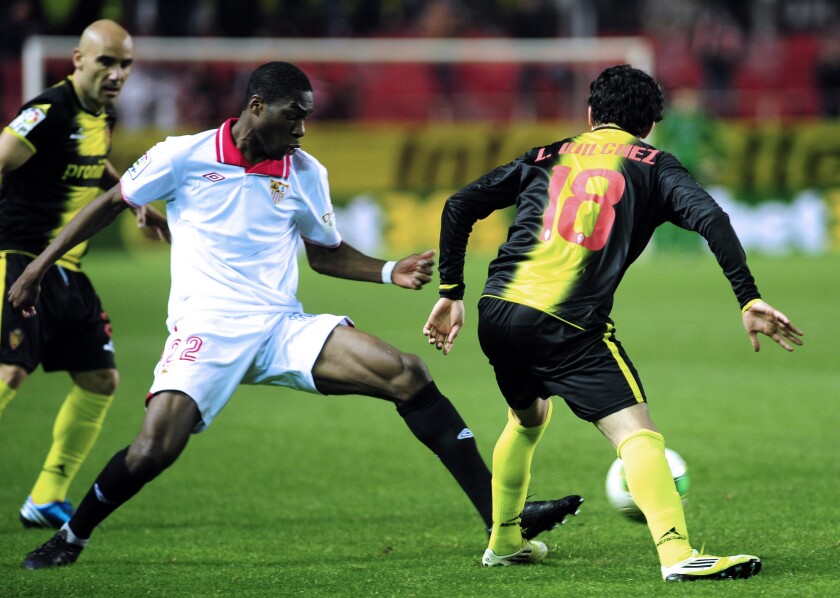 Barcelona and Real Madrid combined to win 14 of the last 15 La Liga titles and, not surprisingly, went into the league’s two-week winter break separated by two points at the top of the table this season.

“I don’t think it interests people to see a competition in which Real Madrid wins every day. Especially if they win 6-0, 7-0, 5-0,” Sanz, a former midfielder and president of Malaga said in Spanish.

Consider that from the viewpoint of Malaga’s long-suffering fans: More than a century after the club’s founding Malaga, now playing in the second division, has yet to win a La Liga championship. Real Madrid and Barcelona have won 59 league titles combined.

“We know in advance that the top two spots are for Madrid and Barcelona. And the third is for Atlético Madrid,” Ramon Rodriguez said.

Rodriguez, better known as Monchi, is sporting director for Sevilla, Spain’s oldest club devoted solely to soccer. It won its only first-division title in 1946.

Clearly parity — or paridad — isn’t a term with which Spanish soccer fans are familiar. And money is a big reason why. Real Madrid’s salary limit of $710 million this season is more than the bottom 12 teams combined. Barcelona’s wage limit is $33 million higher.

So Sevilla, which was playing in the second division and teetering on the verge of bankruptcy when Monchi was the team’s backup goalkeeper 20 years ago, has decided to compete on different terms.

A peerless talent evaluator, Monchi built a stable financial foundation by finding value in players that others had missed. He’s also mastered the transfer market, buying low and selling high. And since developing players is cheaper than buying them, this fall the team announced plans for a $22-million upgrade of its aging academy and training facility.

Perhaps the best example of the Monchi model came in 2002, his second season as sporting director, when he acquired a Brazilian teenager on loan. Seven years later defender Dani Alves transferred to Barcelona for nearly $40 million, a record fee for a right back.

A recent example was Geoffrey Kondogbia, who was plucked from the French second division as a teenager then sent back to the French League 13 months later for $22.8 million, five times what Sevilla paid for him.

Sevilla also learned to measure its success in a different way. Since Real Madrid and Barcelona are too good and too rich to beat in La Liga, Sevilla set its sights elsewhere: Although it has finished as high as fourth in the league just once in the last nine years, it has won three of the last six Europa League titles.

“It is the competition that changed our lives,” Sevilla president José Castro responded in an email interview. “You can have less resources, but if you work hard, you get results.

“We are aware of our limitations. Our shareholders aren’t huge investors from abroad. This isn’t Paris, London or Rome. We accept this, but we have shown with … a risky policy of selling players and buying well, we can compete against Europe’s elite and beat them.”

Sevilla isn’t the only team that has managed to achieve abroad what it hasn’t been able to do at home. Paris Saint-Germain has won six of France’s last seven Ligue 1 titles, but Marseille has made more continental competition finals than PSG over that span.

Liverpool, which hasn’t won a league title in the Premier League era, has played in the last two Champions League finals, winning a year ago over Tottenham, another team that has won more European titles than Premier League trophies.

“Champions League is, by far, the best club competition in the world,” Bayern Munich president Karl-Heinz Rummenigge said. The most unpredictable, too, partly because the outcome doesn’t seem preordained, as it appears to be in most of Europe’s major leagues. That’s what makes it so compelling.

Domestic titles in Italy, Germany, France, Portugal and Spain have been won by only eight clubs in the last seven seasons — domination that continues this season.

Juventus, which has won eight consecutive Serie A championships, went into Italy’s winter break tied for the league’s best record. PSG is comfortably ahead in France. Benfica and Porto, who have won every Portuguese title since 2003, are again 1-2 in the standings while in Germany, seven-time defending champion Bayern Munich is within four points of the lead.

While Rummenigge’s team has been one of those doing the dominating, the Bayern boss agrees with Sanz when he says a league season with no suspense “isn’t so attractive.”

Fixing that is “up to the other teams,” Rummenigge said. “It’s our task to do it the eighth time in a row. And we will see the outcome.”

Sevilla accepted that challenge in Spain. Its blueprint is one worth copying.