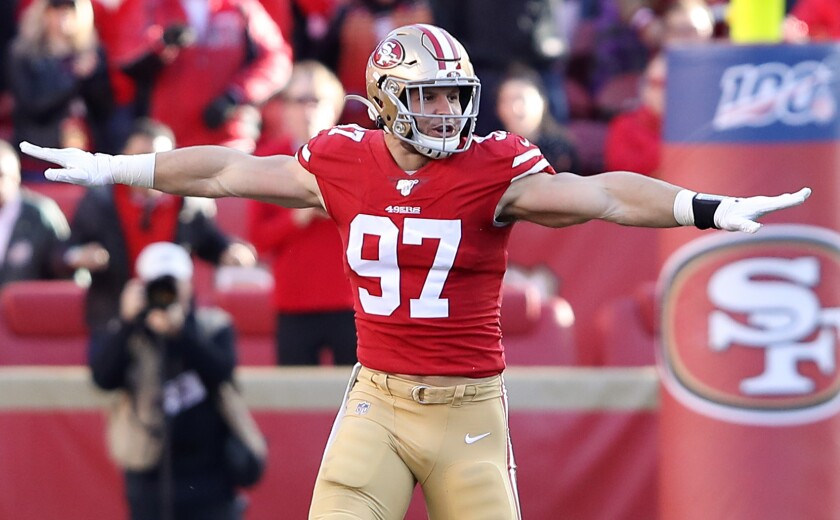 He had two sacks that together drove the opposition backward 15 yards.

Later, he tackled a streaking wideout after chasing him down on a 16-yard gain.

When he wasn’t making plays deep in either the offensive or defensive backfield, Nick Bosa was smothering a running back at the line of scrimmage and then, on the very next snap, blanketing that same running back and breaking up a pass.

The latter was particularly notable in that Bosa is a defensive end. And all of his production Saturday was notable since this is a rookie who never had appeared in an NFL postseason game.

“It’s just a lot of God-given ability and a lot of hard work,” San Francisco teammate Azeez Al-Shaair said. “He has that pass-rush ability in his blood. He was born with a blueprint laid out before him and he’s followed it perfectly.”

Each was a first-round draft pick, Nick taken with the No. 2 overall selection in April.

“None of what he did surprised me,” said Joey, who watched the 49ers’ 27-10 divisional round playoff victory over Minnesota from a suite inside Levi’s Stadium. “It didn’t surprise me even a little bit.”

Before the season, Joey said his little brother was so good that he might lead the league in sacks. That didn’t happen, but so much else did.

Nick produced a rookie year that included nine sacks, 16 other hits on the quarterback, two fumble recoveries and an interception. He was chosen to start the Pro Bowl.

Then, in his playoff debut, he helped limit the formerly trending Vikings to seven first downs, 21 rushing yards and zero thought of pulling an upset.

“When you put a great athlete in a guy that big, with such great gut instincts, he’s bound to cause disruption,” said fellow San Francisco rookie Dre Greenlaw. “He’s just hard to handle. All credit to him and his genes and all that good stuff.”

Bosa was so impactful Saturday that he commanded a packed house while lying flat on his back, breathing life into an entire stadium as, ironically, he had no breath of his own.

Early in the fourth quarter, he had the wind knocked out of him while sacking Kirk Cousins.

At the urging of the medical personnel surrounding him, Bosa remained down, long enough to draw both concern and encouragement — the 49ers fans moved to begin chanting his name.

After several seconds, he sprang to life, pointed his left index finger toward the sky, bobbed his head repeatedly and exited the field with the sort of swagger rarely associated with someone who, moments earlier, had been a gasping, wheezing mess.

“I was just trying to get my breath back initially,” Bosa would explain later. “They told me to stay down for a second. Then I heard the chants. I had to get up.”

San Francisco prevented Minnesota from rushing for a first down. Twelve times the Vikings faced third down and 10 times they failed to convert. The 49ers allowed only one play to go for more than 18 yards.

The San Francisco front sacked Cousins six times, each coming from a player who was a first-round draft pick. Along with Bosa, the others selected by the 49ers included DeForest Buckner, Arik Armstead and Solomon Thomas.

Ford had the other sack. A 2018 Pro Bowler, he was acquired in March in a trade with Kansas City. Upon completion of the deal, Ford announced he was “gonna be like a Ferrari but with an 18-wheeler’s force.”

The effort upfront was overwhelming to the point where starting middle linebacker Fred Warner said afterward he didn’t feel as if he had played in a game.

This is what awaits Aaron Rodgers and the Green Bay Packers on Sunday at Levi’s Stadium in the NFC title game.

“You kind of just let them off the leash …” 49ers tight end George Kittle said of his team’s defensive line. “We had guys rushing the passer from all angles. It’s kind of tough to be a quarterback, I guess.”

Bosa’s time in the Bay Area began with glaring hype but also with a noticeable limp. After missing most of his final season at Ohio State because of a core muscle injury, he was slowed in the offseason by a hamstring problem.

Then, in early August, he suffered a significant ankle sprain that kept him out of the preseason.

Even amid all that spurting, Bosa’s potential couldn’t have been more obvious to his new teammates, even the most veteran of them.

“There’s usually a learning curve for rookies coming into the NFL,” 13-year left tackle Joe Staley said. “They figure out pretty early on that they can’t get by on just athleticism. They need to use the proper techniques and be disciplined.

“He showed up already understanding that. It was pretty exciting but also a little confusing. I was like, ‘Uh, oh. Maybe I’m losing it a little bit.’ Then you see him go against everybody else and makes them look silly too.”

Up next is a future Hall of Fame quarterback and shot to reach the Super Bowl.

In 101 combined NFL games, the Bosas — John and his two boys — never have been this far.

“It is a little crazy to see him in this position in just his first year,” Joey said. “The NFL can be so up and down. This thing is pretty real all of a sudden. Just one more win.”

From following a blueprint to blazing a trail.