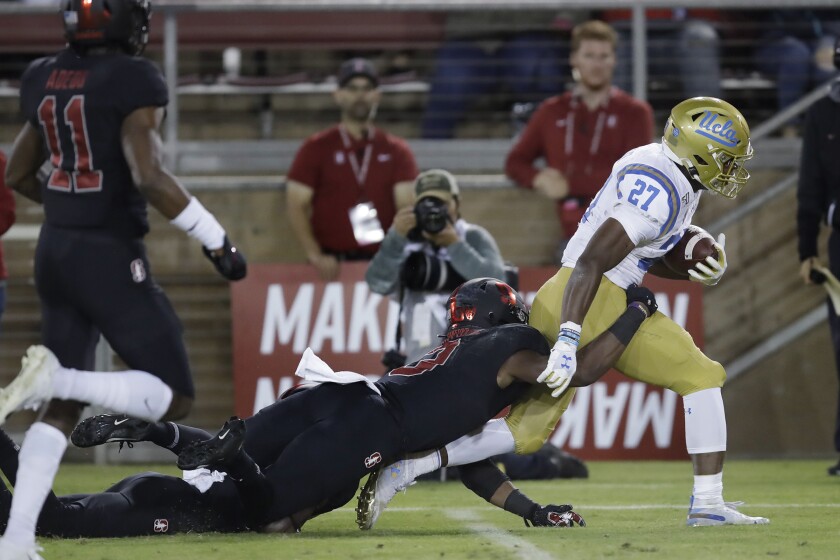 “We are the mighty Bruins, the best team in the west! We’re marching on to victory, to conquer all the rest!”

The UCLA Bruins savored the soundtrack to an unexpectedly sweet victory Thursday night, made all the more satisfying by the circumstances. They’ll never have to hear about “Stanford” and “The Streak” again.

It took the Cardinal starting a third-string quarterback and three freshmen on the offensive line, but UCLA’s 34-16 victory at Stanford Stadium won’t come with any asterisks.

“That’s something you’ll remember for the rest of your football career, winning games like that,” Bruins tailback Joshua Kelley saidafter his team snapped an11-game losing streak against the Cardinal that was their longest against any team in their 100 years of football. It was UCLA’s first victory in the series since 2008 and will spare a future generation of sportswriters from having to rehash quarterback Kevin Craft’s heroics that day.

Quarterback Dorian Thompson-Robinson became the primary protagonist in the Bruins’ joyous sequel, returning from a leg injury suffered late last month to throw for two touchdown passes and run for one score.

“My boys are happy and so am I,” said Thompson-Robinson, adding he didn’t know about the streak until after the game or that he was starting until shortly before game time.

UCLA (2-5 overall, 2-2 Pac-12 Conference) was also buoyed by an unusually stout defense that held Stanford (3-4, 2-3) to a season-low 198 yards and logged a season-high seven sacks, nearly matching its previous season total of nine.

As the UCLA band, which made the trip, serenaded the team in the final minutes, players celebrated with graduate assistant Jerry Neuheisel and others who had endured more than a decade of defeat against their intrastate nemesis.

“For those guys to be like, ‘Finally,’ even the A.D. [Dan Guerrero],” UCLA linebacker Josh Woods said, “it’s just awesome to have that camaraderie as Bruins.”

It was a victory that also lessened the heat on Bruins coach Chip Kelly. He’ll always have Stanford and a moment that meant so much to so many.

Universally panned as a failure through his first 11/2 seasons at the school, Kelly found a momentary reprieve when his team made some history it won’t have to look back at squeamishly. Not that Kelly seemed to care about the significance of the victory.

The Bruins capitalized on the presence of Stanford’s Jack West, a sophomore who was making his first collegiate start with quarterbacks K.J. Costello and Davis Mills sidelined by injuries.

West completed only 15 of 32 passes for 143 yards and the Cardinal compounded his inefficiency by rushing for just 55 yards, averaging 1.8 yards a carry.

Stanford’s offensive struggles came across the board. The Cardinal lost a fumble, completed five of 16 third downs and scored only one offensive touchdown, on Cameron Scarlett’s six-yard run with 2 minutes 50 seconds left.

Stanford’s other touchdown came courtesy of a blocked punt late in the first quarter that Tremayne Brycen fell on in the end zone.

UCLA led only 14-10 after that blunder but began to pull away with 51/2 minutes left in the second quarter when Thompson-Robinson cut outside for a one-yard touchdown run. Receiver Kyle Philips had scored the Bruins’ first two touchdowns, on catches of 19 and three yards.

The Bruins could feel relatively comfortable about their chances to end the streak after kicker J.J. Molson extended their advantage to 27-10 in the third quarter with 43- and 49-yard field goals.

Thompson-Robinson completed 21 of 34 passes for 192 yards and showed early in the game that he was recovered from his leg injury when he sprinted away from defenders for a 39-yard gain. The quarterback finished the game with 66 yards rushing even though he was sacked three times.

Kelley gained 176 yards in 18 carries, including a 54-yard touchdown run midway through the fourth quarter and a 53-yard run in the second quarter that put the ball at the one-yard line and set up Thompson-Robinson’s touchdown run.

Given UCLA’s recentfutility against Stanford, this might have qualified as the signature victory of the Kelly era after his record with the Bruins improved to 5-14. The other win in contention would be UCLA’s triumph over USC last season.

“This was our last rodeo,” Kelley said, “so saying that we were the team that beat the streak, that’s a great feeling for sure.”