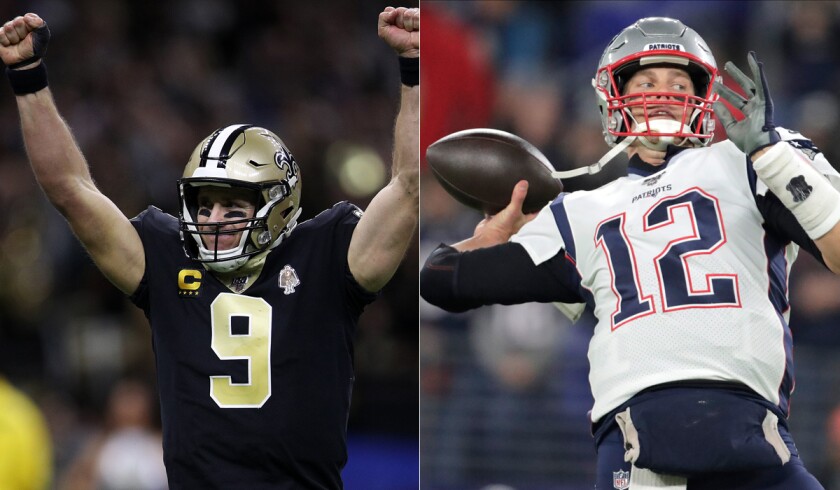 Drew Brees is the NFL record holder for most touchdown passes. The New Orleans Saints quarterback threw for four scores Monday night to pass Peyton Manning on the all-time list.

But has Brees really thrown more touchdown passes than anyone in NFL history? Nope, and it’s not even close.

The official record takes only regular-season games into account. Brees is now first on that list with 541, followed by the retired Manning (539) and New England Patriots quarterback Tom Brady (538). The retired Brett Favre is a distant fourth at 508.

Brees and Brady will be fighting for the top spot for the rest of their careers. But if playoff victories were counted in that tally, the battle would have been long over.

Brady has played in 40 postseason games, more than anyone in league history. Manning is the next quarterback on that list and tied for fifth overall with 27 playoff appearances. Brees is far behind with 15.

Not surprisingly, Brady is way ahead of everyone with 73 postseason touchdown passes. Joe Montana is second with 45, followed by Favre (44), Manning (40), Aaron Rodgers (36) and Brees (33).

With regular-season and playoff stats combined, Brady passed Manning a little more than a year ago during a game against the Miami Dolphins. As it stands right now, Brady has 611 total touchdowns, followed by Manning (579), Brees (574) and Favre (552).

But since postseason numbers are not included on the all-time list, Brady still trails Brees and Manning — at least for now.

“Congrats drew!! Couldn’t be more deserving,” Brady tweeted Monday night. “Passing Peyton in anything is an incredible achievement and your records will be tough to beat!”

Congrats drew!! Couldn’t be more deserving. Passing Peyton in anything is an incredible achievement and your records will be tough to beat! But it’s worth trying 😉

“But,” he added with a winking emoji, “it’s worth trying.”