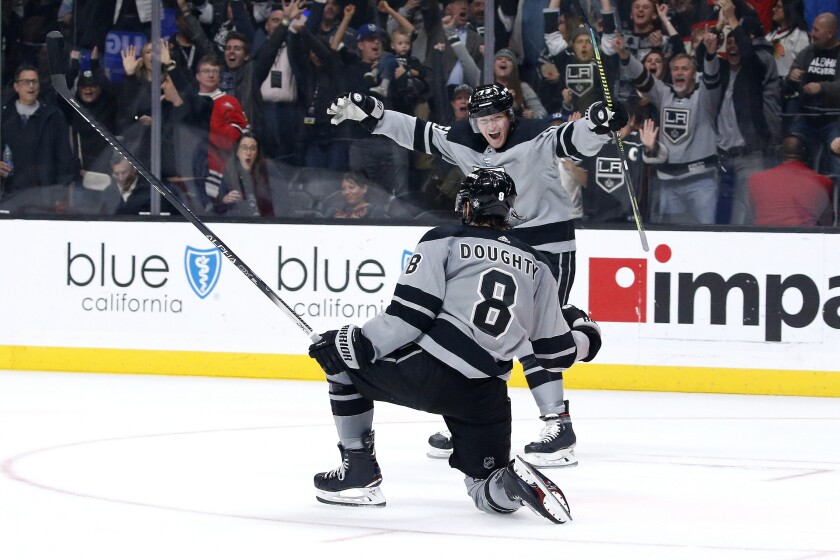 Drew Doughty delivers for Kings, who earn an overtime win over Blackhawks

Drew Doughty is a man of absolutes, an evaluator of extremes.

The boisterous Kings defenseman doesn’t often straddle the line or sit on the fence. Nuance isn’t his niche. Bright, brash and sometimes brazen flashes of brilliance are what he does best.

“You count on players like that,” Kings coach Todd McLellan said, “to provide big moments.”

The best version of Doughty delivered on Saturday night, when he scored with 16 seconds left in overtime to give the Kings a 4-3 win over the Chicago Blackhawks at Staples Center.

“I haven’t been too happy with how I’ve been playing lately,” Doughty said after the game, turning a simple question about his game-winner — a loose puck he poked into the net — into a referendum on his own play. “I wanted to contribute and do something good.”

Quietly, the former Norris Trophy winner as the league’s best defenseman in 2015-16 had been far from top form this season. Despite being second on the team in points (four goals, six assists), he began Saturday with a minus-seven rating, the second-worst plus/minus rating on the team and dead last in the advanced puck possession metric, known as Corsi For percentage.

Too often, the Kings have bled chances and goals during Doughty’s shifts, and he knew it.

Indeed, despite some promising indicators, the Kings (5-9-0) haven’t strung together wins early this season. Doughty hopes his own improved play might tilt those scales and give the Kings the added oomph to turn this rebuilding season into something more.

That’s precisely what he did in overtime on Saturday night. After passing the puck to Tyler Toffoli on a two-on-one break, Doughty circled behind the net, watched Toffoli’s shot trickle behind Blackhawks goalie Corey Crawford, and snuck behind the netminder to score and snap the Kings’ four-game losing streak.

“He saw the loose puck,” McLellan said. “Was smart enough and had enough poise to break his skating down and put it in.”

For most of regulation, the Kings dominated the Blackhawks (3-6-2). They not only outshot Chicago 49-27, but had fewer giveaways, more takeaways and better chances. Overtime shouldn’t have been needed.

But the Kings twice squandered leads. An early two-goal edge — courtesy of well-placed shots by Kyle Clifford and Matt Roy — was erased before the first intermission. A go-ahead goal by the Kings’ Michael Amadio with less than eight minutes left in the third period was answered by Jonathan Toews with 1:19 to go.

Though McLellan praised Doughty’s improvements on the power play and in the defensive zone during regulation, the defenseman’s stats told a different story. During five-on-five play, the Kings were outshot nine to seven with Doughty on the ice and surrendered five “high-danger chances,” according to NaturalStatTrick.com.

Doughty acknowledged that picking up McLellan’s new aggressive system — which has him playing more a “rover” role in the middle of the ice — has been somewhat of a struggle.

“It’s a different process, but it’s something we’re all happy about,” Doughty said. “You can see how dominant we can be if we execute the system.”

Within the free-flowing pace of overtime, however, Doughty’s instinctual ability to take over a game returned with a bang. Such skill is the reason he still personally targets Norris Trophy-caliber play and why, in his estimation, the Kings have enough talent to perhaps be a potential playoff contender.

“I want to be better,” Doughty said. “I want to be that defenseman that’s up for the Norris again one day. I want our team to be successful again. … That’s the main goal, having a better season this year and hopefully making the playoffs. That’s what we want to get back to.”

Maybe as much as anyone on the roster, Doughty has the ability to help them get there — to turn celebratory snapshots such as Saturday night, when he slid across the ice on one knee while pumping a fist, into a more common occurrence.

“He’s pushing himself to be that every night, and we’re pushing him too,” McLellan said. “He’s very hard on himself, he’s very self-critical. I think that’s what the best individuals always do.”

At one point, McLellan paused and grinned.

“Can you imagine life without him?”