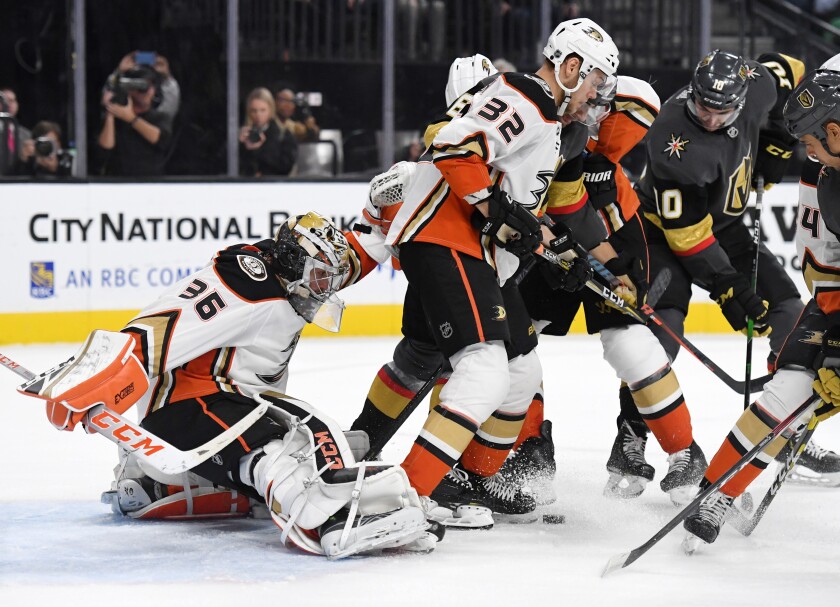 Roy, making his first appearance as a member of the Golden Knights, showed off his blazing speed when he split two Anaheim defenders and slipped a shot through Ducks goaltender John Gibson’s pads for what turned out to be the game-winning goal.

Mark Stone, Ryan Reaves, William Karlsson and Paul Stastny also scored for Vegas, which moved ahead of the Ducks and into sole possession of second place in the Pacific Division.

The Golden Knights have 16 points, one point behind first-place Edmonton. Anaheim has 14 points.

Marc-Andre Fleury had a relatively quiet night, finishing with 13 saves. Fleury improved to 14-4 all-time against Anaheim.

The 15 shots on goal were the fewest Vegas has allowed this season.

Ryan Getzlaf and Adam Henrique scored for the Ducks, while Gibson dropped to 1-7-1 against Vegas after allowing five goals. Gibson, who made 44 saves, has started every game for Anaheim against the Golden Knights since Vegas entered the league in 2017.

Gibson entered the game tied for the highest career save percentage (.922) among all-time NHL goaltenders with at least 200 games played.

The Ducks appeared to have carried their momentum from Saturday’s 5-2 win at Colorado, as Getzlaf opened the scoring when he took a pass from Max Comtois and slipped it through Fleury’s pads, making it 1-0 just 4:12 into the game.

The lead didn’t last. Stone was credited with tying the game 34 seconds later, when his wrist shot off the post ended up on the end of Anaheim defenseman Cam Fowler’s stick. Fowler accidentally knocked the puck into his own net to tie the game at 1-1.

Reaves scored off a centering pass from Carrier during a delayed penalty. Roy closed out the period with his first NHL goal to push Vegas’ lead to 3-1.

The onslaught of shots at Gibson continued in the second period. Karlsson made it 4-1 with a power-play goal midway through the period.

Stastny put the game out of reach early in the third when he netted Vegas’ second power-play goal. He took a pass from Max Pacioretty and netted his fifth goal of the season.

Henrique tacked on Anaheim’s final goal with a little more than 13 minutes left in the game.