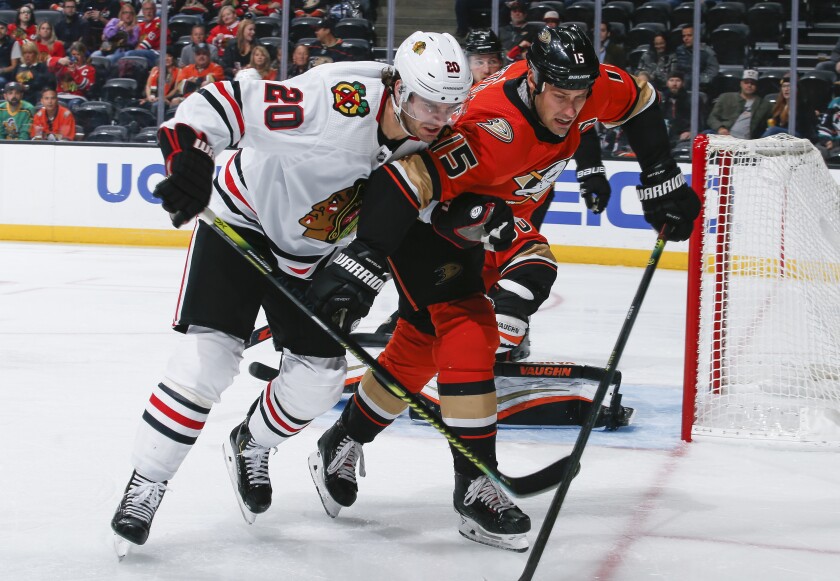 Patrick Kane scored 24 second into overtime off a pass from Jonathan Toews and the Chicago Blackhawks beat the Ducks 3-2 Sunday night.

Toews, stopped in traffic shortly after overtime began, spun around and slipped a cross-ice pass to Kane, who lifted the puck over the shoulder of Miller for the winner.

Blackhawks goalie Robin Lehner made 36 saves in the victory as Chicago won for just the second time in eight games. The Blackhawks also became the last Western Conference team to win a game on the road.

Gudbranson had a second-period goal and Ritchie tied the game 2-2 at the 6:17 mark of the third period on a power-play goal, with an assist from Steel. Getzlaf had an assist.

Boqvist, who made his NHL debut Saturday night against the Los Angeles Kings, scored through traffic in front of the goal at 9:21 of the first period on a shot that hit off the right post and deflected into the net.

It was just the second loss at home in eight games for the Ducks, who entered with three victories in their last four games.

Just over six minutes after Boqvist scored for the first time, DeBrincat took a cross-ice pass from Kane and scored his fourth of the season on a deflection off Miller’s right pad.

Getzlaf’s milestone game came two days after he scored the winner in overtime against the Vancouver Canucks.