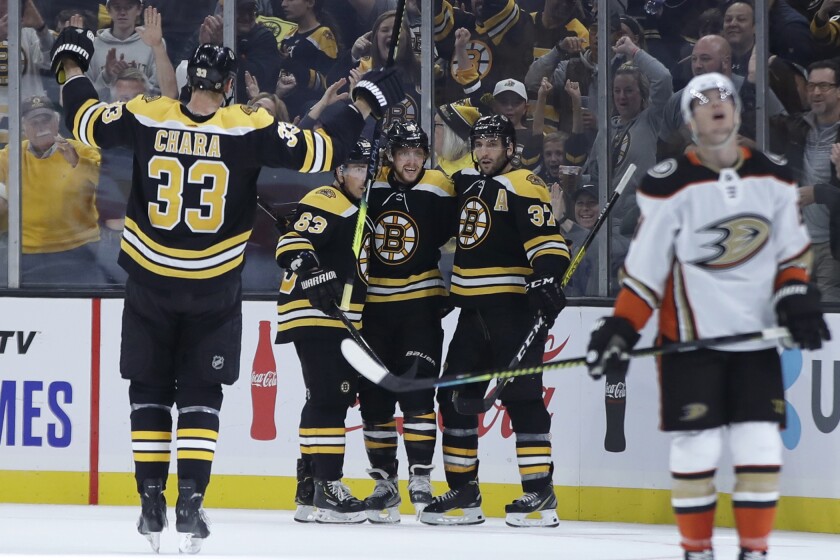 Ducks fall to Bruins, who get four goals from David Pastrnak

David Pastrnak scored a career-high four goals for his fifth career hat trick Monday, leading the Boston Bruins to a 4-2 victory over the Ducks.

Jaroslav Halak stopped 30 shots and Brad Marchand added two assists for the Bruins, the Stanley Cup runner-up off to a 5-1 start.

Rickard Rakell and Adam Henrique scored for the Ducks, and John Gibson made 19 saves. Anaheim has lost two of three after winning its first three games this season.

Pastrnak completed his hat trick with an unassisted goal off a face-off. He stole the puck from defenseman Josh Mason and slipped a wrist shot between John Gibson’s pads 2:20 into the third period to make it 3-1, prompting fans to throw hats on the ice.

The 23-year-old forward scored 2:04 later off a nice feed from Marchand, who sent a pass from the left circle to Pastrnak. He was at the edge of the far post, where he redirected the puck into the net.

Eight seconds into Michael Del Zotto’s penalty for slashing, the Bruins made it 1-0 when Patrice Bergeron sent a backhand pass from the slot to Pastrnak, who one-timed a shot past Gibson 4:18 into the game.

Boston made it 2-0 just a little less than a minute after Halak made the second of two stellar stops midway into the second period when Marchand stole the puck from defenseman Hampus Lindholm and fed it to Pastrnak, who was coming off the bench. The winger beat Gibson with a wrister from the right circle at 11:38.

Halak stopped two clean break-ins to keep the Ducks off the scoreboard until late in the period. On the first, Ondrej Kase cut in and the goalie made a blocker save on a backhander. Max Jones skated in alone from the right circle on the second chance, getting off a backhander while he was being hooked by defenseman Steven Kampfer.

Rakell beat Halak with a wrister glove side, slicing it to 2-1 with 2:08 left in the second.