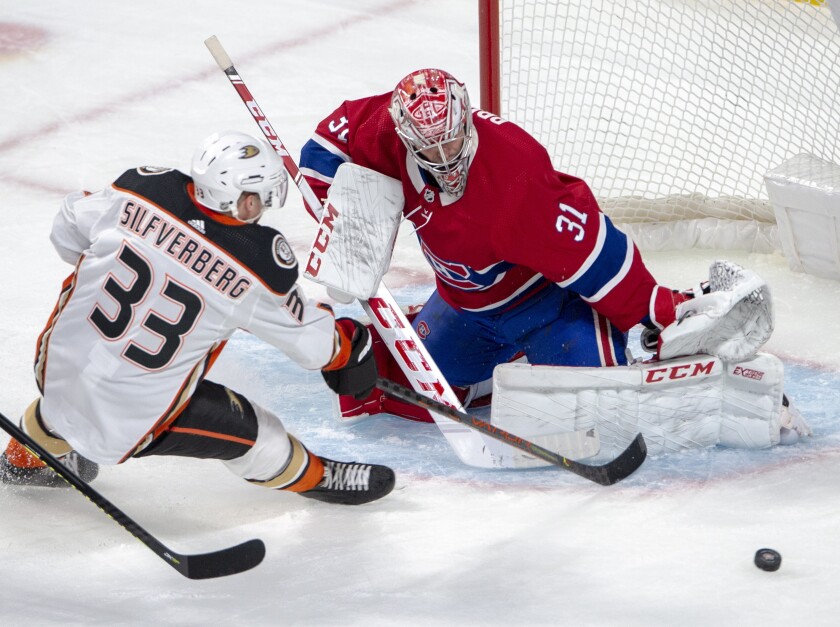 Ducks fall to Canadiens in overtime 3-2

Jeff Petry scored 25 seconds into overtime to give the Montreal Canadiens a 3-2 victory over the Ducks on Thursday night.

Nick Suzuki and Brendan Gallagher scored in regulation for the Canadiens, who have won six of their last eight games. Carey Price made 35 saves and improved to 4-7-1 in his career against Anaheim.

In overtime, Petry carried the puck all the way from his own zone and the defenseman beat Gibson with a wrist shot on the blocker side for his eighth of the season.

Canadiens captain Shea Weber missed his first game of the season because of a lower-body injury. Christian Folin took his spot in the lineup.

Anaheim was outshooting Montreal 13-5 in the first when Nick Ritchie took an interference penalty. The Canadiens took advantage of the extra skater when Suzuki, using Gallagher as a screen, beat Gibson at 17:18 for his 11th of the season.

The Canadiens were caught watching the puck on Anaheim’s equalizer at 9:53 of the second. Surrounded by four Montreal players in the slot, Silfverberg got his stick on Rickard Rakell’s pass from behind the net and roofed a shot on Price.

Gallagher made it 2-1 for the Canadiens with a five-hole goal from the slot at 13:16 on a pass from Ilya Kovalchuk that eluded three Ducks players. Gallagher has three goals in five games since returning from a head injury.

Montreal failed to clear its own zone and Grant netted the equalizer 2:16 into the third, a bouncing shot that sneaked underneath Price’s right pad.

With the Canadiens on a power play, Gibson kept his team in it with an incredible glove save on Joel Armia on the doorstep midway through the third. That stop came seconds after Tomas Tatar rifled a shot off the post.

Price did the same late in the third when he stacked the pads and robbed Silfverberg of what appeared to be a sure goal with two minutes on the clock to force overtime.

The Canadiens have been fighting a bad flu bug this week, with several players under the weather. Price and Victor Mete were back in the lineup after missing Tuesday’s 5-4 shootout win in New Jersey. Rookie Ryan Poehling did not dress. ... Canadiens forward Jake Evans made his NHL debut. The 23-year-old had two shots on net, including a breakaway chance in the first. ... Rakell extended his point streak to four games. ... Anaheim’s Nicolas Deslauriers faced his former team for the first time.

Ducks: at Toronto on Friday night.