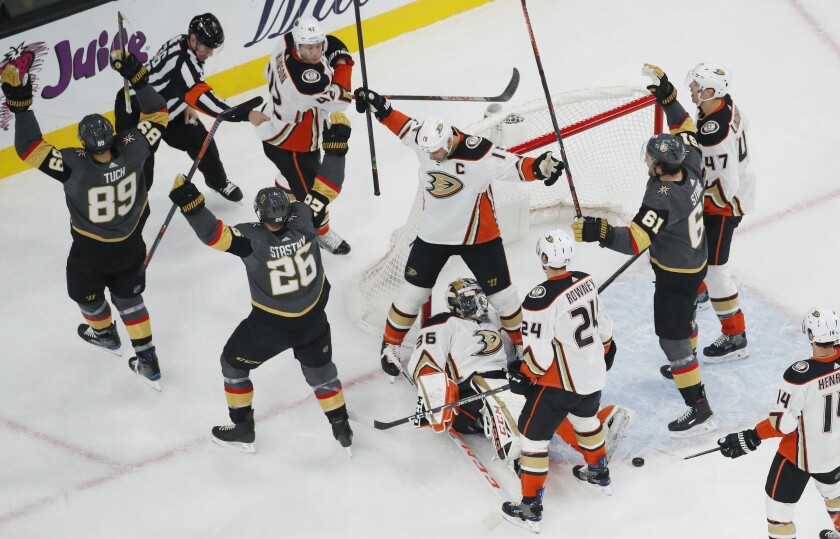 Ducks get run over by Golden Knights 5-2

Vegas coach Gerard Gallant has been insistent all season that his team would eventually find its winning form.

Heading into 2020, the Golden Knights look like the team that was favored to contend in the Western Conference prior to the season.

Jonathan Marchessault scored twice, Marc-Andre Fleury made 26 saves, and the Golden Knights defeated the Anaheim Ducks 5-2 on Tuesday to extend their run to 13-6-3 since Nov. 17.

“We’re a real good hockey team, I know that,” Gallant said. “We don’t play great hockey every night, like every other hockey team in the National Hockey League, but lately we’ve played real good hockey. Our guys know their roles, they try and do the most nights and tonight was a real good game again.”

Vegas has scored 71 goals during its 22-game run.

“We’ve always been a fast team, but I think we’re able to play fast as a five-man unit being able to move that puck past defensemen, getting the puck deep, forechecking, causing turnovers,” Tuch said. “I wouldn’t say that we’re a huge transition team, but when we cause turnovers in the offensive zone we’re an attack-style team. We’re just trying to do the little things right and start to build more and more chemistry every game.”

The Golden Knights, who remained in first place in the Pacific Division, closed out the month with a 9-4-2 mark and improved to 29-8-6 all time in December.

“Even early in the year, we were playing well but we were losing; we didn’t have puck luck,” Gallant said. “We’re working hard and we’re getting puck luck. I don’t think we’ve had a bad season; I’d like our record to be a little better than what it is now, but we’ve played good hockey for most of the year.”

It’s led to a long climb from sixth place in the eight-team Pacific, to the top of the division.

“We’re playing some good hockey right now and we worked hard to be there and we’re gonna work hard to stay there,” Marchessault said.

Mark Stone, Alex Tuch and Reilly Smith also scored for the Golden Knights. Fleury, who was selected to play in his fifth All-Star Game, also earned his 455th win to take over sole possession of sixth place all time, passing Curtis Joseph.

Korbinian Holzer and Jakob Silfverberg scored for the Ducks and John Gibson made 38 saves while dropping to 2-8-1 against Vegas.

The Ducks continued to struggle on the road, where they’re 6-12-2 this season. They’ve also struggled against Vegas since it entered the league for the 2017-18 season, going 2-8-1 against the Golden Knights, including a 1-3-1 mark at T-Mobile Arena.

“It’s frustrating when we go out and we’re not ready to play,” said Gibson, who came into the game tied for the sixth-highest career save percentage (.920) among NHL goaltenders with at least 200 games played. “It’s a privilege to play in the National Hockey League and it feels like some guys are taking it for granted.”

That may have been evident with the game tied 1-1, and time running out late in the first period.

After a scrum in front of Gibson, the puck squirted loose behind him and Anaheim’s Josh Manson tapped the puck straight over the goal line, rather than clearing it, giving the Golden Knights a 2-1 lead and Tuch his sixth goal of the season.

And while Gibson did his best to keep Anaheim in the game, turnovers hurt the Ducks.

Down 1-0, the one-two scoring punch of Stone and Max Pacioretty once again sparked the Golden Knights. After Pacioretty forced Erik Gudbranson to turn it over in front of the net, Stone skated in and one-timed a perfect wrist shot over Gibson’s glove. Stone and Pacioretty have been on the ice for 45 of Vegas’ 128 goals this season — a 35 percent clip.

Smith later extended the lead late when he gathered a loose puck from a turnover he created, skated around Ducks defenseman Hampus Lindholm, and lifted a backhand perfectly to make it 3-1.

Marchessault scored his first goal on a penalty shot. After Silfverberg cut the lead to two, Marchessault netted his second goal with Gibson pulled.