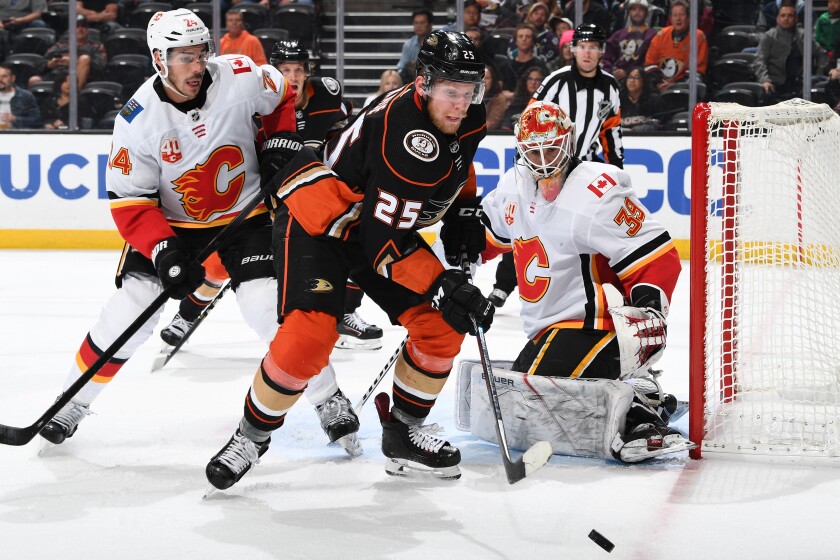 For the first time this season, fans filed out of Honda Center silently.

They had been anything but for most of the final minutes Sunday, roaring as the Ducks put the Calgary Flames’ net under siege in search of a game-tying goal. Over the final 20 minutes, the Ducks fired 11 shots on net. They created chances off of rushes, on the power-play and with the goalie pulled.

But, for the first time in five home games, they couldn’t break through. After Flames forward Mikael Backlund buried a go-ahead goal with 11:03 remaining, goalie Cam Talbot shut the door. Despite dominating down the stretch, the Ducks lost 2-1.

“I liked our resiliency,” coach Dallas Eakins said. “I thought we had numerous chances to not only tie it but probably go ahead by a couple. We just couldn’t get it in the net.”

Leading up to the Flames’ eventual winning goal, the Ducks had seemed to be on the verge of a go-ahead tally of their own. One mistake, however, proved costly.

Just shy of the nine-minute mark, Ducks forward Sam Steel had a bouncing puck poked off his stick in the neutral zone, sending the Flames on a two-on-one chance the other way. Matthew Tkachuk fed Backlund with a cross-ice pass. Ducks goalie John Gibson had little chance to stop the puck while attempting diving glove save.

“We just want to bat that thing ahead,” Eakins said of the Ducks’ neutral zone turnover. “We got caught up in both trying to make a play and being a little too aggressive with the jump. But that’s going to happen right now. We’re encouraging our guys to make plays, encouraging our guys to get up in the play. That’s where we’ll have to find a balance.”

The loss dropped the Ducks to 6-3-0, still good enough to keep them in second place in the Pacific Division through the opening three weeks.

“Tough not getting the points we wanted tonight,” forward Jakob Silfverberg said. “But definitely a lot of positives out of the game.”

After falling behind in the third, the Ducks turned up the pressure. Talbot didn’t crack.

During a power-play with less than 10 minutes remaining, Max Comtois couldn’t bury back-to-back tries from close range. After play returned to even-strength, Nick Ritchie also was robbed trying to one-time a back-door pass.

Their last gasp came with 11 seconds left, after Rickard Rakell slipped a centering feed to Ritchie. Again, Talbot turned the puck aside. In all, the Flames goaltender stopped 29 of the 30 shots he faced, becoming the second netminder this year to hold the Ducks to one goal.

“I thought we had a lot of good looks,” defenseman Josh Manson said. “It just somehow hit the goalie, or maybe a little bit missed the net or hit the post.”

The Ducks scored first Sunday night, taking the lead 12 seconds into the second period. After a quick passing sequence through the neutral zone, defenseman Hampus Lindholm received the puck near the top of the circles. To his left, Silfverberg was streaking down the wing. Lindholm slid him a backhanded feed and Silfverberg buried a snapshot past Talbot’s blocker.

The Ducks came close to doubling their lead later in the second, including a Ritchie shot that smacked the post. But less than five minutes before the second intermission, Flames defenseman Michael Stone blasted a slap shot from the point into the upper corner. Gibson, who made 27 saves in his third loss of the season, was screened in front and barely flinched.

“It was one of those games that felt like it could have gone either way,” defenseman Cam Fowler said. “A couple of the mistakes that we had ended up in the back of our net, and their goaltender made some huge saves at the end.”