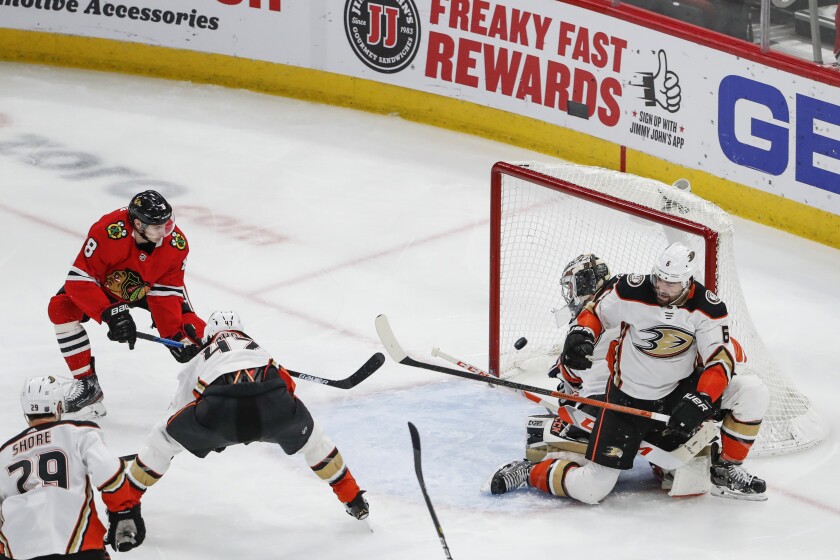 Dominik Kubalik scored two goals, Jonathan Toews had a goal and an assist, and the Chicago Blackhawks beat the Ducks 4-2 on Saturday night.

Kubalik has scored at least a goal in four straight games and has 16 goals for the season, tying him with Buffalo’s Victor Olofsson for the NHL rookie lead. The first two-goal game of his career gave the Chicago forward eight points in his last five games.

Olli Maatta also scored for the Blackhawks, who rebounded after two consecutive losses to finish a four-game homestand 2-2-0.

Max Jones and Rickard Rakell scored for the last-place Ducks, who have lost three in a row and six of seven (1-5-1).

Robin Lehner made 35 saves in his first game since hurting his right knee at Vancouver on Jan. 2. The Ducks’ John Gibson blocked 29 shots.

Chicago’s Patrick Kane assisted on Kubalik’s first goal and extended his point streak to six games, with four goals and six assists in the stretch. The Blackhawks star is five points short of 1,000 for his career.

The game was tied 1-all after the first period.

Jones opened the scoring 3:37 in after Chicago defenseman Connor Murphy lost the puck behind his net. Ondrej Kase backhanded a quick pass in front to Jones, who beat Lehner with a one-timer on the stick side.

About 30 seconds after clanking the puck off the right post, Toews skated down the left side and tied it at 8:13 with his 11th goal. The Chicago captain’s shot from the circle slipped between Gibson’s pads.

Kubalik connected twice in the second to put Chicago ahead 3-1.

The 24-year-old made it 2-1 at 4:20 when he backhanded in a rebound. Gibson stopped Kane’s point-blank backhand shot, but Kubalik shoveled in the loose puck.

The rookie backhanded in another rebound with 7:39 left in the second. This time, Gibson stopped Murphy’s drive from the top of the slot, but the puck popped out to Kubalik at the left side of the net.

Rakell cut it to 3-2 at 2:29 of the third, when he stuffed a rebound of Isac Lundestrom’s quick shot under Lehner’s left pad. Maatta restored Chicago’s two-goal lead 90 seconds later on a high shot from the left point that sailed past Gibson on the stick side.

Ducks right wing and leading scorer Jakob Silfverberg missed his second game with an upper-body injury. Silfverberg, named the Ducks’ lone All-Star, was excused by the NHL from the game in St. Louis on Jan. 25 to be with his wife for the anticipated birth of the couple’s second child.

The Ducks will visit the St. Louis Blues on Monday.