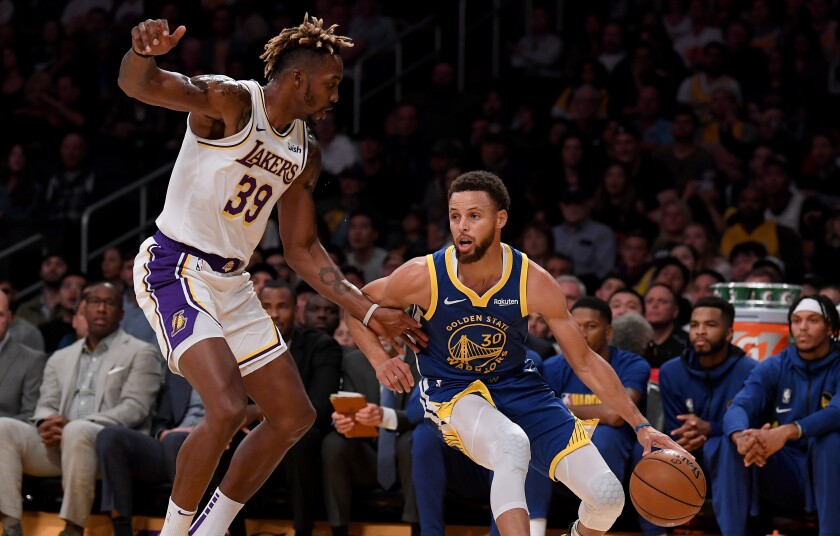 Dwight Howard started at center for the Lakers on Monday night against the Golden State Warriors, and JaVale McGee came off the bench.

There was no drop-off when either Howard or McGee was in the game, which can only benefit the team if both are able to sustain their high level of play.

Howard had 12 points, 13 rebounds, six assists and one blocked shot in 22 minutes and 19 seconds.

McGee had 11 points, five rebounds, one assists and one blocked shot in 17:01.

“Those guys are a huge part of what we hope to accomplish this year,” Lakers coach Frank Vogel said after his team defeated the Warriors 104-98. “They’re pivotal in our rim protection, our rebounding, our physicality. Both of them are giving us something offensively with the lob threat, playing out of the post. There’s no drop off. They play a tag-team by committee at the center position, and we’re getting really strong play from those guys.”

Howard was just two-for-four shooting from the field, but he made eight of 10 free throws.

He also had four steals.

Howard started his second exhibition game, while McGee has started one.

“Every time we step on the court [it’s] to be the best we can be for this team,” Howard said. “It’s not often that you have two guys that can play the same position, can give you the same energy, the same effort, night in and night out.

McGee was four-for-six shooting from the field, including knocking down a three-pointer in the second quarter.

“I mean, I’ve always been comfortable shooting threes,” McGee said. “I shot threes in college. I was just never able to [in the NBA]. I never was allowed to.”

Nevertheless, the role for McGee and Howard will be the same. Both will be asked to play defense, set screens, roll to the basket for lobs and collect rebounds. And make sure power forward Anthony Davis does not have to play at center.