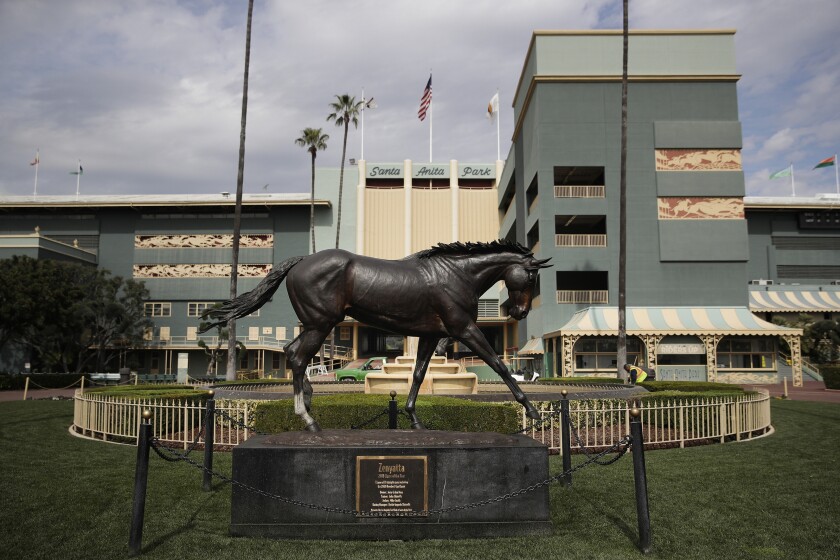 One thing about horse racing is that it has no shortage of characters. Sometimes it’s the superstitious trainer or jockey or the gambler, whose eyes for the big score often exceed their wallet. And sometimes it’s a person who showed up for work every day for 75 years, working just outside the racing office shining shoes.

Such was the story of Eddie Logan, who in 2006 had a race named after him at Santa Anita. Sunday was the 14th running of the Eddie Logan Stakes, a minor race compared to those on Saturday’s opening day. Its purse is only $75,000 and the race is restricted to 2-year-olds going a mile on the turf.

This year’s winner was Encoder for trainer John Sadler and jockey Joel Rosario.

Sadler was being interviewed on the track’s public-address system when he went off script about his winning colt.

“I would like to mention Eddie Logan, the race was named after him. He was here for 100 years,” Sadler said only slightly exaggerating. “A great guy. I hope you’re watching upstairs.”

Sadler broke away to talk to a couple of reporters and didn’t change the topic.

“Not that many of us remember him,” Sadler said as he and Mike Willman, director of publicity at Santa Anita, spontaneously started trading Logan-isms.

“We can get it together.”

“This leather’s got four things working against it on the backside. Salt, brace, alkali and urine.”

The story goes that Logan was a former boxer and Negro League baseball player. He was a favorite of trainers, such as Sadler and Richard Mandella, and the general public, who would go out of their way to find his shoeshine stand.

“I haven’t had my shoes cleaned since he died,” Sadler said. “He was there every day and never missed. I’d stop in for a shoeshine and he would make you smile or laugh every day.

“He had a history of being a real racetrack character. … He always had something good to say. He lived so long his last wife was a nurse. That’s a good choice.”

With reminiscing over, Sadler returned to talk about his colt’s victory.

“He’s been a little unlucky,” Sadler said. “In the Breeders’ Cup [Juvenile Turf Sprint, where he finished sixth], he had to check on the backside and he got beat by a couple lengths. Turf racing can go like that.”

On Sunday, Encoder got a near-perfect trip as Goliad and Smooth Like Strait went head to head with fast fractions. By the top of the stretch they were done and Encoder was the leader, winning by half a length.

“It looked like the two horses on the lead were running pretty good and I just followed in behind them,” Rosario said. “John [Sadler] said to let this horse place himself, and that’s what he did. When I asked him, he picked it up really nice.”

The cofeature was the Blue Norther Stakes, with the same conditions as the Eddie Logan but for fillies. Laura’s Light broke sharply and went for the lead and held it until the finish line. The winning margin was 3¼ lengths for the Peter Miller-trained filly. Abel Cedillo was the rider, his third victory on the way to four on the day.

Santa Anita, with two days in the book, will return for a New Year’s card Wednesday.